3D Printing on Kickstarter: A Fast Filament Extruder for Less than $1,000 and 3D Printed Houses to Match Your Own

With deep roots in maker culture, 3D printing endeavors often find themselves turning to crowdfunding, and Kickstarter has been a mainstay in funding new companies, technologies, and projects. We often hear about the latest and greatest 3D printing-related Kickstarter campaigns, whether people are trying to raise money for 3D printing materials, 3D printed or smart products, and even 3D printers themselves.

Speaking of 3D printer crowdfunding campaigns, earlier this summer we took a look at the FDM Obsidian printer, which reached its original funding goal in just three minutes. We heard from Alwyn Hartman this week – the founder and CEO of Protea Design and a friend of the Obsidian team – who recently launched his own Kickstarter campaign.

Tokyo-based Protea Design specializes in product design, and has created a filament extruder that, in the company’s words, “blows the competition out of water in every category.” The company was looking for a filament extruder that would be able to fill all of its needs and was coming up short – they were all either too slow, too expensive, or too inefficient.

The DNA Extruder, which comes in a unibody shell, is capable of extruding one full roll of filament in an hour, and Protea says that it’s the fastest extruder currently available that costs less than $1,000, thanks to its thermoplastic extrusion screw and barrel design. This combination also allowed Protea to reduce the machine’s overall size, and the specific thermoplastic extrusion improves mechanical operation through a direct motor connection and helps to promote higher pumping pressure to extract air and water vapor from the filament.

The device can reach a maximum temperature of 250°C, so you’re able to extrude most common 3D printing materials, like ABS and PLA. The DNA Extruder is supported by an easy-to-use PID controller and an internationally compatible power supply, and it has a hopper that can hold 1 kg of pellets. Each one comes function tested and pre-assembled, based on customer specifications, and there are plenty of early bird rewards still left on Kickstarter – $600 gets you the DNA Extruder, a pack of six different nozzles, and your choice of 1 kg of either ABS or AP-73 pellets. 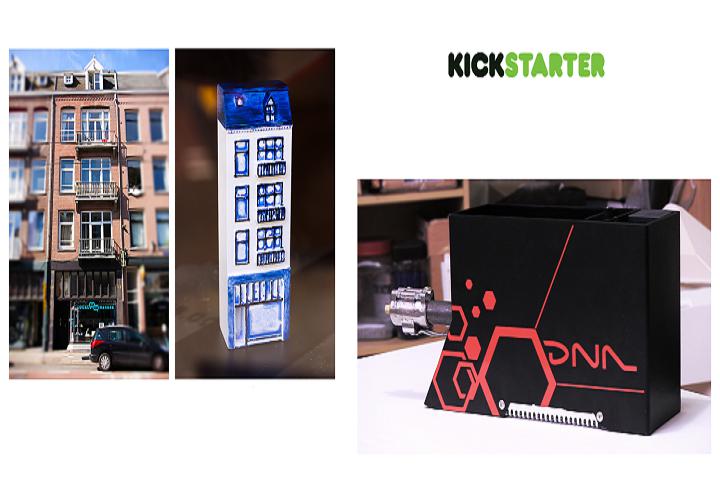 Check out the video below to learn more, though you should note that Protea Design has decided to not continue seeking a patent for its screw and barrel design or the DNA Extruder itself. Please disregard that part of the video, as the team will release the design information as open source, following a successful Kickstarter campaign. They are on their way to their $60,000 goal with 24 days left in the campaign.

A Kickstarter campaign that was recently launched by prototyping company Local Makers in Amsterdam offers a good gift idea for someone who might be feeling homesick. The company, which also sells 3D printers, is offering adorable 3D printed copies of people’s homes.

The two-day process is simple. Once the company’s designers receive a home address to enter into Google Street View, or 2-3 photos of the house (this second option is preferred), they will construct a 3D model of your house. The model is 3D printed, using PLA, on Ultimaker 3D printers, and then sanded and hand-painted, in the Delft Blue style.

There are two available house sizes: the smaller version runs 6 to 9 cm, while the slightly larger option is 10 to 13 cm. The roof will be painted blue, and the details of each house will only be designed and painted on the front and sides of each house, though there are limitations to details the designers can create.

With just 12 days left in the Kickstarter campaign, Local Makers is just halfway over its €8,500 funding goal. There are still plenty of early bird specials left: an €85 pledge will get you the smaller 3D printed version of your house, while a pledge of €120 will get you the larger version.

Please enable JavaScript to view the comments powered by Disqus.