Villa Lewaro, the Palladian estate built in Irvington, N.Y., by Madam C.J. Walker, a child of slaves who became a beauty mogul and the first female self-made millionaire in the United States, is pretty far, geographically speaking, from Paris — about 3,605 miles.

But that’s where the couture shows came to a close, with a — what to call it? — installation, performance piece, happening from Pyer Moss, courtesy of Kerby Jean-Raymond, the first Black American designer to be officially invited to show on the couture schedule. Or to be livestreamed on it, to be accurate.

That’s where they concluded two days late, because the originally scheduled Pyer Moss debut had been rained out by the aftereffects of Hurricane Elsa.

And where a model was strutting down a raised runway in a satin rust-colored tuxedo robe jumpsuit and grand, floor-length hooded cape made from thousands of ... not paillettes, not crystals, not caviar beads but hot rollers. Each one wound round and round with strands of fake hair.

An organza dress with a fridge for a front, complete with message in the magnets.

This cape of hot rollers took two weeks to create.

This was after Elaine Brown, the only female leader of the Black Panthers, had made a fiery tour of the runway, preaching the history of the party and demanding, “Where do we go from here?”; after 22Gz, an artist from East Flatbush, N.Y., where Mr. Jean-Raymond grew up, had taken to a podium and started to rap amid a troupe of white-suited male dancers in the middle of a catwalk parade that also included a black tiered gown cut to the thighs in front with a leather bodice that looked an awful lot like a gas mask and a giant leather hand, kind of like a baseball mitt and worn like a cloak hugging the body from shoulder to knee, a mop pinned between the curves of the “fingers” and swishing languidly along the floor at one side.

And it was before a short, ruffled cocktail frock appeared, with the frills at the back furled like rose petals and the front obscured by a refrigerator. Complete with fridge magnets. That spelled, “But who invented Black trauma?”

It was pointed and kitschy at the same time: a little Claes Oldenberg giant “Clothespin,” a little Moschino, a little P.T. Barnum and entirely Mr. Jean-Raymond. Each look/soft sculpture correlated to an invention on a list that the designer had seen at the Library of Congress attributed to a Black individual (or culture: chess, the subtext of a harlequin patterned pantsuit, which originated in Africa) and now core to everyday life.

So perhaps it would be more accurate to say that’s where a new era of couture shows, one with a different promise of what is possible, began.

Because what Mr. Jean-Raymond, who has become a star of New York fashion, thanks to highly considered shows that take as their guiding principle the reclamation of the Black role in shaping American history, offered up was not just an argument for his own big ambitions as a designer of high fashion — for his desire to be “the next Prada, Bottega Veneta, Maison Margiela,” as he said in a call before the show. It was a new definition for what could constitute “couture.”

Similar to Demna Gvasalia, who put denim and parkas on his Balenciaga couture runway, and Iris van Herpen, who treats laser cutting and 3-D printing as if it were a needle and thread, Mr. Jean-Raymond is part of a new generation of designers that plays by the rules of the most traditional, elitist form of fashion while at the same time reinventing them in their own image.

Though Mr. Jean-Raymond applied for official designation from the Fédération de la Haute Couture et de la Mode through the usual formal channels, his couture is not, and was never meant to be, ye olde French couture. It’s more like couture-ish. 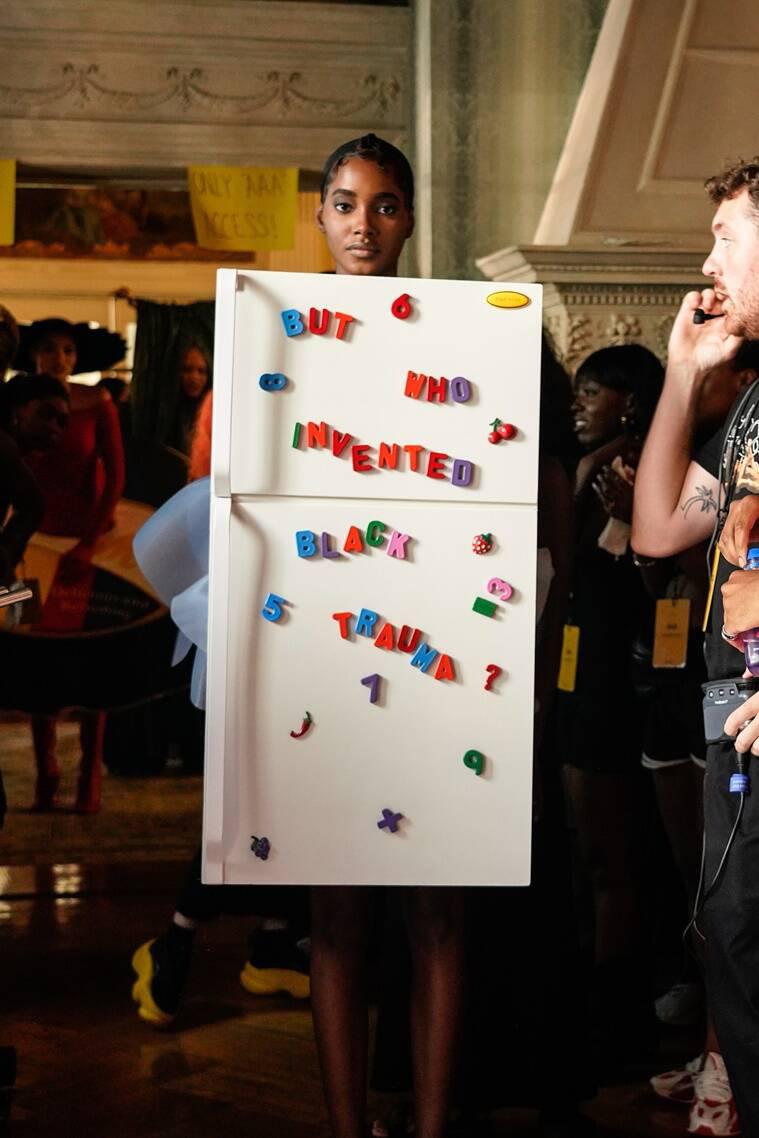 (Through Your Friends in New York, a group Mr. Jean-Raymond created to support designers who may have been marginalized or exploited in the past because of the color of their skin, their sexuality or their gender, he had become close to the Kering group, the luxury conglomerate, and Francesca Bellettini, the chief executive of Saint Laurent, became his couture sponsor.)

He doesn’t have, for example, a classic atelier: He put together teams he met in Los Angeles after a stint on “Insecure,” which included costume designers and the petites mains of Pixar and Imagination studios. (The runway pieces had to be shipped across the country on the kind of trucks that normally transport racecars.)

A model in a lampshade hat and matching dress (right), plus a model wearing a sandal on her back (far left) and another wearing a bicycle chassis (left).

He’s not going to be hosting fabulously wealthy clients in a plush, mirrored salon where they can try on the collection and order pieces made to their specifications at their leisure. The creations are going to be sold by a gallery as is (he is currently in negotiations), take it or leave it. And though “heritage” and “patrimonie,” two of the most closely-held tenets of couture, play a key role in his work, it’s not heritage in the sense of handwork and savoir-faire, but the larger political and cultural sense.

Mr. Jean-Raymond’s strength as a designer has never been so much silhouette, intarsia and magic of line as his ability to imbue his garments with substance — not to blah blah blah about beauty in the world but to “reverse the ratio of Black people’s contribution to the culture to refuel the Black imagination.”

“Couture shows attracted such a specialized audience,” Mr. Jean-Raymond said beforehand. “Sultans, queens, the wealthy elite. We don’t have a Black answer to that.”

The clothes are almost beside the point. Which is not to say they aren’t worth considering — though some of the pieces, like a giant wearable peanut butter jar (George Washington Carver was a peanut pioneer), would not remotely qualify as clothes, and others lacked the subtlety and finesse normally associated with couture.

But a white double-breasted jacket atop matching trousers, with a typewriter (inventor: Lee S. Burridge and Newman R. Marshman) cummerbund and an airy train of loose leaf paper? A lilac dress shirred on the bias with a teardrop of skin at the throat beneath a lampshade dripping crystals (co-inventor of the electric lamp: Lewis Latimer)? A gold T-shirt minidress pieced together from hundreds of metallic discs beneath a lock headpiece (inventor: W.A. Martin)?

After the show models assembled for a group photo on the steps of Villa Lewaro. Note the lock headpiece on the gold dress. (W. A. Martin patented the lock in 1889.)

Those pieces someone — maybe Kiki Layne, sitting front row; or A’Lelia Bundles, the great-great-granddaughter of C.J. Walker and her biographer; or Vice President Kamala Harris, who chose a Pyer Moss trench coat for one of her inaugural appearances — could wear with aplomb.

At the end of the show, Mr. Jean-Raymond led his whole team onto the runway for a bow, pausing to hug a man seated in the front row: Richelieu Dennis, the Black businessman who bought Villa Lewaro in 2018 with plans to restore it and make it an incubator and center for Black women artists and women-run businesses, just as once upon a time it was a center for the artists and intellectuals of the Harlem Renaissance.

Mr. Jean-Raymond’s couture, which will now be exhibited at the mansion, was just the start. In all sorts of ways.