All Blacks player ratings: Who stood out against Tonga in opening test of 2021?

All Blacks player ratings: Who stood out against Tonga in opening test of 2021?

Will Jordan bags five tries for the All Blacks.

OPINION: The All Blacks have opened their season with a 102-0 wallopping of Tonga in Auckland on Saturday night.

It was always expected to be heavy one-way traffic, and indeed it was, at New Zealand’s newest test venue – Mt Smart Stadium.

Here are Stuff’s All Blacks player ratings from the rout.

Damian McKenzie: Started the scoring with fine second-minute finish in the corner. Changed tack early to put boot to ball, and sent off some beauties. Was always going to dazzle, but showed some quality touches as second playmaker, albeit with a few untidy moments in distribution. 8

Will Jordan: First start in the black jersey and showcased all his class, becoming just the second player (with Jeff Wilson) to finish with five tries in a test for the ABs (behind Marc Ellis’ record six). Strong under the high ball and sliced the Tongan defence to pieces, with game-high metres (150) and defenders beaten (seven). Only blot of copybook was an awful pass to Bridge near own tryline. 10

Will Jordan scored five tries in the massive victory over Tonga at Mt Smart Stadium.

Rieko Ioane: All of a sudden the senior midfield man, despite just his second test start there. Mostly played provider, before scoring a beaut on the hour-mark. 7

Quinn Tupaea: Much, much tougher tests to come, but a strong debut nonetheless, with many trademark hard carries into contact, but also a sharp passing game in his 63 minutes. Good nous with quick throw leading to a try, too. 8

George Bridge: Scored four against Tonga in 2019, but didn’t look like getting one here... until strolling in after the siren, which also brought up the hundred. Put recent injury troubles behind him with a game-high seven clean breaks and a reminder of his pace and skill, apart from one bad knock on in front of posts from a bad Jordan pass. 9

Richie Mo’unga: Had first chance to impress in the No 10 jersey and enjoyed the easy ride in his 55 minutes, including scoring a runaway try. Slid a few conversions wide with 7/11 off the tee. 7

Brad Weber: First start, some six years after his debut, and it was bittersweet, with a hat-trick of tries, but then a 55th minute exit thanks to injury. Showed off his trademark support lines and pace. Can he keep Perenara out of the No 2 halfback spot? 8

Luke Jacobson: Showed all the hunger after missing out last year in what was his first start in the black jersey. Was an immediate presence with ball in hand, and showcased his outstanding link play. Well-deserved try early in second spell. 9

Luke Jacobson was impressive in his first outing back in the black jersey.

Dalton Papalii: Backed up impressive Super form. Easy fifth-minute try, then brilliant 25-metre surge for his double. Was also the one to snaffle Tonga’s first-half 5m lineout. Replaced on 53 minutes. 8

Akira Ioane: Allowed to be at his rangy best, where he carved off real estate in wide channels, with his 97 metres the most by any forward. Kept working till the end, with ripped ball putting Tuipulotu away. 9

Sam Whitelock: The stand-in skipper had two more test caps than the entire Tongan 23, and this might just go down as the easiest. Helped Jacobson barge over for his maiden try. Made a game-high 15 tackles without a miss. 8 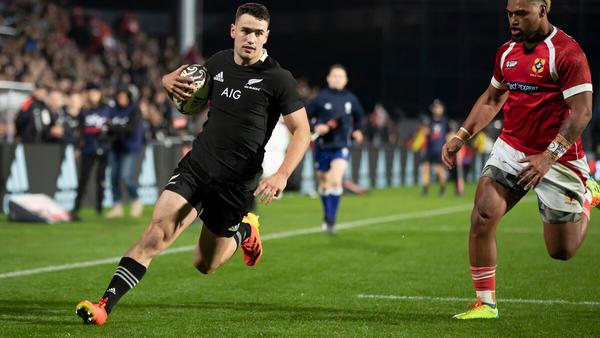 Scott Barrett: Showed he was up for the physical stuff with many a hard carry, but then also a swift swoop on the pill to lead to Mo’unga’s try. Replaced in the 63rd minute. 7

Angus Ta’avao: Will be satisfied with his showing on recall after a year out. Fine surge and offload for Weber’s second try, and eight tackles without a miss. 7

Dane Coles: Forget dual playmaker, what about triple playmaker? The 34-year-old enjoyed a chance to roam wide, and he was everywhere, showing off ALL his skills, aside from one slip-up with the hands near halftime. 9

Karl Tu’inukuafe: Not many scrums for the big man to enjoy, but put on a huge win near own line, then a battering run a bit later before making way with the rest of the front row in the 47th minute. 6

Asafo Aumua: A second test outing for the exciting prospect. One tidy run and some solid defence. 6

George Bower: Strong first scrum, then flew into his work on both sides of the ball in a fine 33-minute cameo on debut. Nice hands led to Weber’s hat-trick. 8

Patrick Tuipulotu: On the park for final quarter of an hour and cantered away for a try from 40 metres late on. 6

Ethan Blackadder: Fine signs in half hour stint on debut. Nice burst and basketball pass in lead up to Jordan’s fifth try. Heavy defence as well, and a late turnover penalty win. 7

Finaly Christie: Got 25 minutes on debut and brought all his energy from the Blues’ campaign, making multiple good, long supporting runs, as well as defending stoutly. 7

Beauden Barrett: First time on the ABs bench in five years, on return from season in Japan. Introduced in 55th minute and provided some big plays, including a lovely chip kick for Rieko Ioane’s try, as well as some strong defence to win a maul turnover. Drop kicked one of his conversions. 8

Covid-19: Slim hope for level skipping in South Island all but dashed

Covid-19: New wastewater tests in Christchurch could show if virus is in community

No Sam Whitelock, Aaron Smith and Richie Mo'unga as All Blacks head to Perth