According to the latest Military Balance report, global defense spending for 2020 stood at $1.83 trillion, an increase of 3.9 percent in real terms. The annual publication produced by the London-based International Institute of Strategic Studies (IISS) noted that this was only “slightly lower” compared to 2019. Global military expenditures as a percentage of GDP went up from an average of 1.85 percent in 2019 to 2.08 percent in 2020. The Military Balance report further noted that global economic output had been severely impacted by the pandemic, seeing a contraction of 4.4 percent. Despite the economic downturn, military spending has been maintained almost at the same level of the previous year. This at least partly illustrates the growing security competition that is clearly feeding growing military spending. It is unlikely that this trend will reverse in the near term because there is no guarantee that the security environment in the Indo-Pacific will ease up anytime soon.

Commenting on the global military spending, Fenella McGerty noted that about two-thirds of the total hike of 3.9 percent in global military expenditure was contributed by the increase in the defense expenditures of the U.S. and China. The U.S. defense budget saw a hike of 6.3 percent in 2020 in real terms and China’s saw a slight slowing in growth from 5.9 percent in 2019 to 5.2 percent in 2020. She argued that the global defense expenditure could see a slowdown in 2021 with U.S. defense spending set to “flatten.” The Asia-Pacific region is also likely to witness a decline on account of the economic impact of the COVID-19 pandemic. 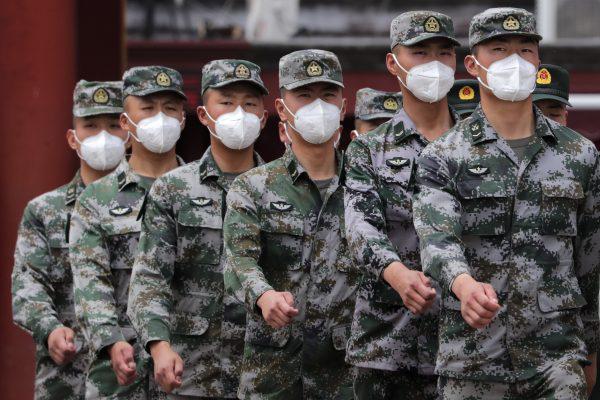 The Indo-Pacific region, outside China, also saw reduced growth in defense spending, declining from 3.8 percent to 3.6 percent. But given the size of the Chinese economy, the effect of China’s slowdown has been marginal. In fact, the Military Balance report points out that China’s defense spending hike in 2020, despite the slowdown, at $12 billion, was still way higher than the “combined defense budget increases in all other Asian states.”

What explains growing military expenditures in the Indo-Pacific? Japan, for instance, has approved a “record” defense expenditure of 5.34 trillion yen ($51.7 billion) for 2021. The approved budget saw a hike of 0.5 percent from the allocation for 2020. Japan’s defense budget has risen for the past nine years, primarily on account of regional threats including China and North Korea. China’s assertive behavior, especially in the maritime domain, and North Korea’s nuclear and missile threats have been cited as important rationales for the continued hike in defense spending. Tokyo has also assigned funding for non-conventional military areas like outer space, cyber, and electromagnetic warfare, all of which have been a focus of China’s People’s Liberation Army, especially after the establishment of the PLA Strategic Support Force.

In similar vein, India too has increased its defense spending for 2021-22. In the budget announced in February this year, the defense allocation saw a marginal hike of 1.4 percent from 4.71 trillion Indian rupees in the 2020-21 budget to 4.78 trillion rupees in 2021-22. In spite of the small increase, what was more significant was the allocation for capital spending of nearly 18.8 percent. This is particularly significant because the negative impact of the COVID-19 pandemic has been significant but it does clearly indicate the government’s priorities for the defense sector in the face of the China threat. In the 2020 revised estimates, the Indian military had received an additional 207.7 billion rupees toward capital expenditure for the emergency acquisition of weapons during the Galwan clash. So, if one were to compare the capital expenditure budget estimates for this fiscal year with the revised estimates of the previous year, the actual increase is merely 5.5 billion rupees. Nevertheless, it assumes importance because of the harsh impact of the pandemic on the Indian economy. As per the World Bank’s South Asia Economic Focus report, India’s GDP is expected to contract by 9.6 percent in fiscal year 2020-21, far worse than the 3.2 percent predicted in June.

Australia, another critical Indo-Pacific power, has also hiked its defense spending. In spite of the pandemic, Australia is estimated to be spending around A$42.75 billion, which is around 2.19 percent of the country’s GDP. Reports note that this trend will continue to reach around 2.38 percent of GDP by 2023-24. Along with Japan and India, Australia has also been at the receiving end of China’s muscular policies, including trade and economic coercion.

The United States, too, continues to be impacted by China’s increased military spending. According to the IISS Military Balance report, China’s military modernization is a driver for “procurement and R&D efforts” of the United States. China’s maritime activism in the South China Sea, East China Sea, and the Indian Ocean, and its growing presence in the Bay of Bengal and Arabian Sea, are pushing all of the major maritime powers, as well as smaller Southeast Asian countries, to step up their capabilities.

In Southeast Asia, the smaller powers are beginning to increase their military expenditures as well. Writing for The Diplomat last year, Thoi Nguyen argued that Vietnam’s defense spending, which was estimated to be around $5.8 billion in 2018 (2.36 percent of GDP), was likely to go up further given that the economy has done reasonably well over the last 20 years. He argued that important geopolitical challenges in the region, including China’s rise, sovereignty and territorial integrity issues in the South China Sea, the nuclear arms race, and the rise of terrorism have pushed Vietnam to step up its defense spending. Similarly, Singapore has hiked its defense spending to around S$15.36 billion ($11.56 billion). Other countries such as the Philippines and Indonesia have also increased their defense spending. In Northeast Asia, South Korea has stepped up its defense spending despite earlier reports that speculated about a possible decline due to the pandemic. South Korea’s Ministry of National Defense has announced that it will spend 52.84 trillion Korean won ($48 billion) in 2021. This is reported to be an increase of 5.4 percent over the allocation in 2000 of 50.15 trillion Korean won.

The negative economic impact of the COVID-19 pandemic has been real for the region. Countries like India and Japan have felt the pinch, with their economies shrinking considerably. But the region’s defense spending shows the security imperatives facing Tokyo, New Delhi, Canberra, and other governments in Southeast Asia are very real also.

This commentary originally appeared in The Diplomat.