Let the dead bury the dead, so said the Omniscient Being that walked the face of the earth about 2,000 years ago. Here, Jesus Christ was teaching his disciples to focus on the things of the kingdom over earthly worries. But the way humanity frets over earthly possessions, power, burials and other vanities shows that scant regard is given to the teachings of Christ.

For weird and, or altruistic reasons, man has continued to worry over the preservation and burial of the dead. Science, religion and tradition have had their fair shares in bothering to give a hoot about treating the dead right.

Plastination is a technique developed in 1977 by German anatomist, Gunther von Hagens. The groundbreaking technique is used to preserve dead bodies by replacing water and fats with certain plastics.

In our nearest English-speaking neighbour on the West African coast, Ghana, burying the dead has been upgraded to a shocking level of creative absurdity. Ghana not only boasts of the world’s largest artificial lake, Lake Volta, the Ga people living in the southern part of the Kwame Nkrumah country also bury their dead stylishly like no other people. The Ga have a deep belief in the afterlife. For them, death is no finality, life continues hereafter. They believe the dead are much more powerful than the living and that the dead could influence the living. This is why families do everything they can to ensure that they curry the sympathy of the dead. This is why they build fantasy coffins for their dead. A fantasy coffin could be shaped in the symbol of the deceased’s profession, vocation, family totem or favourite object. It is thus a common sight to see a driver being buried in a coffin shaped like a car, or a footballer buried in a coffin shaped like a football or a boot.

Back home to Nigeria. Going by the primitive acquisition of wealth and hypertensive worry over material possessions by the political class, it won’t be out of place to know in what type of caskets Nigerians would love their political leaders buried when they die. I’m very sure that a cross-section of Nigerians would wish a vast majority of Nigerian politicians was buried in bullet, condom, spear, maggot and padlock-shaped coffins – to show the disdain in which they hold the political elite.

But there is a panacea for the odium against the political class. Everyone in the land knows the cure for the bitterness, poverty, want, scourge, suspicion and hate in the land, though no one is willing to force the pill down the throat of the 57-year-old toddler nation. And Nigeria will continue to grapple with darkness, thirstiness, hunger, diseases, ignorance and high mortality, all because she fails to take the potion called restructuring. The restructuring pill, depending on the manufacturing pharmaceutical company, also goes by the names – true federalism, devolution of powers, resource control, regionalism, self-determinism, equity, etc. But it is one sure cure for our ailment.

Why is it difficult for the political class to restructure the country? The experience of the Editor, The PUNCH, Mr Martin Ayankola, at the Obafemi Awolowo University zoo about three decades ago offers an explanation.

The young Ayankola had visited the zoo during his undergraduate days in the 1980s. The striking resemblance between gorillas and man held a fancy for the young undergraduate. So, off to the enclave of the hirsute creatures he went. There, he threw sweets into the steel cage. As the sweets zoomed high up through the air, the eyes of all the gorillas followed them even as they descended right down into the midst of a band of young gorillas having fun on the sunny afternoon. Poh! Poh!! Poh!!! The three ‘Trebors’ thudded on the grass.

As if a mischievous gorilla among the band had released a sickening, noisome fart, all the young, able-bodied gorillas, who had been jumping and falling over one another, suddenly broke up and slunk away, leaving the ‘Trebors’ conspicuous on the grass. Sshwah! Sshwah! Sshwah! Heavy footsteps rustled dry grass somewhere at the rear of the cage.

Unabashedly, the living head of the autonomous primate community, a massive 230kg gorilla, sauntered forward, swaying like a content despot. Majestically, he ambled to the ‘Trebors’, picked them up, tried to unwrap one of them, but his stumpy fingers won’t allow such a desire.

Brooking no patience, he put the ‘Trebors’ in the hollow of his left palm and snapped them. He opened his palm and still tried to unwrap some of the peppermints, but the wrap won’t reveal its content. Nonsense! One after the other, he tossed the wrapped ‘Trebors’ into his mouth. Only God knows what the taste did to his sense of self-worth, he rose to his mighty feet, let out a frightening guttural cry and rained blows on his chest. Case closed. This is the way of the jungle. Might is right. Though the ‘Trebors’ could go round all the apes if shared equitably, fairness is an alien word in the jungle lexicon.

Sadly, this is the way of our political class and the reason why restructuring sounds like a dirge. In the lair, the lion’s share is not the majority of the share, it is the whole share. After having his fill, the king lion leaves the carcass for the rest of the pride. 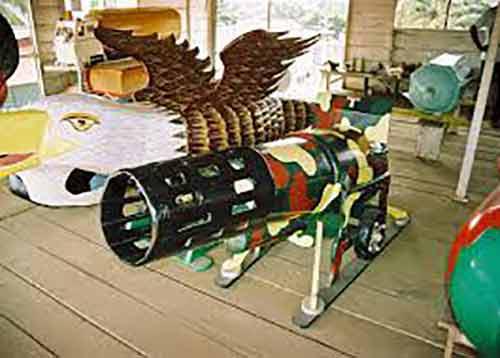 It’s time for sleeping giant to wake up

The other day, I asked my little daughter if she could recite the American pledge, and off she went: “I pledge allegiance to the Flag of the United States of America, and to the Republic for which it stands, one nation, under God, indivisible, with liberty, and justice, for all.” Ummhh!? Can you recite the Nigerian national pledge, I asked curiously. “Yes, I can,” she replied eagerly. “I pledge to Nigeria my country; To be faithful, loyal and honest, to serve Nigeria with all my strength, To defend her unity and uphold her honour and glory, So, help me God.”

If the words of a pledge were a measure to determine nationalism, the Nigerian national pledge dwarfs the American pledge. Unfortunately, however, the Nigerian pledge offers no promise of liberty, equity and justice, which are fundamental bricks of nationhood, and which the American pledge did not fail to address. Maybe, this is the reason why Nigerian leaders have abysmally failed in restructuring the country and bluntly refused to fulfil their part of the social contract. I learnt at the election petitions tribunals that you don’t get what you don’t ask for.

The ‘point-and-kill’ Oshodi-garage mentality of the winner-takes-all among our geopolitical zones over revenue allocation would cease if the nation frees its boundless energies in the regions by devolving power from the centre and sharing it equitably among the federating units. Kaduna State Governor, Mallam Nasir el-Rufai, identified some of the problem afflicting Nigeria when he delivered a speech on restructuring in September 2017 at the Chatham House, London, lamenting the 53 per cent of national revenue being controlled by the Federal Government while the biggest but maltreated cash cow, Lagos State, and the 35 states of the federation and Abuja share a miserable 47 per cent.

Recalling that some of the most enduring institutions in Nigeria were built by regional governments, el-Rufai said it was impossible for a centralised police force to produce security for nearly 200 million people just as he spoke against the exclusive control of over-crowded prisons and ‘unmanageable number of federal trunk roads and railways’.

The governor, who recalled an article he penned in 2012, “A Federation without Federalism,” said that the broad consensus among Nigerians was that ‘our federation had been dysfunctional, more unitary than federal, and not delivering public goods to the generality of our people’.

In a telephone chat with me during the week, Professor of Sociology, University of Lagos, Lai Olurode, said restructuring remained the way out of the country’s myriad challenges, adding that Nigeria’s population was a game-changing asset.

He said, “Every part of the country needs a fair deal. We must emphasise governance, not politics. We must reassure the North, no part should feel threatened. We need to void the administrative waste and greed at the centre, and this would ensure fairness, equity, competition and more effectiveness. Each region would develop and cater for the needs of its people. Abuja is too far away from the people.”

The bleeding scars of Nigeria’s unitary federalism can be seen in the guillotining Lagos-Ibadan Expressway, the ratty Apapa Road, the trillions of naira spent to procure darkness, the illusory Second Niger Bridge and Fourth Mainland Bridge, intractable erosion scourge in the South-East; the sinful environmental pollution in the Niger Delta, spine-chilling Boko Haram evil in the North, and the general milieu of backwardness across the country.

The time to heal our land is now.

Odesola wrote in from the United States of America

Copyright PUNCH.All rights reserved. This material, and other digital content on this website, may not be reproduced, published, broadcast, rewritten or redistributed in whole or in part without prior express written permission from PUNCH.