Stanfield, 26, of Bossier City, Louisiana, defeated reigning Pro Stock champion and Elite Motorsports teammate Erica Enders in the semifinals and dispatched No. 1 qualifier Greg Anderson in the final with a pass of 6.652 seconds to Anderson’s 6.660.

“Back-to-back finals, I couldn’t have dreamt of this,” said Stanfield, the No. 6 qualifier in the Janac Brother’s Camaro SS.

Brittany Force completed a sweep of the Top Fuel No. 1 qualifier honors for the three-race NHRA Camping World Drag Racing Series Western Swing in the Flav-R-Pac Chevrolet dragster with a run of 3.741 seconds. Force has earned the top qualifier in five of the 10 races to push her career total to 25. Force lost in the second round of eliminations.

John Force advanced to the semifinals in Funny Car, driving the PEAK/BlueDEF Chevrolet Camaro SS from the No. 12 qualifier spot. Force, who has two victories and a runner-up this season, moved to third in the standings through 10 races.

Teammate Robert Hight, who picked up his 53rd career Wally and second of the season a week earlier at Sonoma Raceway, was the No. 2 qualifier in the Automobile Club of Southern California Camaro SS. Hight fell in the second round on a holeshot. He is fourth in the standings.

Stanfield, earning his fourth win in 30 career Pro Stock races, prevented Anderson from tying Wasrren Johnson’s 97 career wins for most in the category and second to John Force’s NHRA-record 153. Anderson registered his eighth No. 1 qualifier honor in nine Pro Stock races in the HendrickCars.com Camaro SS and became the first Pro Stock driver to clinch a spot in the Countdown to the Championship.

Stanfield, the 2020 Constant Aviation Factory Stock Showdown champion in the Janac Brother’s Chevrolet COPO Camaro, is confident he’ll be a title contender in the Countdown.

“I have some great guys working on my hot rod and if I can do my job behind the wheel I think we have a really great shot,” he said. “It’s cool to be able to race against him and that milestone he trying to accomplish, but I’m glad we got him stopped today.”

Anderson, the points leader, advanced to his fifth final round of the season and 163rd of his career. He defeated KB Racing teammate Kyle Koretsky, the No. 5 qualifier in the Lucas Oil Camaro SS, in the semifinals.

Chevrolet Nitro and Pro Stock drivers will be joined by COPO Camaro competitors in the Constant Aviation Factory Stock Showdown Aug. 13-15 at the Menards NHRA Nationals presented by PetArmor at Heartland Motorsports Park in Topeka, Kansas.

WHY ARE YOU GOING TO BE A THREAT IN THIS COUNTDOWN?“I have some great guys working on my hot rod and if I can do my job behind the wheel I think we have a really great shot.” 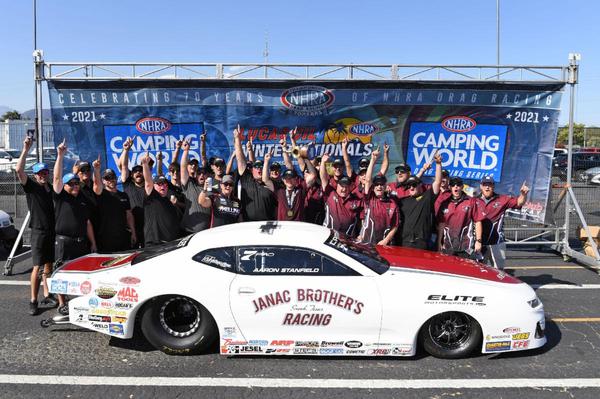 WALK US THROUGH YOUR RACE DAY.“It was a tricky racetrack today. The crew chiefs really had their work cut out for them. Right before that final round they studied, did a lot of work, made a lot of changes and obviously it seemed to work out really well.”

WHAT’S IT LIKE BEING IN THE MIDDLE AS ELITE MOTORSPORTS REVELS IN PREVENTING GREG ANDERSON FROM GETTING THAT MILESTONE?“Our drive is to keep him away from it as long as possible. I would imagine that one day he is going to get it, but we want to make it as hard as possible. But the KB-Elite rivalry is great. They’re both very competitive teams and it’s cool to be in the middle of it and have the chance to win. I’m very grateful for the opportunities I’ve been given.”

WHAT DID YOU DO MENTALLY TO PREPARE FOR THE CHANGING TRACK CONDTITIONS?“That’s definitely something as a young driver that I’m still figuring out. It was really loose for us out in the middle of the racetrack, so it definitely was an adjustment. I just went in with the mindset of not get too complacent and expect anything because you never know what could happen the first 700 feet. They did a great job with the car today.”

WHAT DO YOU THINK IS THE REASON YOU’VE BEEN ABLE TO ADAPT TO THESE CARS SO QUICKLY?“I’m extremely hungry and I have a lot of great people around me. I want to do well and continue to do well. I’m just thankful for the people I’m around and for the people who have given me these great opportunities.”

WHAT DID GREG SAY TO YOU AT THE TOP END?“He told me congratulations. He’s obviously competitive just like I am so I’m sure he’s frustrated; he wanted to win just like we did.”

WHAT COMMUNICATION HAVE YOU HAD WITH YOUR DAD, A FOUR-TIME SUPER STOCK CHAMPION, OVER THIS RUN?“I text with him every single round. He might give me advice here and there on what I might need to look for driving, and things of that nature. He’s taught me everything I know in this sport and I’m very grateful to have him by my side. He wasn’t able to make it here this weekend. He was home at the shop doing my job so I could come out and go Pro Stock racing. He’s been a huge help to me in my career.”

CHEVROLET FROM THE COCKPIT

BRITTANY FORCE, JOHN FORCE RACING, MONSTER ENERGY/ FLAV-R-PAC CHEVROLET DRAGSTER (No. 1 qualifier, fell in second round): “These weekends only make you tougher as a team. We go another No. 1 qualifier but had a second-round exit on race day. Going into Sunday we knew going rounds was going to be a challenge. We missed our shot at Q2, which was a crucial run in the heat to set us up for race day. Luckily, we had a bye in the first round and we laid down a 3.84 in round one, which was an amazing pass on a hot racetrack. In round two, we had holes out at the step and had no chance next to Justin Ashley, who was on a clean run. As a team we pack up and head to Norwalk for Night Under Fire. Match racing will give us an opportunity to go testing and have a little fun. Maybe having a little fun will help us win in Topeka.”

JOHN FORCE, JOHN FORCE RACING, PEAK/BLUEDEF PLATINUM CHEVROLET CAMARO SS (No. 12 qualifier, fell in semifinals): “Today was good. Improved from qualifying. Denny Hood, Tim Fabrisi, they learned from qualifying and that’s what you’re supposed to do. Really had to work hard today, teams and drivers. The conditions made it tough, the track made it tough. The PEAK Chevy, these guys, they put in the work. They love it and I still love it. I’m still in it. Not letting the old man in, he’s creeping on me though.”

ROBERT HIGHT, JOHN FORCE RACING, AUTO CLUB OF SOUTHERN CALIFORNIA CHEVROLET CAMARO SS (No. 2 qualifier, fell in second round): “This Auto Club team has worked hard, not just this weekend, but all year. We have a good car, Jimmy Prock and Chris Cunningham figured some things out in Sonoma and we were doing well. To go out on a holeshot, I’m just not very happy. I missed the mark. Luckily, we only have one weekend off and then we head to Topeka. I’ve done well in Topeka and I’m looking forward to putting this one behind me.”

GREG ANDERSON, KB RACING, HENDRICKCARS.COM CHEVROLET CAMARO SS (No. 1 qualifier, runner-up, points leader, clinched spot in Countdown): “It’s everybody that works on this KB Racing team and all the support we get from the folks at Hendrick, Summit and Chevy. Can’t thank them enough. I’ve got a great car, but I need to win more, no question about that. I’ve got an opportunity to win at every race I go to, and that’s something you don’t get every year. I expect I’ll have that the rest of the year, but I still have to make it pay off, I have to get the job done on Sunday. Even though I’ve had these No. 1 qualifiers, we’re talking about a half a hundredth (of a second) or a few thousandths; it’s not a huge gap. Anyone can win, and it all comes down to that starting line and how good a job the guys do with the car on Sunday. Out of the 16 cars, legitimately 14 to 16 of them can win, and every round is like the final round anymore, and anybody can beat anybody. So that’s great, the class is fantastic. It makes it hard to win. And I feel great that I’ve got a great car, but you have to have everything else perfect, too; the driver’s got to be perfect, the car’s got to be perfect, and the engine’s got to be perfect, too.”

KYLE KORETZKY, KB RACING, LUCAS OIL CHEVROLET CAMARO SS (No. 5 qualifier, fell in semifinals): “I think the weekend overall went well. That last round we just missed a little on the setup. I felt good driving. I thought I was hitting the Tree really good. Just kind of spun out there, the track got really hot. It was 148 degrees and just spun a little bit out of first gear and that was all she wrote. Couldn’t keep in front of Greg in the semis. We’ll go to Topeka with our heads high and a good car.”

About ChevroletFounded in 1911 in Detroit, Chevrolet is now one of the world’s largest car brands, available in 79 countries with more than 3.2 million cars and trucks sold in 2020. Chevrolet models include electric and fuel-efficient vehicles that feature engaging performance, design that makes the heart beat, passive and active safety features and easy-to-use technology, all at a value. More information on Chevrolet models can be found at www.chevrolet.com.