Traversing through the dark world of Demon’s Souls, one may need a friend every now and then. In this Demon’s Souls Remake All NPC Locations guide, we’ll be showing you where to find each and every single one of these people.

NPCs are friendly characters that possess either items for sale or valuable interactions that shouldn’t be missed.

Blacksmith BoldwinLocation: The NexusYou will initially rely on Boldwin for repairs and weapon upgrades until you reach the next Blacksmith. He will also sell you certain items that you might find helpful. Other vendors however, have far more valuable goods compared to his.

Patches, The HyenaLocation: The Nexus, Stonefang Tunnel, and Shrine of StormsLike every Patches there once was, this one too is a scoundrel that seeks to trap you and use your own greed against you. However, if you choose to forgive him, he will return as a useful merchant in the Nexus.

On death, Patches will drop the ‘Thief’s Ring.’

Dregling MerchantLocation: Boletarian PalaceThe Dregling Merchant is a weary survivor of the world of Demon’s Souls with helpful wares to help out the player in their journey.

Filthy ManLocation: Stonefang TunnelThe Filthy Man provides you with items that have very special restoring properties and other basic materials as well that may be necessary for upgrading your equipment.

Filthy WomanLocation: Valley of DefilementYou will find with the Filthy Woman an arsenal of valuable weapons, consumables, gear and materials that may be useful for upgrading your weaponry. She is the only merchant found in Demon’s Souls that sells Rotten Arrows.

Blacksmith EdLocation: Stonefang TunnelEd is the second Blacksmith found in Demon’s Souls. He will allow you to upgrade your items to a superior level, something that Boldwin isn’t capable of. He can also craft boss weapons once you hand him a Red Hot Demon’s Soul.

Once Royal MistressLocation: Tower of LatriaThe Royal Mistress was formerly known as the ‘Former Royal’s Wife,’ and also as the ‘Singing Lady.’ She’s locked in a cell on the fourth floor.

Graverobber BligeLocation: Shrine of StormsHe is one of the many merchants found in Demon’s Souls. Bilge has a variety of consumables, weapons, armor and upgrade materials for the player. He must be set free from his jail cell in the Shrine of Storms and can from then on be used as a vendor.

He will drop the “Graverobber’s Ring’ upon death.

Sparkly, The CrowLocation: Shrine of StormsIf you’re a veteran of the Soulsborne games, you should be well aware of the mysterious crow that rewards you with different items if you provide her with something valuable. She can be found in the Shrine of Storms at the highest point, in a tree with a large nest.

Saint UrbainLocation: The Nexus and Shrine of StormsHe is a pilgrim of God and a believer in miracles. He is able to teach the player different miracles. Patches will ‘assist’ the players in finding Urbain trapped in the Adjudicator Archstone.

If you have killed Patches, then Urbain can be found at the bottom. Once you rescue him, you will be able to find him back at the Nexus.

Upon death, he will drop Saint’s Attire and the Ring of Devout Prayer.

He will leave if you rescue Saint Urbain. Talking to him multiple times will also cause him to leave.

Sage Freke, The VisionaryLocation: The Nexus and Tower of LatriaSage Freke, as the name implies, is a powerful magician and rival to Saint Urbain. He will teach you magic spells if you have a minimum of 10 Magic. Freke’s Apprentice will become hostile if you happen to kill Freke.

Upon death, Freke will drop Venerable Sage’s Attire and the Ring of Magical Sharpness.

To find Freke, head to the Tower of Latria and grab the Special Key from the top of the tower before the boss’ area. You can find it hanging on the wall behind the Dregling.

Go to Freke’s cell and unlock it. Talk to him, and he will appear back at the Nexus alongside his apprentice.

Freke’s ApprenticeLocation: The NexusAs the name implies, this is Sage Freke’s Apprentice and can also teach the player a few magical spells if your Magic is 10 or above. When talking to him, he will ask you to save the Sage himself from imprisonment in the Tower of Latria.

Yuria, The WitchLocation: The Nexus and Boletarian PalaceYuria is a student of the dark form of Soul Arts and can teach you a number of spells. She, however, does not require 10 Magic or 10 Intelligence for you to learn her spells. You can find her locked in the Boletarian Palace, in the Tower Knight Archstone.

On death, she will drop the Ring of Magical Nature, along with all of her attire (Old Raggedy Attire, and Three-cornered Hat).

She can be found after defeating the Phalanx at the Boletarian Palace in the Nexus.

Stockpile ThomasLocation: The NexusThomas is left without a family when the deep fog set in. However, he stands strong and has made the Nexus his new home, and offers the player the ability to store any items that they may be carrying.

Upon death, he drops the Ring of Herculean Strength.

The MonumentalLocation: The NexusThe Monumental is the last of its kind. It belongs to a race endowed with prophetic knowledge. You can talk to him after defeating the first boss in Boletaria Palace. He is found on the balcony above the Archstones in front of a lit candle.

Gives the player the Friend’s Ring.

MephistophelesLocation: The NexusMephistopheles looks for the help of Yurt and is an enemy of the Soul Arts. She can be found on the second floor of the Nexus using the outer staircase. You will have to kill Yurt and have the Pure Black Character Tendency to be able to find her.

On death, she drops the Parrying Dagger, Epee Rapier, Gold Mask and the Ring of the Accursed. 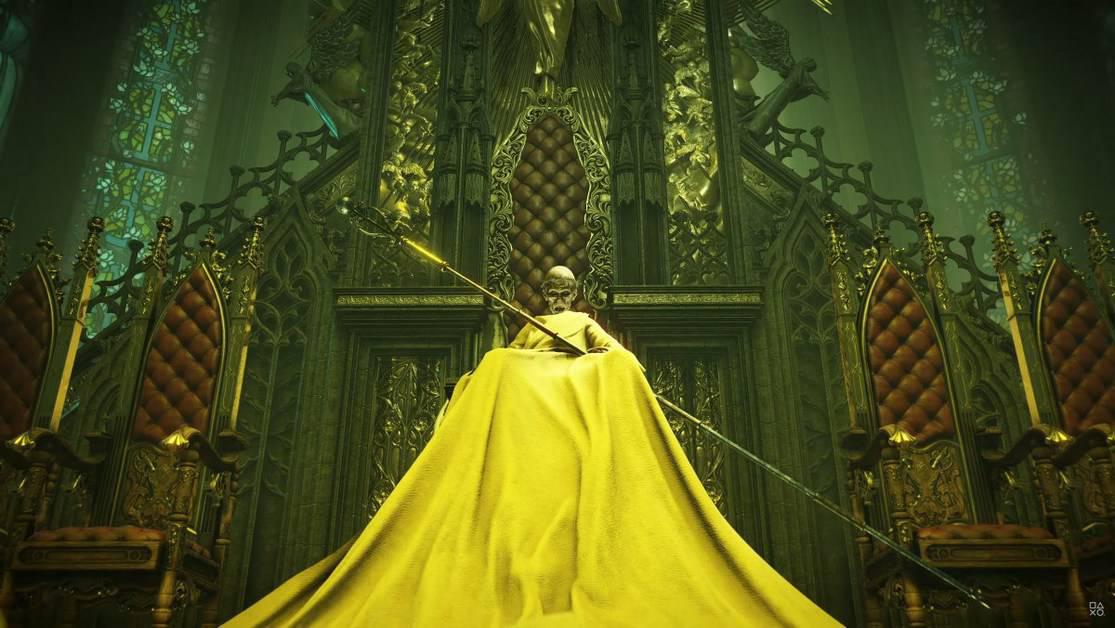 Biorr, Of The Twin FangsLocation: The Nexus and Boletarian PalaceBiorr is a member of the King’s elite duo. Unfortunately, he wasn’t able to keep up with the demonic beings of the fog but does possess wisdom and knowledge regarding Boletaria. He is found sitting near the Valley of Defilement Archstone once you rescue him at the Boletarian Palace.

He can be rescued from his locked jail cell with a key found in the Tower Knight Archstone.

Crestfallen WarriorLocation: The NexusYou can find the warrior sitting in the Nexus in front of the Boletarian Palace Archstone. He will tell you about phantoms in the game and will also point you to the nearby Archstone.

Worshipper Of GodLocation: The NexusShe appears in the Nexus alongside the disciple and talks about a precious stone of hers. You will be rewarded by her with a Pure Faintstone and two Stone of Ephemeral Eyes if you have 20 Faith or above.

She also turns hostile if Saint Urbain is killed.

Acolyte Of GodLocation: The NexusThe Acolyte of God is a religious man who apparently also left Saint Urbain in a trap when he lost his courage. He talks disapprovingly of Patches and will become hostile if you kill Saint Urbain in the Nexus.

Acolyte will drop 175 Souls on death.

Ostrava, Of BoletariaLocation: The Nexus, and Boletarian PalaceOstrava is probably the most well known of all NPCs’ in Demon’s Souls Remake and his location is after the first Blue Knight in Boletarian palace past the fog door. He can be found a second time in the Phalanx Archstone at the beginning in the first room to the left.

He will appear in the Nexus after the second rescue, sitting on a beam between the Stonefang Tunnel and the Shrine of Storms Archstones.

Yurt, The Silent ChiefLocation: The Nexus and Tower of LatriaAfter the Tower of Latria is in the Pure Black World Tendency and all bosses have been defeated. Go back to the locked cage where Yurt would be to find a pile of armor.

Yurt can be rescued in Fool’s Idol Archstone. He is near the first tower where the praying prisoners are. Simply follow the Augites of Guidance to find his cage.

He drops Gloom Set on death.

Executioner MiraldaLocation: Boletarian PalaceMiralda is King Allant’s very personal henchwoman and is known to be extremely brutal, with no signs of compassion.

She can be found at the top of the steps of the pit on the right side in Boletarian Palace, behind the gate. She will try to kill you for being a traitor to the King. Killing her will shift the world tendency back to neutral.

Upon death, she drops the Master’s Ring and the Binded Cross Armor Set.

Old King DoranLocation: Boletarian PalaceDoran is renown as The Last Hero. He is a demigod of the past and a founder of the Boletaria, now locked away in a shrine.

You can find him past the big door behind the Red Eye Knight in the Boletarian Palace. To unlock the door, you’ll need the Mausoleum Key from Ostrava. Prove your worth against him in battle and he will reward you with the Demonbrandt.

Scirvir, The WandererLocation: Stonefang TunnelScrivir is a plunderer who has made his way into Boletaria in pursuit to benefit from the chaos of the people.

You can find him in two forms depending on your World Tendency.

Will appear in Body Form if your World’s Tendency is White. Give him the Dragon Bone Smasher and he will give you the Pure Greystone. And will drop the Ronin’s Ring if killed.

Will appear as a Black Phantom if your World’s Tendency is Black. Drops a Talisman of Beasts if killed.

Lord RydellLocation: Tower of LatriaRydell can be found in a cell. The key to his cell is found on the top of the 1

chain tower in the Fool’s Idol Archstone during Pure White world tendency. He will give you the Dull Rat’s Ring as a reward.

In Pure White World Tendency, he will be at the start of the Shrine of Storms to the right of the Silver Skeleton. He will ask you regarding the Makoto, and if you give it to him; he will attack you with it.

He will appear as a black phantom in the Pure Black World Tendency and will charge at the sight of you.

He will drop the Crest of Vinland, which you can show to her sister as proof. In this state, she will drop her Dull Gold Attire and the Ring of Devout Prayer.

In Pure Black World Tendency, she will appear as a Black Phantom and will cast heal and Anti-Magic field. She also uses Blind that attacks past shields. In this state, she will drop the ‘Blind.’

Garl VinlandLocation: Valley of DefilementGarl is loyal to Maiden Astraea. He can be found in the Dirty Colossus Archstone. If you kill him during the boss fight, he will drop the Dark Silver Shield and Dark Silver Armor.

He appears as a Black Phantom during Pure White World Tendency. Kill him to obtain the Crest of Vinland for Selen’s side-quest. He also drops the Bramd.

And there you have it, All NPCs’ and their locations in Demon’s Souls Remake.