The Taken King brings a brand new patrol activity to Destiny in The Court of Oryx. Here's what it is and how it works.

Destiny: The Taken King - How The Court of Oryx and Runes work

The Court of Oryx and its new consumable, the Rune, is a new way of grabbing Destiny loot added by The Taken King. The Court allows you to spawn your own public events, take down some incredibly tough bosses and be rewarded appropriately. Below you'll find a full breakdown of how the Court works, what Runes are and how to use them, and what to expect in terms of loot-sharing.

We'll be updating this guide with final information after The Taken King launches on September 15, but here's everything we know so far.

The Court of Oryx

The Court of Oryx is a patrol activity set on the Dreadnaught, the new area introduced by The Taken King.

It allows you to spawn your own public events, kill bosses and collect loot.

To access The Court of Oryx, select the Patrol option from the Dreadnaught of your location director, head right from the spawn point, through the door and down the corridor. Watch the video above for the exact location.

You'll be able to see immediately if a public event in progress. You can decide whether or not to get involved in someone else's fight or spawn your own with your fireteam.

If you want to spawn your own boss fight, you need to jump over to a corridor full of totems to sacrifice a Rune. Watch the video above for the totems' location and see the Runes section below for an overview of what they are and how they work.

Watch out for the floor before an event starts: it's toxic!

Different Runes are sacrificed at different totems and correspond to increasing difficulties.

The first is the easiest, recommending a light level of around 190. You'll probably be around this level when you first hit level 40 and you're wearing a mish-mash of armour. The next totem recommends a light level of 240, and so on.

The first totem will spawn one boss. The second spawns two bosses. The third tier contains bosses with completely different mechanics, but we won't know more about that until launch.A fourth tier of bosses apparently exists, and this is raid-tier. Again, we'll know more after launch.

Once you sacrifice your Rune at the totem, the boss (or bosses) will spawn in the centre of the arena. We'll have a full breakdown of the bosses and how to defeat them after launch.

If you sacrificed the Rune to start the encounter you get the most loot. We're a little unsure as to how the loot system will work as yet, but we'll have more on that after launch.

Once the encounter's over, you'll see there'll be a cool-down on your Runes. This gives other members of your fireteam a chance to sacrifice their Runes and grab the biggest share of an event's loot.

Runes are a new consumable in The Taken King used specifically in the Court of Oryx.

You can get them from several places. The Taken King bring with it a new rank for the Tower vendor Eris Morn, taking her to rank 5. After you hit this rank, you'll be able to buy her Runes. Runes also drop from bosses in the Dreadnaught and from certain daily activities, but we won't know the specifics until after launch. 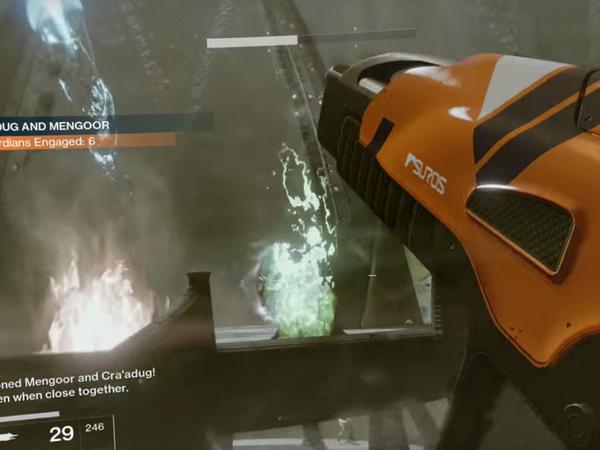 Runes are sacrificed at totems in the Court to summon bosses.

The first difficulty level is tiggered by sacrificing the Reciprocal Rune, and comes with a recommended light level of 190. It spawns a single boss.

The second difficulty level is triggered by sacrificing the Stolen Rune, and comes with a recommended light level of 240. It spawns two bosses.

A third tier of Runes is included in The Taken King, but we won't know more about that until after launch. This tier is said to spawn bosses with completely different mechanics.

A fourth tier of Runes is also said to be included, and this is apparently raid-tier. Better bring your best hat.

You will spawn one of six bosses in Tier 1. Here's the low down on all of them and their weaknesses.

This Cabal boss is easy if you divide the time and skills of your Fireteam. He's only able to use his shield when his adds are around, so two of you should take them out while the third member hammers him at every opportunity.

With a similar method to Bracus Horu'usk, you need to use the Cursed Thrall to your advantage here. Shoot and explode them close to Krughor's shield and it'll will lower, leaving him open to damage. Keep repeating this until he's dead as F.

The problem Lokaar has is when he teleports it weakens him. He's the easiest boss in Tier 1 to defeat because of this. Just lower his shield and them hammer him. He sometimes teleports to the hallway with the statues, so just wait for him to return.

Vorlog has three different shield types. Every time you lower one, when he replenishes it will be another forcing you to switch tactics. Because of this it's best that each member of the Fireteam has a different elemental damage type equipped to combat his Void, Solar or Arc shield.

Three wizards are a pain in the ass. Basically, if you don't kill all three within seconds of each other they respawn. Don't take them out separately, but try to get all three down to around 10 percent health and then go ballistic and nuke them all together. If you don't have your supers try to go armed with rocket launchers that can track targets.

This is a fun fight as you take down two knights; one Hive and the other Taken. Their shields only lower when they're close to each other, so use your Hunter Nightstalker to tie them together. Once one is dead the other's shield won't replenish so it suddenly becomes very easy.

Head back to our The Taken King guide, or get the full deal with out exhaustive Destiny guide.