TORONTO -- George Armstrong, who captained the Toronto Maple Leafs to four Stanley Cups in the '60s and wore the blue and white his entire career, has died.

The Maple Leafs confirmed the death Sunday on Twitter.

Armstrong played a record 1,187 games with 296 goals and 417 assists over 21 seasons for the Leafs, including 13 seasons as team captain. The right-winger added another 26 goals and 34 assists in 110 playoff games.

Known as the Chief, Armstrong was one of the first players of Indigenous descent to play professional hockey.

Armstrong was inducted into the Hockey Hall of Fame in 1975. Some 41 years later, Armstrong was voted No. 12 on the franchise's list of 100 greatest Maple Leafs in its centennial season.

"George is part of the very fabric of the Toronto Maple Leaf organization and will be deeply missed," Maple Leafs president Brendan Shanahan said in a statement. "A proud yet humble man, he loved being a Maple Leaf but never sought the spotlight even though no player played more games for Toronto or captained the team longer. Always one to celebrate his teammates rather than himself, George couldn't even bring himself to deliver his speech the day he was immortalized on Legends Row."

A young Armstrong met Syl Apps when the Maple Leafs star came to his bantam team's annual banquet. Armstrong would go on to wear No. 10, the first Leaf to do so after the retirement of talismanic Cup-winning captain Apps.

Armstrong would also become one of a select number of Leafs honoured with a banner at Scotiabank Arena and his number was officially retired in October 2016 at the team's centennial anniversary home opener.

In 2015, Armstrong and Apps were added to the Leafs' Legends Row.

The Leafs released a statement on Sunday with the words from Armstrong's unread speech that night.

"Hockey is a great game and I love it. I am part of a fading generation that you will never have again. Every one of us is one of a kind, that will never be repeated. To all of my friends and acquaintances, thank you for your advice and direction, that helped make me who I am today ? a very, very happy person."

"The National Hockey League family is saddened to learn of the passing of George Armstrong," Bettman said in a statement. "For 70 years, he represented his beloved Maple Leafs and the entire NHL with class and distinction as a player, coach, executive and ambassador.

"A humble man and revered leader, Armstrong captained the Leafs for 12 seasons -- including to three straight Stanley Cups in 1962, 1963 and 1964 and the stunning 1967 title -- and scored the final goal of the Original Six Era in Game Six of the '67 Final.

"Our game will miss him dearly. The NHL extends its deepest sympathies to George's wife Betty, their children, grandchildren and the entire Armstrong family."

After hanging up his skates in 1971, Armstrong coached the Toronto Marlboros to Memorial Cup victories in 1972-73 and 1974-75 before accepting a scouting position with the Quebec Nordiques in 1978.

He spent nine years with Quebec before returning to the Toronto fold as assistant general manager and scout in 1988. Armstrong served as interim coach for the final 47 games of the 1988-89 season after John Brophy was fired after an 11-20-2 start.

The next year, Armstrong returned to his role as a scout for the Leafs. 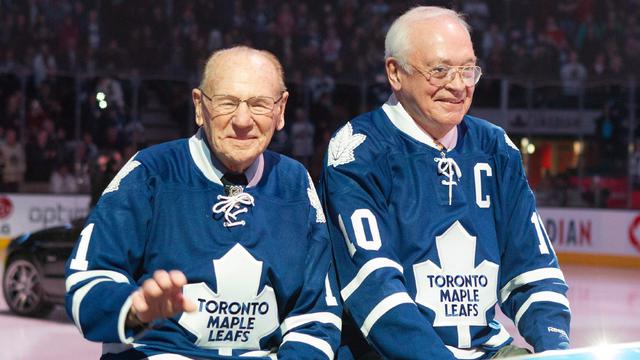 Armstrong scored 20 goals four times during his career but was better known for his leadership and work ethic, helping restore the franchise's winning touch. A smart player and talented backchecker, he worked the angles to get the best shot at his opponent and formed a formidable penalty-killing tandem with Dave Keon.

A humble man, Armstrong was quick to deflect praise. He credited his players for his Memorial Cup wins as coach.

"It wasn't because I was a great coach, it was because I had some great players," he said in a 1989 interview, listing off the likes of the Howe brothers, John Tonelli, Mark Napier and Mike Palmateer.

And he offered a typical response when inducted into the Leaside Sports Hall of Fame in 2015.

"I don't know whether I deserve it or not but I sure am happy to get it," said Armstrong, who lived in several areas of the city before making Leaside his Toronto home.

Born in Bowland's Bay, Ont., to an Irish father and an Iroquois mother, a young Armstrong honed his hockey skills in Falconbridge near the Sudbury nickel mines where his father worked.

The Boston Bruins were interested but Armstrong waited until the Leafs put him on their protected list while he was playing with the Copper Cliff Jr. Redmen of the NOHA in 1946-47. After winning the Eddie Powers Memorial Trophy as the OHA's leading scorer with Stratford next season, the Leafs sent him to their main junior affiliate, the Toronto Marlboros.

He was elevated to the senior Marlies for the 1949 Allan Cup playoffs and helped the team win the title over Calgary the next year.

It was during the Allan Cup tournament, specifically a visit to the Stoney Indian Reserve in Alberta, that he got his nickname. When the band heard of Armstrong's ancestral background, they made him an honorary member with the name "Chief Shoot-the-Puck" and presented him with a ceremonial headdress.

It was a different era and "The Chief" nickname stuck. Armstrong, who was proud of his mother's heritage, would become the first player of Indigenous descent to score in the NHL.

He spent most of two seasons in Pittsburgh with the Leafs' American Hockey League farm team before making the big league. He made his NHL debut in December 1949 and became a full-time member of the Leafs in time for the start of the 1952-53 season.

"It looks as if he's going to be here for quite a long time the way he handled that puck," legendary broadcaster Foster Hewitt said after Armstrong scored his first NHL goal in a 3-2 win over Montreal.

"I did a little war dance that night and I think everybody in Maple Leaf Gardens was pretty happy about it as well," Armstrong recalled 15 years later.

Toronto owner and GM Conn Smythe named Armstrong his captain before the 1957-58 season. Smythe would later call Armstrong "the best captain, as a captain, the Leafs have ever had."

The Leafs won the Stanley Cup in 1962, the first of three straight championships.

Armstrong was 36 when the veteran Leafs won the franchise's last championship in 1967. His insurance empty-net goal with 47 seconds remaining in the clinching 3-1 Game 6 win proved to be the final goal of the Original Six era.

The six-foot-one, 204-pounder played a few more seasons, but suffered a knee injury during the 1969-70 campaign that forced him to retire. Armstrong was convinced to come back for the 1970-71 season before quitting for good at age 40.

At the time, Armstrong had played more seasons and more games as a Maple Leaf than any other player, and was second in career points.