How to prepare for Shards of Domination in World of Warcraft

Wondering how to get ready for the WoW Shards of Domination system coming in the Shadowlands 9.1 update? We know there's a new raid to look forward to with the launch of

, as well as flying in many of the Shadowlands zones. But there was something else none of us expected: a new, confusing power system that'll take plenty of time to prepare for.

There's a lot to take in and consider, so I've gathered as much detail as I can to help you get ready, including what Shards of Domination are, the slots in which they can be equipped, and how Rune Words work. Here's what we know so far about the WoW Shards of Domination system to make your transition to 9.1 seamless.

What WoW Shards of Domination are, and how to prepare

Shards of Domination are upgradable gems you'll be able to slot into any piece of gear that has a Domination socket. This primarily drops from the Sanctum of Domination, the new raid that arrives one week after the long-awaited 9.1 patch on July 6 (July 7 in the UK/EU). Once you have equipped a Shard to a Domination socket, it grants you a passive effect to enhance your character. Shards come in three different types, and you can gain a further bonus—which only activates in specific zones—by equipping three Shards of the same type.

While that all sounds pretty simple, there are various factors you'll need to think about. The main consideration is your legendary items. Depending on your armour type (cloth, leather, etc.), you may need to recraft one or more of your current legendaries into a different gear slot. It may be time to start doing those weekly

Also, make sure you have at least 2000 Stygia put back from the Maw quests for the new Soulfire Chisel. This is a reusable item that will let you swap your Shards with a certain activity in mind. You'll be able to purchase this from Bonesmith Heirmir in Korthia for 2,500 Stygia, though it's unclear whether the item will be locked behind a reputation level.

Shards of Domination gear slots: Where can I equip them?

Each character can equip up to five different Shards of Domination at one time. There are several pieces of raid gear that can drop with a Domination socket, but even that's not quite as straightforward as it might seem.

Every class can expect to see the following gear slots with Domination sockets:

But as that's only covering three pieces of socketed gear—you can get two more. The other item slots that can drop Domination socketed raid gear will depend on the type of armour you wear. These are:

This is important because if you already have a legendary equipped in one of the five slots, you will probably need to craft a new one in an alternative slot.

You can also purchase an additional piece of armour from the Death's Advance Quartermaster, though this will require an Honored reputation level and 2000 Stygia. 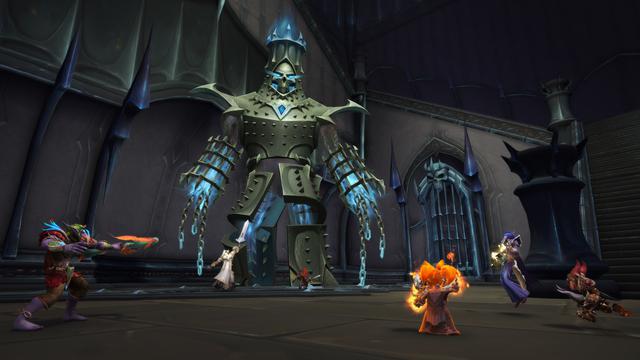 Shards of Domination come in three different types: Blood, Frost, and Unholy. Each has three effects which activate immediately.

It's worth taking the time to see what these effects are when deciding if you want to recraft a legendary. Depending on your role and whether you're into min-maxing, you may decide you can get away with just three or four Shards.

These are the effects we know about so far, with their base level before upgrades:

Shard of Bek: Your damage is increased by 2% when you have 50% or more health than your target.

Shard of Rev: Your Leech is increased by 35.

Shard of Cor: Your damage is increased by 3% for 20 sec after attacking an enemy you have not yet damaged.

Shard of Tel: Your critical heals cause their target to absorb the next 228 damage dealt to them within 6 sec.

Shard of Dyz: Damaging a target increases your damage done to that target by 0.33% for 4 sec, stacking up to 3 times.

Shard of Zed: Your helpful spells and abilities have a chance to grant your target an Unholy Aura, draining 221 health from nearby enemies every 2 sec for 10 sec.

Shard of Oth: Your Speed is increased by 35.

In addition to the above effects, you can get a further bonus—or Rune Word—by equipping three Shards of the same type.

It's worth noting that while the individual Shard effects will work in any zone if equipped, the Rune Word bonus will only work in the Maw, Torghast, and the Sanctum of Domination raid. These set bonuses also require the corresponding gear piece from the raid to be equipped before they can work:

Blood Link: While inside the Maw or Torghast, damaging an enemy establishes a Blood Link. Blood Link pulses every 3 sec, dealing 0 Shadow damage and healing you for 100% of damage dealt. If your Blood Link would overheal you, it instead heals a nearby ally. Limit 1.

Winds of Winter: While inside the Maw or Torghast, each time you deal a critical strike, the Winds accumulate 6% of that effect, up to a cap of 180 per critical strike. Every 20 sec, the Winds unleash, dealing Frost damage equal to the total accumulation and and surrounding you in the Winds for 20 sec, absorbing 100% of damage dealt by the Winds.

Chaos Bane: While inside the Maw or Torghast, your spells and abilities have a chance to drain a Soul Fragment from your target, granting you 10 Primary stat for 30 sec and stacking up to 15 times. When you reach 15 stacks, unleash Chaos Bane, dealing 1500 Shadow damage split between nearby enemies and granting you 300 Primary stat for 15 sec.