How would you go about measuring your emotions? Robert Owen chose colour

Both his public works and gallery installations share the same intent. “It’s using narratives and metaphors to create our own mythology,” he says.

Webb Bridge acknowledges indigenous life around the Yarra. The pedestrian and cycle bridge floats sinuously above the water like an intricate mesh eel trap. Craigieburn bypass bridges rural and suburban histories. Functionally this northern gateway to Melbourne provides a sound barrier and footbridge across the Hume freeway. Metaphorically the bridge curls upon itself like a snake shedding its skin (and frames spectacular views of the city). Its sound walls are etched with abstracted 1950s computer text bearing the names of local plants.

Courtesy of the artist and Arc One Gallery

“I wanted them to look like lace curtains,” Owen says. “At night cars trigger LED lights along its walls to resemble flickering TV screens.”Owen’s fascination with colour dominates the retrospective: a recurring palette of ultramarine blue and variations on the visual spectrum. Both trace back to formative experiences in Europe. In Padua, Giotto’s Scrovegni Chapel shocked him. How could a simple colour elicit such elation?

“Blue is a colour Robert strongly identifies with,” says Sue Cramer, the retrospective’s curator. “It’s the colour that conjures the wonder of the expansiveness of experience and of pure feeling.”

Witnessing a natural phenomenon in Hydra had an equally profound impact: an eclipse of the sun creating a spectacular spectrum. Beguiled from that moment, Owen sought to recreate its numinous light.

“I wanted the spectrum,” Owen declares. “That’s the colour I wanted to see. I was interested in this inner self, that’s the soul inside that’s full of light.”

Like the spectrum itself, Owen explores and expresses colour in wide-ranging formats and materials: from the unorthodox (Maggi stock-cube wrappers with their residue burnt) to crafted Constructivist-inspired aluminium cubes whose floating centres feature diffraction grating (the shiny material seen on CDs), to obsessive variations of geometric and pixelated colour scaled from intimate to wall size.

One of his most spectacular spectrum paintings is Cadence (2003), an enormous 8-metre work. An exercise in exploring the inner self, it has additional personal resonance. The work is an attempt at measuring emotion.

“I made this graph every day of how I felt in the morning,” he explains. “It’s like a biorhythm of the body. At the time you just go I’m feeling that blue or yellowish, this is pinkish and it was just taking a stab of setting up a little system.” 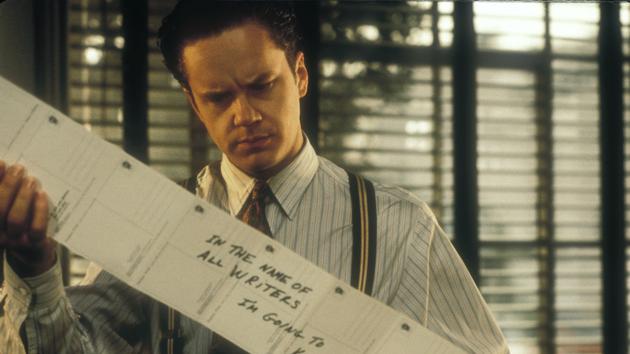 Intuitive yet systematic, Cadence is emblematic of Owen’s approach. He has said he works inside the “science of consciousness”.

It’s not just ideas that are connected, but the senses. Like Kandinsky, and before him the Theosophists, Owen’s interest here is in synaesthesia – the stimulation of one sense involuntarily affecting another. It’s the subject of his ongoing series Music for the Eyes.

“I was trying to match colours to the music I was hearing,” Owen says. Listening repeatedly to Duke Ellington’s jazz classic Mood Indigo, the painting Blue Note (2016) emerged: a canvas of coloured squares that dance like charged particles.

Courtesy of the artist and Arc One Gallery

For Owen, coloured squares and grids are the building blocks of art, stretching from antiquity’s mosaics to computer pixellation. Proof of its endless variation and malleability is Sunrise, a new video work depicting hundreds of permutations of coloured grids on an endless loop.

“Sunrise Terminus from 2017 is entirely abstract and has a lovely sense of light coming almost through a window,” Cramer says. “It’s a stunning work that has never been shown before. It has that gorgeous luminosity that watercolour has and captures that fabulous sense of beauty and colour.”

The exhibition is not all sunshine and light, however. Darker shadows inevitably creep through Owen’s oeuvre; he is acutely aware that he is “European in southeast Asia living on Aboriginal territory”.

In Hammer on Rock (1982) an ominous gong calls viewers to a room installation. Owen’s epiphanic blue spotlights the rock and hammer. Is it simply highlighting the sculptor’s materials? Or a call to prayer over the exploitation of the Earth? Complicating readings, the rock is papier-mache. Is the illusion creativity itself – symbolic of an alchemical transformation of materials? Or is the charged moment simply a hubristic lie – one that can be easily crushed?

“His art doesn’t have a single message,” says Cramer. “It’s experiential and reverent and joyous and probing.”

Owen welcomes the interpretations, then adds his own that punctures historic mythologising and grounds his own narrative. “It’s the Australian continent and there’s been communities here for thousands of years – and we’re treating them like newspaper. It may also be something about me. I may never be Brancusi, but I’ll be something. I’ll be me.”

Blue Over Time, Robert Owen: A Survey is at Heide Museum of Modern Art until May 23; Robert Owen: A Book of Encounters is published by Perimeter Editions, $65.