I don't want to spend an entire review comparing Humankind to Sid Meier's Civilization, but it's very clear that this is Amplitude's riff on that classic 4X melody. While I was delighted by some genuine improvements and innovations on my turn-based march from the Stone Age to the Space Age, most of the basics felt pretty familiar. And more than once, that left me wishing it had pushed the boundaries a bit more, like the studio's previous Endless Space and Endless Legend games did.

One of my favorite little new ideas in Humankind is the Neolithic Era, which starts each run with a small band of nomadic hunter-gatherers who have to collect enough food or science to advance and become a settled society. I enjoyed this unorthodox playstyle so much that I wished I could have spent more time with it, or even remained nomadic. But you eventually settle into a more traditional 4X routine of expanding cities through districts to collect food, science, production, and cash, against up to nine other AI or human-controlled empires.

There are two new resources that mix things up a little. Influence limits how much you can expand externally and spreads your culture to neighboring cities, while stability limits how much you can expand internally, as urban centers that sprawl out further and further become more difficult to govern. These considerations made planning out my empire's path to prosperity an interesting and often challenging puzzle. As a chill tile-painting game in which I can watch my civilization spread across the gorgeous world map, Humankind stands up well against its competition.

Influence is also used quite a bit in the diplomacy system, and this is probably the cleverest idea Humankind brings to the genre. You can just declare war out of nowhere, but doing so gives a large bonus to your enemy's war support, which is a measure of how enthusiastic their people are to fight you. If you instead spread your religion or culture to one of their cities, you can gain a grievance against them for "oppressing" your people, which will slowly tick up your side's war support over time. So to truly be a successful conqueror, you need to be exporting your gods and your top radio hits, not just have the biggest army.

As a chill tile-painting game, Humankind stands up well against its competition.

As neat as this system is, it didn't put a lot of pressure on me unless I went looking for a fight. Even on the higher difficulties, I never had a war declared on me even once over the course of three campaigns. That included when I had a very small army that couldn't have stood up to my neighbors if they’d come knocking. And the Independent People who sometimes gave me trouble were all too easy to pacify with money or influence compared to Civ's sometimes nasty barbarians. It's altogether too trivial to keep everyone happy by making trade agreements, paying bribes, and forgiving your grievances against them.

And while Humankind's battle system has a nice pacing to it, since multiple battle turns can take place within a single world turn, the AI is consistently disappointing. They'll often spread their attacks out over multiple units and then get obliterated when they could have focus-fired and at least cost me a unit on the way out. Not that Civ’s AI is exactly legendary, but the recent Old World showed us that this can be done a lot better. The wars I fought were full of interesting tactical considerations thanks to how much things like terrain and line of sight factor into each engagement, but the fact that I rarely felt like defeat was a possibility made my victories feel rote rather than triumphant.

I'd enjoy Humankind more if they just removed the mid-level map view entirely. 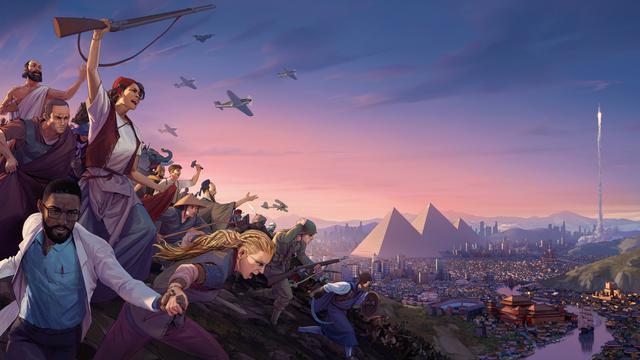 And while the zoomed-in 3D map looks fantastic, Amplitude has tried to go the route of replacing map overlays with a system that gives you different information the further you scroll out. The problem is that both of the higher-level ones look atrocious and you can't turn them off. The mid-level zoom view is a soul-crushing gray void that doesn't give me any useful info I couldn't get on the 3D map, and I'd enjoy Humankind more if they just removed it entirely. And the top-level view, which is at least useful for seeing political boundaries, looks like disorienting neon vomit and gives me a headache. I hate looking at them, and I hate that they hide the rather attractive and realistic terrain and cities. I would compare it directly to Crusader Kings 3, which uses a very similar system, but each of its zoom levels has a clear job and looks great doing it.

The other headline feature is that you'll be choosing a different culture for every era, rather than one that sticks with you through the ages. I really liked this on a mechanical level. For one thing, it means you have a unique unit every era, instead of only for a small part of each campaign. The design of these units and bonuses felt very safe, though. There's nothing as wild or game-changing as some of the more out there civ and leader abilities in Civ 5 and 6, and they typically just provide new ways to generate resources. However, since cultures all have niches like Expansionist or Scientist, you can focus on a different playstyle every era, which is nice in a long campaign where you might get bored of being type-cast as a warlord or a brainiac. And that won't hamstring you, since victory is based on a Fame system that adds up all of your deeds, from conquest to building the biggest cities.

There's nothing as wild or game-changing as some of the more out there civ and leader abilities in Civ 5 and 6.

There is a religion system, but only just. Like the era bonuses for each culture, the bonuses you can add to your faith are mostly simple modifiers to resource generation or modest military buffs. Religion only spreads passively, and unless I was looking for a reason to go to war, I usually forgot it existed. There is a kind of interesting late-game wrinkle in that you can pursue tolerant secularism or militant state atheism, modeling changing ideas about the nature of the universe. The problem is, while this is cool for roleplaying and can generate new conflicts in the case of atheism, it felt like taking away some of my toys since neither of these belief systems get anything to replace holy sites or tenet bonuses.

The culture system also doesn't exactly solve the roleplaying problem of telling a coherent, historical story like I’d hoped it might. Sure, we could say my Khmer realm was conquered by the Ming Empire when I chose them as my next culture, but where did these Chinese bureaucrats come from? Were they hiding in the forest? Outer space? They weren't on the map anywhere before I decided to play as them. This is of course, no siller than Civ's version of this same problem where you have American tribesmen founding the city of Washington D.C. in 4,000 BCE. But it's not necessarily a lot more logical, either.

I was also fairly disappointed with the late game. There is an event chain related to climate change, but in my games it only cost what was at that point less than one turn's worth of income to avoid any consequences at all. And even ignoring it completely only gives you a -30 to all resource production in your cities for 10 turns, which isn’t much by the time it comes up. The map doesn't even change to reflect rising sea levels or growing deserts. Similarly, there is a Pollution mechanic that kicks in once coal becomes available, but hell if I know what it does. The tooltip doesn't explain it. There's no encyclopedia entry about it. And even when I was trying to produce as much of it as possible in my Soviet run to find out, it never got above "Level 0" or had any effect on anything. Downplaying the climate crisis in any game about humanity's near future is not only factually incorrect – it's also really boring game design, giving up on the chance to mix things up and introduce new challenges at a point when you're probably just taking victory laps.

That being said, these narrative events are a nice touch throughout the other ages. They might ask you whether you allow priests of both genders or only one, or if your monarchy should be absolute or constitutional. These decisions will move you along ideological axes like Liberty vs Authority and Tradition vs Progress. Just like the cultures, though, the bonuses for doing so seem like very small tweaks to resource generation most of the time. I didn't get the sense that being Collectivist vs Individualist greatly transformed my society or allowed me to roleplay in any very meaningful ways. And while your ideological distance from another empire is supposed to generate diplomatic tension, the sheepishness of the AI to declare war meant this never really affected me much at all.

I also can't go without mentioning some bugs and performance issues. Especially if I tabbed out of the game and back in, I would often have issues like the wagons and semi trucks travelling along my roads starting to flicker in and out of existence until I did a clean restart of the program. More rarely, audio would start to skip and become garbled. And worst of all, in one of my campaigns, I hit a point where ending the turn would simply hang forever and not allow me to continue. Amplitude is apparently aware of this last issue and told me they plan to fix it in the day one patch, but the workaround they provided me didn't prove useful and I had to abandon that run.