I built a lovely interdimensional train in this survival game, but flying sharks keep trying to eat it

Humanity peaked with the train. There is no form of transport more civilised, more elegant. Yes, even the last train out of town on a Saturday night. There's only one thing I'd change about them: I wish they'd stop attracting sharks.

Voidtrain is a survival game that dumps you on an infinite railway suspended in the clouds with nothing but a tiny trolley and big dreams. Big dreams about trains. Thankfully, floating all around you are the building blocks of a mighty metal steed, and loads of pesky fish.

The word "void" conjures up images of an endless, empty abyss, but the realm outside your train is actually a picturesque—if lonely—place. Massive islands and the ruins of ancient buildings float in the expanse, which is typically lit up in warm, inviting colours. It's more magical than menacing, and you can even jump off your ride and explore it. That's when you'll want to watch out for patrolling sharks.

If you spot scrap, wood or some other resource outside, you just need to take a leap of faith—made much safer because of the winch you're connected to, keeping you attached to your vehicle instead of drifting hopelessly. You don't even need to put on the brakes, and instead you can let yourself be dragged along as you snatch up any goodies you see bobbing around.

Should a flying shark strike while you're floating, you don't need to worry too much. These big fish are pretty cowardly, so all you need to do is put a bit of lead in them courtesy of a gun with infinite ammunition, and then they'll make a tactical retreat. But they'll be back. You'll see them circling, waiting to charge at your train or take a bite out of you while you're hunting for junk. Fill them with enough lead and they'll die, however, letting you get your hands on meat, leather and fat.

Predators aren't the only things that can be found in the clouds. Schools of friendly fish will fly around you, which can be harvested, and there's a sticky little fella who loves to attach itself to your wheels, slowing you down. There are surprises out there, too, like these massive whales that I encountered for the first time last night. When I clocked my first one, I thought it was just a bit of background scenery, but then it got closer and closer, taking up the whole screen, and before I knew it I had a giant sky whale hanging above me.

Mostly, though, it's just you and the horizon. Being literally on rails should make the gathering and exploration portion of this survival game dreadfully dull, but the novelty of rolling through this impossible, ethereal landscape, tethered to a moving train and grabbing what you can, hides the repetitive mundanity extremely well. And there's always something waiting to break up your routine. Maybe it's something spectacular like seeing your first whale. Or maybe you'll get your hands on a game-changing piece of kit.

Unlocking things like your wrist-mounted winch, grappling gun and throwable hoops really opens the game up. The winch and hoops allow you to travel deep into the void, where you'll find puzzling Witch Islands and, though I haven't seen any yet, derelict trains. The grappling gun, meanwhile, makes gathering resources easier by extending your reach. It's a genuine thrill to leap from rock to rock, skillfully looting floating treasures. Just remember to stop your train before you go for a wander.

It's a good thing all these gizmos are fun to use, because making them certainly isn't. Before you can craft an item, you need to research it first, which involves feeding the research table loads of resources and components. So you'll need to craft screws and gears and do all the work of crafting an item, just to unlock it. Do you get a finished item in the end, or at least those components back? Don't be ridiculous. No, if you actually want the item, you'll need to make more. 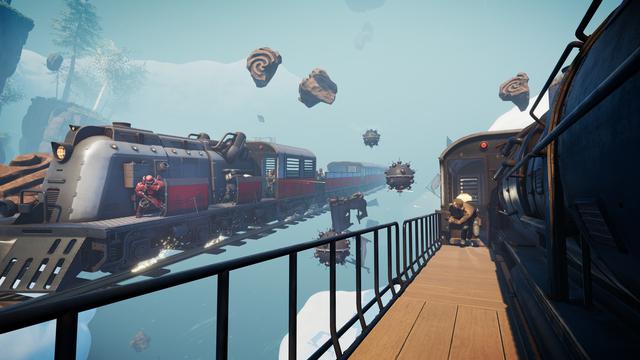 Valheim has spoiled me with its generous full dismantling refund, so it really bugs me that Voidtrain only offers a portion of the resources back. You'll be dismantling things a lot as your train grows, and it's a real chore. What I really want is the ability to move objects. There's no way a burly train engineer like me is too weak to lift up a box. The smelter might be a bit on the heavy side, though.

It can be a tad frustrating, then, but never stressful. The leisurely pace gives Voidtrain holiday vibes, and typical survival concerns like hunger and thirst rarely crop up. You will have to eat and drink eventually, but the meters go down so slowly you could be forgiven for thinking they don't exist. Food and ice can also be found everywhere, so even when you're in the red you shouldn't have any trouble avoiding death.

This pleasant pace makes the depots a bit jarring. See, each stretch of track is separated by a gargantuan, mystical gate, which hurls you towards a train depot. These are gloomy compounds with an aesthetic that screams "I love fascism". There's a barely touched on plot about being on the run from Nazi analogues or something, and you'll sometimes find troops waiting for you. The first time I was shot I was so surprised that I didn't even shoot back. I thought I was about to have my first chat with an NPC. When I finally remembered to fire my gun, I found the combat to be perfunctory and a bit clunky, but at least there's not much of it.

Depots are the only place you can upgrade your train with new carriages, engines and a few other things you can't craft on your own. There are also usually resources to loot, as well as out-of-place gambling machines that you can use once you've stolen some tokens from dead Nazis. They dole out things like scrap and hunks of meat. It's not exactly Vegas.

Though I might not be enamoured with the gunfights, I am intrigued by the promise of train battles. The only train I've seen is my own, but apparently there are enemies running on separate tracks, and a bit of train-on-train combat sounds like it could be a laugh. I should probably build some defences first.

I've only just finished crafting my first proper train engine, which is now my pride and joy, so it's still early days—but I'm very much looking forward to seeing what else Voidtrain has in store for me. I'm not often surprised by survival games these days, but this one feels a bit special. It's full of novelties and oddities, and it's the most fun I've had filling my inventory with junk in a long time. I need to talk more people into joining me, though. There's co-op for up to four players, but you can always jump into an open game with some randos if you can't find any pals.

Voidtrain is out now in early access via the Epic Games Store, and it's due to appear next year on Steam.

Fraser is the UK online editor and has actually met The Internet in person. With over a decade of experience, he's been around the block a few times, serving as a freelancer, news editor and prolific reviewer. Strategy games have been a 30-year-long obsession, from tiny RTSs to sprawling political sims, and he never turns down the chance to rave about Total War or Crusader Kings. He's also been known to set up shop in the latest MMO and likes to wind down with an endlessly deep, systemic RPG. These days, when he's not editing, he can usually be found writing features that are 1,000 words too long. He thinks labradoodles are the best dogs but doesn't get to write about them much.