“I have noticed the idol. But I do not remember any customer having mentioned it to us,” says Branch Manager ET Natrajan.

The building is owned by Hasan Mamooji and his brother Mohammed who belong to the Bohra Muslim community. “The Bharat Mata idol was there when we purchased the building from Ravji Devji (a business establishment) around 40 years ago,” says jeweller Shabbir, the son of 80-year-old Mohmamed. “My father told me we should not touch (remove) the idol though we are Muslims; it is important to people in whose faith such practice is there. We do not know much about the idol but we are told that it has been there for a very long time now.”

Hasan says that after purchasing the building from the grain merchant, they renovated it and installed a plaque renaming the building as Badri Manzil. “But we have not made any major changes to the front facade. It is like it used to be in olden days,” the 74-year-old adds.

Shabbir says the building is around 100 years old. It has been rented out to the bank.

Interestingly, this is not the only building in this port city that has a sculpture of Bharat Mata carved on its facade. The front facade of a grand haveli (mansion) in Chandi Bazaar of the city is replete with sculptures of birds, landmarks of Jamnagar city and human figures, in Oriental and European styles. Their vibrant colours stand out from the somewhat weather-beaten three-storeyed structure. But a full-size Bharat Mata sculpture at the centre-top of the facade stands out in the haveli which is entwined by narrow lanes.

“This haveli was constructed around 80 years ago by Popatlal Dharshi Sanghvi, a silver trader and the then nagarsheth (chief tradesman) of Jamnagar,” says Kirit Shah, trustee of Shri Visha Shrimali Tapgachchh Gyati Shwetamber Dharmashala, an organisation of Visha Shrimali Jain community which runs the inn now. “He then sold it one Amrutlal Doshi, who in turn sold it to Vallabhdas Gandhi. In 1970, we purchased it from Gandhi and converted into a dharmashala (inn) for our community. On 15th of August, we garland the sculpture and pay our respects.”

Gandhi’s 74-year-old daughter Heena Shah, who now lives in a house on the corner of the street and who was among the last private occupants of the mansion, says the sculpture of Bharat Mata has been there almost since the building was constructed in the late 1930s or 1940s. “My father, who was a businessman in the Middle East, purchased the haveli in 1955 and I distinctly remember the Bharat Mata sculpture was there at that time. The house was built at least 15 years before we purchased it,” she says.

A similar sculpture of Bharat Mata also adorns the parapet of a villa, christened Hemu Niketan, in Digvijay Plot area. The year 1948 has been engraved on its wall, suggesting the year it was constructed. “We did not build this house, we purchased it from someone else but maintained its facade as it was,” says a woman from the family who presently lives in it but did not want to be identified. Nearby Satyavijay Bhuvan, a two-storey bungalow, too has a Bharat Mata sculpture on its front facade.

In the same locality, Oswal KG and Primary School and Shri Visha Oswal Kanya Chhatralaya girls’ school also have sculptures of Bharat Mata in their buildings. Both institutes are run by Oshwal Sikshan and Rahant Sangh, an organisation of Jains. In fact, there is a dedicated Bharat Mata temple in Manekbai Sukhdham, the model crematorium on Nageshwar Road. The temple has an idol of Bharat Mata as well as sculptures of Buddha, Mahavir, Sahjananda, Guru Nanak, Kabir and Shankaracharya among others. Raliyatbai Ramji had got the temple built in 1944 in memory of her late husband Damodar Chhipa.

Leaders of the Jain community in Jamnagar say that people were swept by the Indian Freedom Struggle and extended their support to it by installing sculptures of Bharat Mata at the time. “To escape the poverty accompanying farming, hordes of Jains of the then Nawanagar princely state had emigrated to East Africa and tried their hand in business,” says 65-year-old Ramniklal Chandria, a trustee of OSRS. “Many were successful and helped us build the school and hostel to help educate children of fellow community members. All these buildings were built around the time of Independence and spirit of patriotism ran high those days. That spirit manifested in sculptures of Bharat Mata. The sculptures are is an expression of respect and salutation to the country, one’s motherland,” 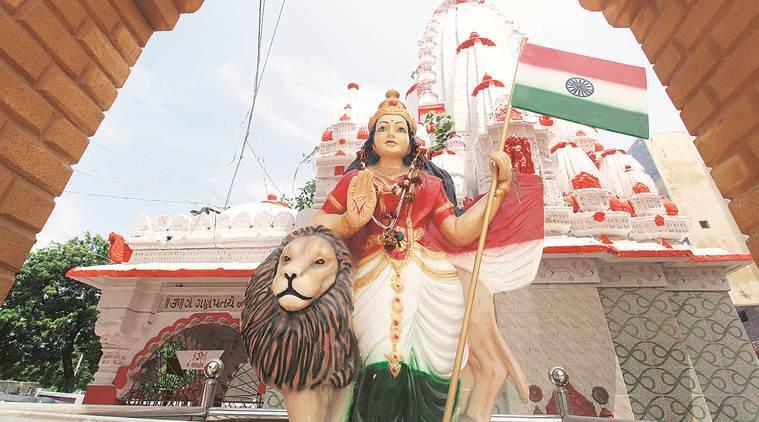 Chandria says that the Hindu nationalist organisation Rashtriya Swayamsevak Sangh (RSS) did have some influence among Jains settled in east Africa. “Our community in those days rallied behind freedom fighters like Manu Mehta and philanthropist Meghji Petha Shah and the Bharat Mata sculptures are symbols of their legacy,” he adds.

Harkishan Joshi, a city-based teacher-turned-advocate who has researched political, social and cultural history of Jamnagar and chronicled it in his book Nagar Navanagar Jamnagar, says forces of history combined to change the preference of people in having sculptures in buildings. “Jam Ranjisinh, the ruler of Nawanagar and the famous cricketer had a positive outlook on British rule in India. Therefore, the struggle for freedom was somewhat diminished in Jamnagar,” 79-year-old Joshi says. “But Jam Ranji died in 1933 and Digvijaysinji ascended the throne. He was a pro-Independence ruler and therefore the freedom struggle gained momentum. Freedom-fighters such as Gokaldas Thakkar, Lavanprasad Shah and others came to Jamnagar from Mumbai and rallied support for Independence. The spirit of patriotism started reflecting in houses of people in the form of sculptures of Bharat Mata. Earlier, sculptures of gods and goddesses used to rule the roost,” he says, adding that master masons like Dama Ganga, Raja Kavar and others had taken the art of construction to new heights.

Joshi adds that the spirit of patriotism ran very high among people of Jamnagar till late the 1950s.

Meanwhile, Shri Udasin Siddhababa Ashram, a religious complex of the Udasin sect in Nageshwar area of the city has been worshiping the Bharat Mata idol for the past 72 years. The Ashram has a marble Bharat Mata idol at the entrance of a hall used as a godown these days. “Our guru Siddhababa was a big patriot,” says Chetandas, the incumbent mahant (head) of the Ashram. “He used to help and support freedom fighters and when it became clear that we shall be a free nation, Siddhababa made an idol of clay and installed it two days before Independence Day. It was damaged six years ago, so we had another idol made from marble. The tradition of worshipping Bharat Mata was started by our gurus and it is imperative that we carry it forward.”

In May this year, another Bharat Mata statue was unveiled at the gate of Nageshwar area. The gate has been constructed by Lakshmandasji Udasin under the aegis of Sidhhababa Ashram. Chetandas says that he is not a member of Vishwa Hindu Parishad but adds that he supports the organisation. “I do not know if RSS or anyone else helped Lakshmandasji in installing the Bharat Mata idol at the gate,” says the mahant. However, a senior BJP leader of Jamnagar says he had attended the unveiling of the idol at Nageshwar gate.

While the idols in Nageshwar are placed beside idols of goddesses, not many people seem to know about it. “I have come for darshan of goddess Shitala. I do not know if there are idols of Bharat Mata as well in this area,” says Yogesh Bhadra (30), a resident of Digvijay Plot area of Jamnagar.

Bhavna Devipujak, a resident of Bedi who was selling toys and other items near the gate said she did not know which goddess the idol represented. But Chirag Parmar (25), an air-conditioner technician, was excited after Harendra Gusai, owner of a jewellery shop opposite the haveli-converted-into-dharmashala pointed out to him that there was a sculpture of Bharatmata at the top. “This looks so amazing, the art and overall architecture. I have been visiting this place for many years but never knew of the sculptures there,” he says.