Hundreds of Pakistanis took to the streets in Islamabad, Karachi and Lahore on Monday to protest Israel's continued attacks on Gaza, demanding that the Pakistani government as well as world powers intervene to stop the deadly violence that has now claimed more than 200 — overwhelmingly Palestinian — lives.

In Lahore, the Progressive Students' Collective (PSC) and Lahore University of Management Sciences (Lums) students staged a protest at Liberty Chowk in solidarity with the Palestinians and against the Israeli government.

The protest was joined by at least 800 students and local activists.

Protesters hold placards as they take part in a demonstration in support of Palestine during an anti-Israel protest rally in Lahore on Monday. — AFP

Protesters hold placards as they take part in a demonstration in support of Palestine in Lahore. — AFP

In their speeches, the organisers strongly condemned Israel's atrocities against Palestinians and said that the West, especially the United States, had "sponsored Israeli settler colonialism".

PSC leaders said the unification of progressive forces on a global scale could help them fight Israeli "fascism" and support the Palestinians.

During the protest, powerful slogans in favour of Palestine's liberation were continuously raised.

People take part in a rally in support of Palestinians organised by civil society organisations, in Islamabad on Monday. — AP

Protesters carry placards and chant slogans as they take part in a demonstration in support of Palestine during an anti-Israel protest rally in Islamabad. — AFP

Protesters at an anti-Israel rally in Islamabad. — AFP 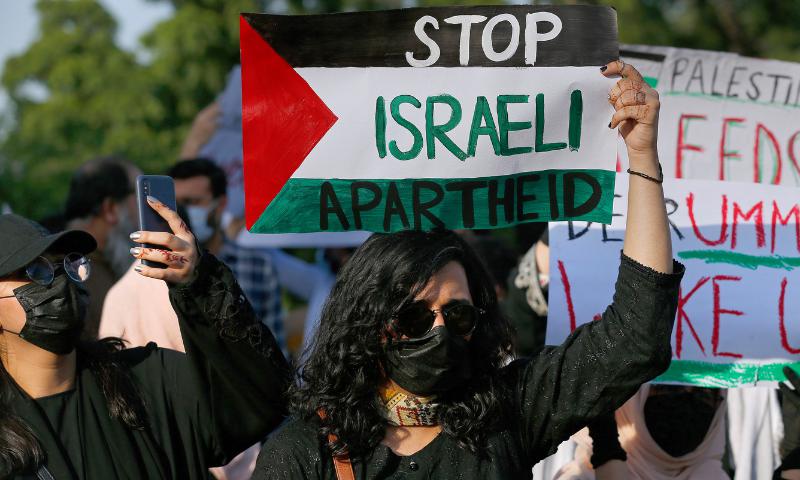 A protester told Dawn.com that supporting the Palestinians was not a "religious matter" and "anyone who is human should come forward and protest the attacks."

In Karachi, a protest was held outside the Karachi Press Club (KPC) against Israel's "state terrorism".

KPC Secretary Mohammad Rizwan Bhatti paid tribute to Palestinian fighters who he said were standing firm in the face of Israeli aggression and condemned the "silence" of the United Nations, Organisation of Islamic Cooperation (OIC) and international human rights organisations.

Journalists shout slogans as they take part in a demonstration in support of Palestine in Karachi. — AFP

Protesters hold placards as they take part in a demonstration in support of Palestine in Karachi. — AFP

A day earlier, Pakistan strongly condemned Israel's systematic assault against Palestinian worshippers in the Al-Aqsa mosque compound and its continued policy of expansion of its illegal settlements.

In a rejoinder to the UN Security Council, Pakistan appreciated the council's decision to hold a meeting to discuss the extremely grave situation in the occupied Palestinian territories and Jerusalem, saying: "It is regrettable that the Council has been unable to even hold this meeting and to take action to halt Israeli aggression for so long.

"We also strongly condemn: Israel's deliberate and systematic assault against Palestinian worshippers in the Haram-al-Sharif, including the Al-Aqsa mosque, during the holy month of Ramazan; its violation of the sanctity of these holy sites," the statement said.