Inbox: The years pass but the legacy endures 2020 in photos: Best of Davante Adams Happy birthday to Oren Burks!

Hi Wes, outside of trading down and getting an extra first-rounder in his first draft as GM, has Gutekunst ever traded down in any draft? It seems like he's always been prone to stay at the pick or trade up but rarely if ever trade down. And do you believe it is more likely that GB will end up making less than 10 picks in the upcoming draft due to moving up or is there so much uncertainty due to the lack of a combine, shortened college season and player opt outs that he actually trades down?

Not yet. Other than the first-round dealings, Gutekunst has drafted where the Packers were picking on the second and third day. My outside-the-box prediction, however, is the Packers will make more than their slotted 10 picks this year. You can take that to Spoff's bank!

With Corey Linsley not returning, how do you see the Packers potentially lining up their line next season?

If I was tasked with forming an offensive line out of the Packers' current roster, it's probably David Bakhtiari, Jon Runyan﻿, Elgton Jenkins﻿, Lucas Patrick and Billy Turner (left to right). But the real question becomes what Green Bay does if Bakhtiari isn't cleared for Week 1. In that case, then the Packers probably need to slide Turner or Jenkins into that spot. Bakhtiari came in and starred right away at left tackle in 2013 but that's a tall order for an incoming rookie.

The "debate" between Jordy Nelson and Randall Cobb having better careers comes down to this: who won a Super Bowl? Cobb was a year too late.

Why did I start this fire?

Wes, I'd take Randall Cobb if a play breaks down and Jordy Nelson if it didn't. The question is, is Davante Adams on the verge of being better in those situations than both?

Possibly. Adams can run the entire route tree from anywhere on the field and is still 28. If the Packers extend him – and I have no reason to see why they wouldn't – Adams could wind up owning most of the franchise's receiving records. He's already fourth in career catches and receiving touchdowns. 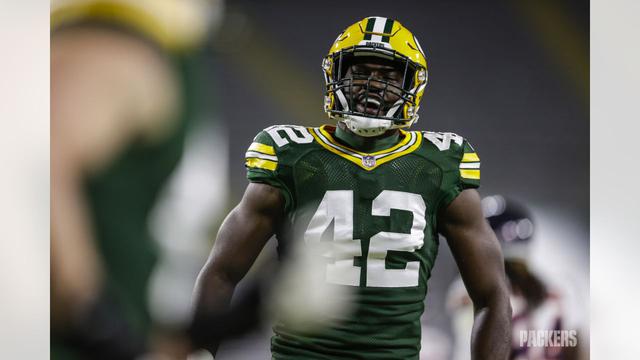 Things aren't that bad, especially after the creation of the rookie-wage scale in the 2011 collective bargaining agreement. History has shown there is a significantly better chance of hitting on a Pro Bowl/All-Pro player in the first round than the second, so I always stick with those odds if there's a player with a first-round grade still on the board.

Casey Hayward and Kevin King were both good when healthy but injured often while playing on their rookie contracts. Are people asking about bringing Hayward back more frequently? I'd rather have the 25-year-old cornerback than the 32-year-old one if both their markets were soft enough for the Packers to make a push.

Don't think that irony is lost on me. Six years ago, many fans were saying the same things about Hayward that they're currently saying about King.

I saw one of the mock drafts has the Packers picking Micah Parsons with their pick at 29. They say he falls that far down because of character issues. I have not heard anything negative about Parsons. Do you think the Packers would take him if he was there at 29? Also, I was sorry to see Tim Boyle go. I know I only saw him play mainly in the pre-season, but he looked like he had promise.

I saw that and also read LaVar Arrington's impassioned rebuttal. I'll leave it up to you to decide, but if we're talking strictly about Parsons as a football player, I love what I've seen on film. He blurs the lines between outside and inside linebacker, which is in vogue right now. Parsons has a big frame (6-3, 245) but still very explosive for the position. If he can diagnose and play to that speed at the next level, Parsons could be a real player in this league. Now, would the Packers use a first-round pick on a guy who projects as an inside linebacker in this defense? Until I see it, I'm bearish about leading everyone down that path - especially with Krys Barnes and Kamal Martin on the roster.

How important is it to have a solid third quarterback in camps for the young guys on both sides of the ball to develop with quality competition? Also, is there an equivalent to having a pitch count on No. 12 in the offseason program to minimize the amount of throws he puts on the arm? Go Pack Go!

It's big. Tim Boyle was throwing to Allen Lazard﻿, Robert Tonyan and Marquez Valdes-Scantling well before they got to run with the first team. It's going to be important for the Packers to identify a viable No. 3, through either the draft or college free agency.