King of Seas guide: How to conquer ports and settlements

At the start of your adventure in King of Seas, Eagle’s Den is the only friendly settlement held by the Pirate faction. Later on, though, you’ll receive a quest to defeat Captain Henry. Soon, you’ll be able to conquer harbors or port settlements in King of Seas. Here’s our guide with more details.

Note: For more information, check out our King of Seas guides and features hub.

King of Seas guide: How to conquer harbors or port settlements

After beating Captain Henry, you’ll have to reach level 35. Once you’ve done that, capturing a harbor/port settlement in King of Seas is fairly straightforward.

All you need to do is destroy the nearby fort (a building with several cannons that’s near a settlement). After blowing it up, the town/harbor will be yours.

Ideally, you’ll want to blast the fort with your broadsides, sailing back and forth until its defenses have been nullified. Still, there are some decent ship skills that you can equip if you wish to make the bouts easier:

Ethereal Navigation to get out of dodge quickly or Seagull Army to nullify damage.

Pirate Party for AoE damage since Merchant ships will be in the area. There are also Royal Navy ships that will arrive once the fort is below 50% HP. Haunted Ship (galleon) and Magic Whirlpool (frigate) are also decent options. 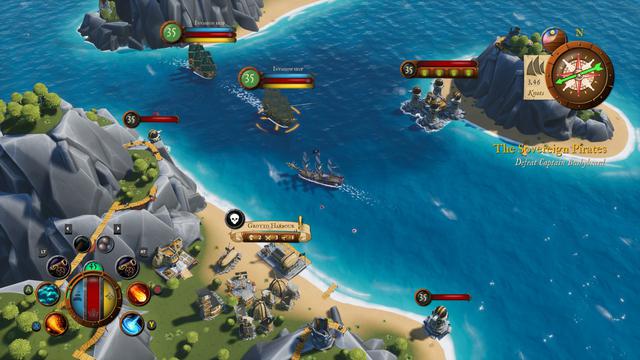 Lastly, Dead Men Tell No Tales (frigate) fires a barrage of cannons from both sides of your vessel.

After securing three new settlements as part of King of Seas‘ main quest, you’ll be able to upgrade the facilities in Eagle’s Den and other Pirate-owned territories:

Military Force – Boosts the health and defenses of the fort and other cannons.

Wealth – Increases the gold that’s passively acquired by the town over time.

Note: Although the quest in King of Seas requires you to conquer three ports for the Pirate faction, you can continue expanding your territory to your heart’s content.

Do keep in mind that the following settlements can’t be conquered as part of the sandbox: Eagle’s Den (Pirates), King’s Fortress (Royal Navy), and Tortuga (Merchants). Everything else is fair game, which means the Royal Navy and Merchants will try to retake the other towns that you’ve already grabbed for the Pirates.

You’ll be warned if there’s an invasion force that’s on its way to your territories (the fleets are marked on your map). You can ignore them if you wish, but you could lose your newly acquired harbors if you’re not careful. Likewise, taking out these invasion fleets nets you rewards.

King of Seas is available via Steam. For more information, check out our guides and features hub.