Pardon the pun but Chad Kreuter knows the score.

A resume that reads 16 years of MLB play, coaching the USC Trojans baseball program, and now in his fourth season in the New York Mets minor league system managing/coaching, and instructing to those in waiting for the call to the major leagues, theres little Kreuter will encounter that will throw his game off-kilter.

Despite his club waking up this morning in central Massachusetts 21.5 games behind Triple-A East Northeast Division leader Buffalo Bisions, theres nothing that would indicate panic in any way. Quite the opposite can be said about hall of fame flamethrower Nolan Ryans former "personal" catcher.

Theres an abundance of confidence in Kreuters voice. His apparent been-there-done-that mantra suggests, despite the win-loss record for Syracuse, measured progress in player development is on the rise.

Baseball seasons ,dating as far back as record books suggest, are a string of highs and lows.

Just yesterday over at Polar Park in Worcester (MA), where the Mets have been camped out since this past Monday playing the Boston Red Soxs top affiliate (Worcester is 40 miles west of Sox Nations hub and 50 miles east of Springfield), Kreuters crew swept the WooSox in a doubleheader. With Syracuse racking up more than 50 player transactions so far this season, keeping track of whos in Syracuses dugout, just short of his players wearing "Hello, My Name Is" stickers on their jerseys, Kreuter has had little experience maintaining a regular line-up.

Welcome to professional baseball, just a single notch below the big leagues.

Sending players prepared for MLB play is what Kreuter is paid to do. He is earning his money this season in Syracuse. To some, a teams win-loss record usually reflects the continuity or lack thereof of the unit as a whole. For Kreuter, being around the game as long as he has, understands how to adapt his teachings.

"Weve (New York Mets) lost a lot of guys that came through me in St. Lucie ( Mets Low-A Southeast affiliate in Florida), such as in the Stroman trade," said Kreuter during a recent telephone conversation from his NBT Bank Stadium office. " We New York Mets) find ourselves here in 2021 thin in players, and its tough. When I send players up to the big leagues, they are performing well, but at the same time we suffer here."

Courtesy of the Syracuse Mets / Photo by Rick Nelson

Going for three straight victories today in Worcester with first pitch at 4:05 p.m., Kreuter will gladly accept what would be win 33 on the season.

"We (Syracuse) wish we had more victories, but that will come as we create depth in the organization."

Winning comes, regardless of what level players are assigned, through preparation. Commitment to developing himself into a solid major leaguer came immediately for Kreuter. During his first full-season with the Texas Rangers, as a 25-year-old rookie catcher, future hall of fame pitcher Nolan Ryan taught Kreuter what preparation is all about.

"Basically, I was his caddy. I caught him, I think, 34 starts that season," recalls Kreuter of the Rangers 1989 season.

Kreuter details being in the shadows of baseball royalty, and learning what is required to reach a level of play few in the game ever does. When on road trips, according to Kreuter, at the side of Ryan, the routine began almost immediately following wheels down of the Rangers charter flight.

"We would get a taxi, and off wed go to a gym. After the weight room, wed have lunch, then to the ballpark, where Nolan went through his throwing routine," Kreuter explains.

But, once at the ballpark of the visiting team, and after visiting a place to train such as when the Rangers were in New Yok the duo could be found at the Downtown Athletic Club located in Lower Manhattan, preparation for the game continued. Kreuter recalls he and Ryan going over who would be in the opposing teams line-up, and how they would attack their weaknesses.

All this, before the National Anthem would be sung.

Tapping into the commitment Ryan, and others have displayed to Kreuter through to the 2003 season, his last as an active player, is what the Syracuse bench boss draws from. No roster is created equal in baseball, and dozens of individual personalities need addressing. Kreuter sees a distinct difference is piloting players on his Triple-A roster, and those who he was in charge of at the Single-A level.

"When I was at St. Lucie, I could tell the players to jump, and they would say how high? At a lower level than Triple-A, as a manager, you get to set the teams tone; set the script. Up here (Syracuse), so many guys are coming from outside the organization, and may be used to doing things how another organization works".

Given how the Triple-A schedule is constructed, and given constraints put in place due to COVID, with Syracuse playing opposite the same five clubs in their division, according to their manager, has been beneficial, from a player development aspect this season.

"There have been no flights," Kreuter tells of his club needing to catch. " The six-game schedule has stabilized a lot."

Recording progress playing opposite Buffalo, Rochester, Lehigh Valley, Scranton/Wilkes-Barre, and Worcester, Kreuter tells of his club needing some time to reach a "normal" pattern on the field.

Last season, when baseballs minor leagues were in hiatus due to the pandemic, Kreuter was stationed at New Yorks alternate site for training during the MLB season, in Brooklyn.

Courtesy of the Syracuse Mets / Photo by Rick Nelson

"There wasnt much player movement on the Mets level, so my job was to keep guys ready. This year we are playing an actual schedule. At first, it was hard to develop continuity." Kreuter remembers. 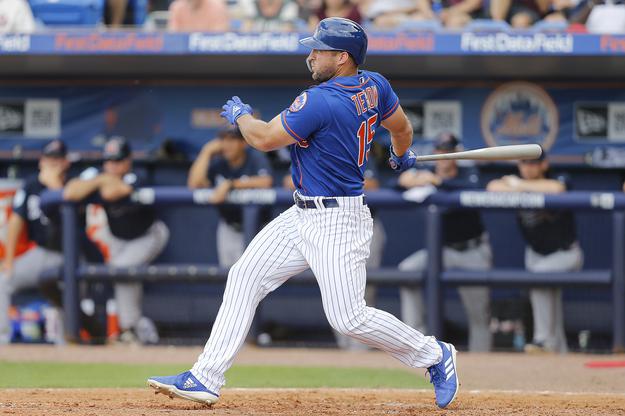 As Kreuter sees his club this season, it took beyond spring training for all to jell as one. He is quick to point out that less than two hours before Syracuses opening game this season, two players he was counting on to lead in the line up were recalled to New York. The player transactions, although can be expected, nevertheless they remain challenging. But, Kreuter feels all is back in their groove.

Kreuter knows a thing or two about handling highs and lows of players on a nightly basis. During his 1989 season in Texas, it was Kreuter who was squatting behind home plate on August 22 at Arlington Stadium, with Ryan on the mound, and Oakland As Rickey Henderson up at bat. When the future hall of famer Henderson whiffed for a called third strike, Ryan registered his 5,000th career strikeout. Kreuter popped up, and immediately headed for the mound, to give the ball to his mentor.

"That was special. It was an extremely fun learning curve at the time," Kreuter says. " At the time, I may not have realized how huge. It was a privilege catching Nolan."

Regardless of a players draft pedigree (Kreuter was a 5th round pick by Texas in 1985), or by another means acquired, getting them ready for when needed 265 miles south in Queens (NY) is what Kreuter is charged to do. A Sunday matinee with Worcester still to go, then its back to Syracuse for a 12-game homestand with the visiting Rochester and Buffalo.

Baseball continuity, in training , is at work in Syracuses Northside, one game at a time. Mets manager Chad Kreuter is tweaking everyones tendencies for one common goal - grow to be a major leaguer, and maybe pick up a future hall of famer as a buddy along the way.

Don Laible is a freelance sportswriter living in the Mohawk Valley. He has reported on professional baseball and hockey for print, radio, and on the web since the 1980s. His columns are featured weekly at WIBX950.com. Don can be contacted via email at Don@icechipsdiamonddust.com.

50 Most Popular Chain Restaurants in America

YouGov investigated the most popular dining brands in the country, and Stacker compiled the list to give readers context on the findings. Read on to look through America's vast and divergent variety of restaurants—maybe you'll even find a favorite or two.

LOOK: What major laws were passed the year you were born?

Data for this list was acquired from trusted online sources and news outlets. Read on to discover what major law was passed the year you were born and learn its name, the vote count (where relevant), and its impact and significance.

LOOK: Here is the richest town in each state

Just saying the names of these towns immediately conjures up images of grand mansions, luxury cars, and ritzy restaurants. Read on to see which town in your home state took the title of the richest location and which place had the highest median income in the country. Who knows—your hometown might even be on this list.

LOOK: Here Are 30 Foods That Are Poisonous to Dogs

To prepare yourself for a potential incident, always keep your vet's phone number handy, along with an after-hours clinic you can call in an emergency. The ASPCA Animal Poison Control Center also has a hotline you can call at (888) 426-4435 for advice.

Even with all of these resources, however, the best cure for food poisoning is preventing it in the first place. To give you an idea of what human foods can be dangerous, Stacker has put together a slideshow of 30 common foods to avoid. Take a look to see if there are any that surprise you.

LOOK: Here are the 50 best beach towns in America

Every beach town has its share of pluses and minuses, which got us thinking about what makes a beach town the best one to live in. To find out, Stacker consulted data from WalletHub, released June 17, 2020, that compares U.S. beach towns. Ratings are based on six categories: affordability, weather, safety, economy, education and health, and quality of life. The cities ranged in population from 10,000 to 150,000, but they had to have at least one local beach listed on TripAdvisor. Read the full methodology here. From those rankings, we selected the top 50. Readers who live in California and Florida will be unsurprised to learn that many of towns featured here are in one of those two states.

Keep reading to see if your favorite beach town made the cut.

LOOK: The most famous actress born the same year as you

Many of the actresses in this story not only made a name for themselves through their collection of iconic performances, but also through the selfless, philanthropic nature with which many of them approached their stardom. In an age of flipping the script on societal norms, many of these actresses are using their voices and platforms to be advocates for those who are otherwise unheard.

LOOK: The Most Famous Actor Born Every Year

LOOK: 30 fascinating facts about sleep in the animal kingdom

KEEP READING: Here are the most popular baby names in every state

Using March 2019 data from the Social Security Administration, Stacker compiled a list of the most popular names in each of the 50 states and Washington D.C., according to their 2018 SSA rankings. The top five boy names and top five girl names are listed for each state, as well as the number of babies born in 2018 with that name. Historically common names like Michael only made the top five in three states, while the less common name Harper ranks in the top five for 22 states.

Curious what names are trending in your home state? Keep reading to see if your name made the top five -- or to find inspiration for naming your baby.

To determine the most popular biblical baby names, Stacker consulted the name origin site Behind the Name and the Social Security Administration's baby names database then ranked the top 50 names from Behind the Name's Biblical Names origins list of 564 names, based on how many babies had been given these names in 2019. Click through to find out which biblical names have stood the test of time.