American Olympian Molly Huddle crossed the Boylston Street finish line of the BAA Boston Marathon in the middle of the jolly pack yesterday.

Huddle hopes to reenact that experience solo when she joins the strongest American women’s field ever assembled in this century for the 122nd Boston Marathon on Patriots Day, April 16.

Huddle was joined in the promotional rush-hour run by BAA veterans and fellow Olympians Shalane Flanagan of Marblehead and Desi Linden, and about 100 employees at John Hancock, the principal sponsor of Boston.

Huddle is a three-time winner of the BAA 5K event, and the Providence resident will be competing in her second major marathon and first trip from Hopkinton to Copley Square.

“I really want to be a part of this race, and I know it’s a challenge because everybody has warned me how hard the course it,” Huddle said during a gathering inside the Fairmont Copley Hotel. “At this point, I’m just excited, and when the field is this good, I feel we will be part of a really exciting day. Everybody wants to see who is going to come out on top, and that is exciting to be a part of.” 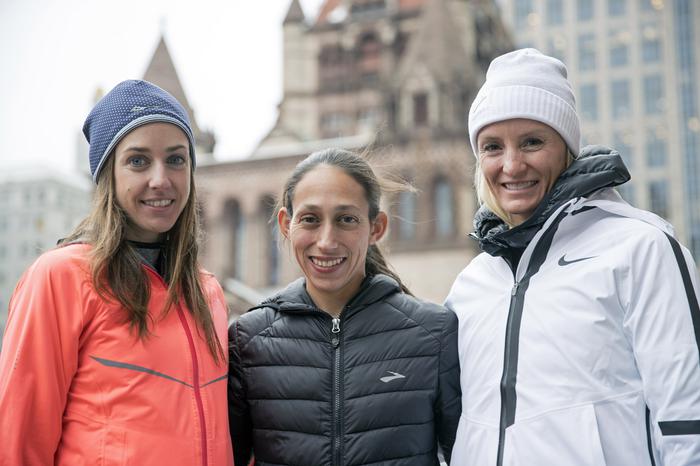 Flanagan attracted international attention to American distance running with a decisive and historic victory in the New York City Marathon on Nov. 5. She became the first American woman to win New York since 1977, running the five boroughs in 2:26.53, considerably faster than her second-place finish there in 2013 (2:28.40).

Flanagan’s road running career was revived by her sixth-place at the 2016 Olympic Games in Rio de Janeiro and her win at New York. Winning Boston is at the top of her career bucket list, and she will be making her fourth attempt. Flanagan’s previous best was fourth (2:27:08) in her 2013 Boston debut.

Flanagan was the center of attention at the gathering, and she graciously honored every photo request, noting she has grown comfortable being a celebrity athlete.

“I’m a celebrity in the running world, but since New York, it has been amazing,” she said. “Certain marathons have huge platforms, and New York City certainly has a worldwide reach, and I didn’t understand the magnitude of it.”

While Flanagan enjoys favorite daughter status in Boston, the most successful American in the BAA race during the past three decades is Linden. A two-time Olympian, Linden has run Boston four times and finished in the top 10 in all of them. She placed runner-up by two seconds to Kenyan Caroline Kilel in 2011, a race considered by many the most exciting in BAA women’s history. She placed fourth last year after pushing the pace for 18 miles.

“I’m going to keep coming back as long as they keep bringing me back,” Linden said. “It is the place to run in the spring and obviously the Americans are very excited.”