What happens when the corporation anybody seems to love to hate, namely Microsoft, release a killer app and of makes it free (as in dollars), but, of course, keeps its source jealously closed? And worse than that, use it to maintain a strong lock-in to the Windows platform?

Microsoft’s MSN Messenger is a bulky, overbloated messenging application. Its new beta (version 7) makes things even worse: it now allows you to ‘nudge’ the IM window of your correspondent (it shakes his/her IM window for a period of one or two seconds). Other new features allow users to send and receive annoying-as-Hell full screen Flash sequences, an easy white board integration, background bitmap sharing and of course, a good lot of merchandized artwork (the usual obnoxious emoticon pack plus new contents for every feature I just described). It has even its own blogging and photo sharing system. Young people

Of course, the older MSN 6 features are still there. A big 96×96 pixel display picture (MSN variation of the avatar or buddy icon), very good webcam support (plug & play that really works), attractively themed windows. Other features include magical file transfers (magical in the sense that thanks to uPNP, file transfer actually

, even if you’re heavily firewalled/NAT’ed), a game system (from a basic and free tic tac toe to more evolved, for-money games) that works far from flawlessly and pretty bad audio support, far behind the current leader’s (Skype) abilities.

Young people in European countries just can’t live without MSN. Here, anyone in his teens or twenty-something has its MSN Messenger account (we usually call it MSN for short here, since nobody even knows that MSN is an ISP in the USA). Just give me your MSN and we’ll talk about it tonight’ is a sentence you’ll hear pretty everywhere, from elementary school to universities. Non-‘MSN’-users are being more marginalized everyday. Just as people (like me) who don’t want a cell phone are. 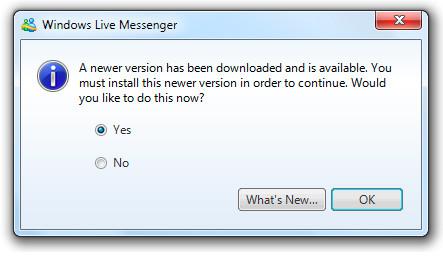 What does it have to do with Free and Open Source Software, you may ask? Well, the idea behind this rant is simple, if not simplistic. You’ll often read in this column, on Slashdot and on various other sites that ‘heavy’ software (more often cited examples are Microsoft Office, Adobe Photoshop & Illustrator or the Macromedia suite) keep people from using Free operating systems (i.e. any Linux or BSD flavor running KDE or GNOME). That’s true, but that’s far from being the complete story.

Can you connect to the MSN Messenger network using Free operating systems? Sure you can. There is Gaim, there is Kopete. Are they attractive? No, they aren’t. Their interfaces are terrible. Moreover, all you can do with them is write basic IMs. Bye bye overbloated and stupid nudge and Flash sequences. Just the text ma’am. Display picture? Well, it sort of works, but that’s all. File transfers? I can swear that you’re a lucky guy (girl) when it works. Usually it doesn’t, resulting in embarrassing ‘Sorry mate, I’m using Linux, you know and, well, could you mail me this picture instead?’.

And boy are they ugly. Compare a MSN Messenger 7 chat window and a Gaim window. Gaim (or Kopete for that matter) is so austere that the comparison looks unfair even to people who, like me, usually hate themed windows and flashy-for-the- sake-of-being-flashy interfaces.

Will it keep me from using other OSes than Windows? Certainly not. Will it keep young people from using them? You bet. And that’s the point of this long rant. Office and creative applications, are undoubtely important tools for keeping Windows’ (and to a lesser extent, Mac OS X’s) lock-in on the Desktop. But I can’t understand why every Free and Open Source advocate basically snobs IM’s. Gaim and Kopete are just not good enough. I mean that their target public (i.e. young people) just won’t care to use it (I understand that some people, me included, can live with them. We just aren’t the target public).

We have OpenOffice.org, we have FireFox. Both are doing well in their respective domains. Why do we keep thinking that Gaim’s so ‘1999-2000’ tools are good enough? They aren’t and it’s my opinion — and I’d really like it to be false — that it’s a major problem to address in the next few months in order to increase the admission of Free and Open Source software on the desktop. A problem that has to be addressed very, very quickly, before it becomes even worse.

If you would like to see your thoughts or experiences with technology published, please consider writing an article for OSNews.