Mummy of Pharaoh's Official Discovered Inside Limestone Sarcophagus in Egypt

Remains of a chapel found by Khuwy's tomb had been heavily robbed by ancient stone robbers. Hieroglyphs found in the tomb indicate that Khuwy was a senior administrator who held a high rank in the court of pharaoh Djedkare Isesi.

The mummified remains of a high-ranking official named Khuwy were discovered in a colorful tomb that dates back 4,400 years. Archaeologists made the discovery in south Saqqara, in Egypt, the Egyptian Ministry of Antiquities announced April 2.

Next to the burial is a pyramid complex built for the pharaoh Djedkare Isesi, who reigned from 2381 to 2353 B.C. The colors of the tomb's hieroglyphs and decorations are incredibly well-preserved, despite the passage of over 4 millennia.

Hieroglyphs in the tomb list offerings and Khuwy's many titles, including "overseer of the khentiu-she of the Great House," "Great one of the ten of Upper Egypt" and "Sole friend" — titles that indicate he was a senior administrator in the pharaoh's court, said Emilie Martinet, a postdoctoral fellow in Egyptology with the Université Paul Valéry — Montpellier. While Martinet is not part of the team that made the discovery, her research focuses on the workings of ancient Egyptian administrations. [Photos: The Amazing Mummies of Peru and Egypt]

Within the tomb complex, a descending corridor leads to a vestibule (an entrance area shaped like a hallway); an entranceway on the vestibule's southern wall leads to an antechamber with a drawing that shows Khuwy sitting in front of an offering table. Two entrances on the west wall of the antechamber lead to the burial chamber.

A team of archaeologists have discovered a tomb belonging to an official named Khuwy who lived about 4,400 years ago. Hieroglyphs in this photo say that he is the "Overseer of the khentiu-she of the Great House."

Inside that burial chamber, the archaeologists found the remains of a limestone sarcophagus that was robbed and almost destroyed in ancient times. The remains of the mummy of Khuwy was found in the same room. [Photos: Ancient Egyptian General's Tomb Discovered in Saqqara]

The design of the tomb complex is similar to chambers built underneath pyramids during Egypt's fifth dynasty period (2465 to 2323 B.C.), according to the statement.

The team, led by Mohamed Megahed, an archaeologist with the Egyptian Ministry of Antiquities, also investigated a pyramid located beside that of Djedkare Isesi, finding that it belonged to a queen named Setibhor. An inscription found on a column within the pyramid reads: 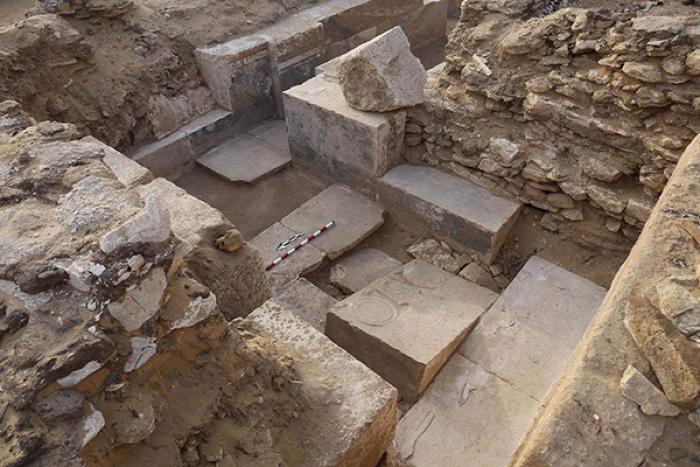 In addition to discovering the tomb of Khuwy, the archaeological team investigated a pyramid beside pharaoh Djedkare Isesi's. An inscription they found said that it belongs to Queen Setibhor.

"The one who sees Horus and Seth, the great one of the hetes sceptre, the great of praise, king's wife, his beloved Setibhor."

While archaeologists had known about the existence of that pyramid, until now, they hadn't realized it had been built for the queen, the statement said.

"The large size of the pyramid complex of queen Setibhor and her title of [king's] wife indicate perhaps her direct intervention in helping her husband, king Djedkare [Isesi], ascend the throne of Egypt," according to a statement from the Czech Institute of Egyptology.

The team also conducted restoration work on the pyramid of pharaoh Djedkare Isesi.

The 25 Most Mysterious Archaeological Finds on Earth

Owen Jarus writes about archaeology and all things about humans' past for Live Science. Owen has a bachelor of arts degree from the University of Toronto and a journalism degree from Ryerson University. He enjoys reading about new research and is always looking for a new historical tale.