Nicolas Batum returns to Clippers; Kawhi Leonard could be next

With teams pursuing him as a free agent last year and a decision about his destination needed, Nicolas Batum considered the disappointing season he had just exited. In the Clippers, only months removed from their bitter 2020 postseason exit, he saw his match.

“We had the common story from last year,” Batum said in March. “... I was like, why not go with that team and make sure we both redeem ourselves?”

On Monday, that story added another chapter.

Only hours after free agency opened across the NBA, the 32-year-old, 6-foot-8 forward agreed to return to the Clippers on a two-year contract with a player option for the second season, a person with knowledge of the deal confirmed. Critically for the Clippers, whose payroll allows them few financial maneuvers to add talent in free agency, Batum agreed to take less money than he could have — a first-year salary projected to be around $3.2 million, instead of the team’s taxpayer mid-level exception worth $5.9 million.

Preserving that mid-level exception could prove significant for the Clippers and an attractive carrot to free agents who otherwise might not have considered a minimum-salary offer from the team.

Batum’s decision also is a signal of just how much he wanted to return to L.A., where he revived his career coming off of a 2019-20 season in Charlotte in which he averaged career-low shooting numbers.

After the Hornets waived Batum — and agreed to pay the remaining $27 million of his contract over the following three seasons, something that also could have factored into his decision Monday to take less money — he authored a personal comeback not everyone saw coming. 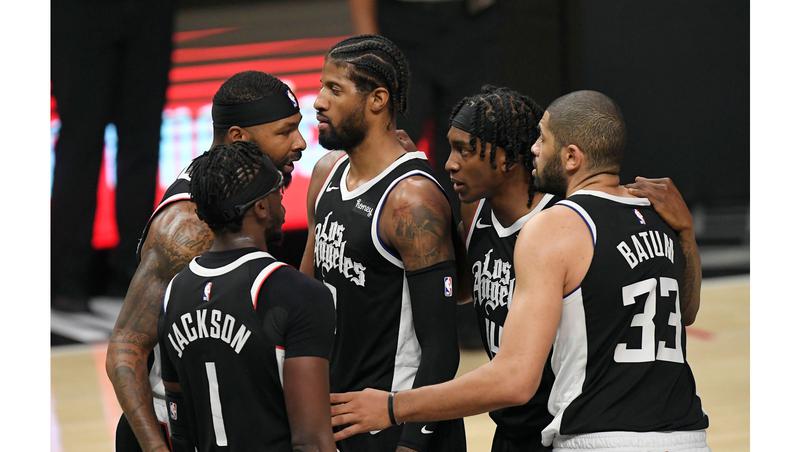 Batum averaged 8.1 points and 4.7 rebounds while shooting 57% inside the arc — 14 percentage points higher than the previous season — and 40% on three-pointers. His addition to the starting lineup during the fourth game of a first-round playoff series against Dallas helped tilt the series in the Clippers’ favor, and his positional versatility was used widely by coach Tyronn Lue to help pull off numerous playoff adjustments.

Batum’s veteran professionalism was just as valuable to a team needing to reset its chemistry, as he accepted whatever role was needed.

Team President Lawrence Frank said last week that the organization’s top priority in free agency was re-signing its own free agents, and with center Serge Ibaka exercising his option for next season, Batum’s choice brings the Clippers halfway toward their goal.

Superstar Kawhi Leonard and point guard and playoff catalyst Reggie Jackson remain unsigned. The expectation remains that Leonard will return and rehab his surgically repaired right knee next season. One such indication, according to a report from The Athletic, was that Leonard had attended some of the team’s recent draft workouts. Another potential clue is that Clippers assistant Jeremy Castleberry, one of Leonard’s close friends, is scheduled to coach the team’s summer league squad in Las Vegas beginning later this week, according to two additional people.

Despite Leonard’s injury, he’s still expected to earn maximum money. One possibility is a two-year deal with a player option for next season, because it would make him eligible to lock in the most money in the long term. He would earn $39 million next season, before opting out next summer and signing a five-year maximum contract extension worth around $235 million.

The longest available contract he could sign now would be for four years and $176 million.

The Clippers were in contact with Jackson’s representatives throughout Monday; the minimum they can offer him is two years, starting at just more than $10 million, but Jackson, who is 31, could be seeking more long-term security. Meanwhile, New Orleans, viewed as a likely contender to make him a significant offer, looked elsewhere to fill its hole in the backcourt.