Odd Job: How one man makes a living making the Sims kill each other

Armageddon, Ahmed Qoqas’ latest mod, warps the docile suburbia of SimNation into an epic struggle of superheroes and supervillains. A Sim’s eyes glows blue and it calls lightning from the sky. It is Avengers: Endgame, in Macintosh form.

The Sims is one of the most popular video game franchises of all time. You take control of a small family in a modest house and enjoy the thrills of ordinary life. Unlike other games, there isn’t a clear victory condition or story to follow. You will not shoot aliens, or level up abilities, or kill the warlord who set you on a quest for vengeance. Instead, you feed your dog, throw barbecues with your neighbors, and maybe get married to the cute girl or guy across the hall.

All of that low-stakes freedom has made The Sims ripe for modding. For the uninitiated, a mod is essentially a homebrew addition to an existing video game. Enterprising designers dive into the source code of something like Doom or Half-Life or The Sims, create their own variant of that game and upload it to Steam or Mod DB. Throughout the ’90s and 2000s, mods were almost always free. They’re still free today, but with the advent of services like Patreon, modders are finally able to inject themselves into the marketplace.

Qoqas makes each of his mods available for two weeks before their public release to the donors who contribute $2 or more to his Patreon. He won’t tell me exactly how much he’s making on the platform, but does disclose that it’s over $3,000 a month, which is more than enough to live reasonably well in his native Jordan. It’s made him one of the few people who can call themselves a full-time modder. A decade ago, Qoqas would be making his mods in his off-hours. Now, he has the tools to make it a day job.

Armageddon is a natural addition to Qoqas’s catalogue; in the past he’s released mods packed with a virulent zombie apocalypse, possessed children, twerking, the ability to expose cheating couples, Saw-like extreme violence, Bravo-like extreme romance, and the pathway to turn your Sim into a global pop star. A certain casual sadism has always been crucial to The Sims appeal, as anyone who dragged their surrogate digital selves into a swimming pool and deleted the ladder understands. The publisher of The Sims is a multinational company called EA; they’d never release Sims content with acute violence or sexual content. Qoqas, on the other hand, doesn’t have any shareholders to worry about. Above all of his many talents, he knows what Sims players want.

When I called Qoqas last week, he informed me that he had stepped away from his graphic design studies in college to officially call himself a full-time Sims modder. It’s his dream job, but that doesn’t mean he isn’t occasionally racked with anxiety. There are still so many unanswered questions about making a living while unofficially attached to someone else’s intellectual property, and he turns over those stresses in his head constantly. We talked about that, as well as how he first established a following in the Sims scene, and why edgy mods always do good business.

How did you start to build a name for yourself in the Sims mod scene?

[I made a mod] called Deadly Toddlers, and it was the first mod [of mine] that had custom animations and custom interactions. It added something new to the game. It was so different from what the rest of the game had to offer, because the Sims is rated for a 12+ audience. I made toddlers that were possessed and could kill people and could set things on fire. I think that’s why people were drawn into it.

What was that like? Did you want to get famous? Or was it just a passion project?

It was both. I was hoping to get some recognition because I put a lot of work into it. But you never expect it to blow up. I got so excited when I saw big YouTubers trying it out.

When did you decide to get on Patreon? Tell me about that decision.

“I made toddlers that were possessed and could kill people ... I think that’s why people were drawn into it”

I had a lot of requests from my audience to create a Patreon account, but I found it wrong to take money from people who support you, so I was against the idea.

But I had a fight with my dad, and I was afraid he was going to kick me out of the house, and I didn’t have any money to live on my own. That’s where I got scared. If I got kicked out, I didn’t have anywhere to go, so I needed to start this Patreon account. I never expected it to be so successful, I thought I’d get a small amount of money. I’m still in shock to see how many people are willing to pay to play my mods early.

When you created a Patreon, did you tell your fans that you were having issues with your dad? I guess my question is, with your patrons, how many of them are giving you money because they simply want to support you directly, and how many of them think of it as purchasing a product?

That’s a good question. I can’t know the percentage, because I don’t have a chart showing me how it all comes out. But I think the first people who supported me wanted to support me because of who I am, and then players who came afterwards are players who wanted to get the mods early. I’m thankful for both of them, of course.

In the past, you were making mods for fun, now you’re doing it as a career. How has being a full-time modder affected your workflow?

It became different, because before I could release it whenever I wanted. It was relaxing for me to work on the mods. But now, since this is my job, I have requirements I have to reach for delivering a mod. It can get quite stressful, especially if I’m not in the mood to work. But most of the time I’m really excited to work on something, I’m so passionate about it. But there’s a few little moments here and there where I don’t want to work and I’m forced to.

When someone reports a bug to you in a mod, do you feel more pressure to fix it than you did in the past? 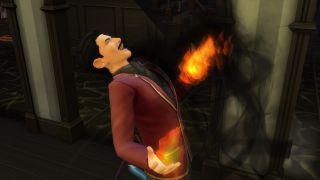 Yeah, definitely, because it affects my business. If I keep having bugs in my mods and I don’t fix them right away, then people aren’t going to pay for my future projects.

All of this puts you in an interesting position. You’re creating content, but all of that content relies on EA’s continued support of the Sims franchise. Does that ever stress you out? Like, what if one day EA pulls the plug on the franchise, or it becomes significantly less popular, what happens to your career? Do those thoughts ever run through your mind?

I worry about it. I’ve thought about it so many times. It stresses me out a lot, because that’s what’s going on. The Sims 4 is very slowly dying at this point. I think after Seasons [a recent Sims mod] it started to die. But I’m hopeful that The Sims 5 will have the same support for mods.

I’ve also started to back myself up. I’m learning how to create a video game, and am working in Unreal Engine 4 [a video game development kit that’s used all across the industry]. My hope is that if people stop being interested in mods for The Sims 4 or The Sims 5, I’m going to focus on this game and release it. That could become my second income. I’ve talked about [the game] with my community a couple of times and they’re excited about it.

Currently what’s your most popular mod?

My most popular mod was the Road to Fame mod [a mod in which your Sim becomes a professional singer or model]. But then EA released the official Fame expansion pack, so it kinda lost its luster a little bit. Now, it’s probably the Extreme Violence mod.

So this gets to an important part of the story. You make some fairly straightforward mods, but you’ve also made some mods that are inspired by horror movies or have some PG-13 sexual content. Obviously, The Sims publishers aren’t ever going to release mods like that, so how has supplying that content helped your business?

I think the majority of my success comes from that aspect. As you said, EA is never going to release an Extreme Violence mod, and a lot of players are looking for that in the game but they can’t find it.

Do you have a relationship with EA at all? Or are you on your own?

I’m pretty much on my own. I’ve never spoken to anyone who works for EA or anything. Some Sims Gurus [the term used for people who work on the Sims games] have mentioned me in comments. They leave comments on my work sometimes. That’s the only time I’ve ever had contact with them, and I felt so excited about it. At first I felt so unacknowledged from the company, I felt invisible. But once they mentioned me, I was more excited to work on mods.

What is your current project in The Sims? What mods are you working on right now?

My newest project is called Armageddon, which was released two days ago. It’s basically superpowers for your Sims. But I’m working on an update with supervillains, so by the time I finish that update it will be superheroes vs. supervillains.

Do you expect to be doing Sims mods full-time for the foreseeable future? What are your long-term plans?

I’m planning to fully develop the game that I’m working on this year. Once I release it, I want to see how things go. If the game is more successful than my mods, then I’ll just slowly go into the game development world. But if players don’t like it, then I’ll stick with modding, and I’ll have video games as a backup plan.

There are a lot of people making Sims mods out there, but only a few who are able to do it full-time. What do you think has made you so uniquely successful?

I think because I’ve been playing The Sims since I was 10 years old, I’ve developed a sense of exactly what players would like to see and what’s missing from the game. When I played all of them, the things I saw in each game and each expansion pack have been stored in my mind, and it helps me be creative.

Want more stories from The Goods by Vox? Sign up for our newsletter here.

Will you support Vox’s explanatory journalism?

Millions turn to Vox to understand what’s happening in the news. Our mission has never been more vital than it is in this moment: to empower through understanding. Financial contributions from our readers are a critical part of supporting our resource-intensive work and help us keep our journalism free for all. Please consider making a contribution to Vox today from as little as $3.