Before the pandemic, Max Kumangai spent his Saturdays singing and dancing his way through back-to-back performances of “Jagged Little Pill,” a rock musical on Broadway.

Saturday is still his busiest day. But whereas he once kicked off his workday by practicing lifting his colleagues above his head, he now begins by removing sourdough loaves from the refrigerator and preparing them for baking. (The oven in his Harlem apartment is so old that the numbers on the temperature dial wore off long ago, but he knows which dot to pick to get the color and crust just right.)

Once the loaves are done, he places them in paper bags stamped with the logo for Humpday Dough, the business he now runs with his fiancé, and heads to the subway to deliver them across New York City.

“I always come away from a day of delivery feeling socially fulfilled,” he said from his home.

Mr. Kumangai making a delivery near 145th Street in Manhattan.

Many people discovered a love of baking during the pandemic. Mr. Kumangai is among those who realized that their new passion could be more than a hobby.

Culinary schools have been swamped with inquiries from aspiring bakers. The Institute of Culinary Education, which offers classes in Los Angeles and New York, received 85 percent more applications this year than it did in 2019. Johnson & Wales University in Providence, R.I., said that its baking and pastry programs have generated far more interest than other culinary programs.

While longstanding brick-and-mortar bakeries have been struggling to find qualified bakers, many hobbyists have become so-called cottage bakers, selling bread from their homes or at farmers markets, according to Mitch Stamm, executive director of the Bread Bakers Guild of America.

Before the pandemic, Mr. Kumangai, 36, did not consider himself a bread man, and even banned his fiancé from bringing carb-dense loaves into their home. But with “Jagged Little Pill” on an indefinite hiatus, “I wanted something to work on,” he said.

That April, after cooking enough chicken potpies to survive for months should supermarkets run out of food, he decided to try his hand at a sourdough starter.

“It smelled weird, and not in a good way,” he recalled recently. He threw it out. A couple of months later, “I was thinking, I am doing nothing with my life,” so he gave it another shot.

The second time was the charm. Keeping a sourdough starter healthy requires feeding it twice a day with flour and water. The process reminded him of caring for a Tamagotchi or a pet. He found it pleasantly therapeutic.

So did many others. Penny Stankiewicz, a pastry and baking arts instructor at the Institute of Culinary Education, said it made sense to her that sourdough would emerge as a breakout star of pandemic-era kitchens.

Mr. Kumangai, right, and his fiancé, Michael Lowney, in their Harlem apartment.

“At this time, we were all so unstable in our core and we couldn’t really rely on anything, we had this thing we could nurture,” she said. Mr. Kumangai also enjoyed other aspects of making sourdough: stretching and folding the dough, learning about the science of the bubbles.

It was Mr. Kumangai’s fiancé, Michael Lowney, another Broadway actor sidelined by the pandemic, who nudged Mr. Kumangai to turn baking into a job. (Mr. Lowney is now his business partner.)

Last summer, they were returning home from a Black Lives Matter demonstration. Mr. Kumangai, who is Black and Pacific Islander, was feeling a flurry of emotions: despair and rage, but also elation at emerging from a physically isolating pandemic to connect with other people so intensely. 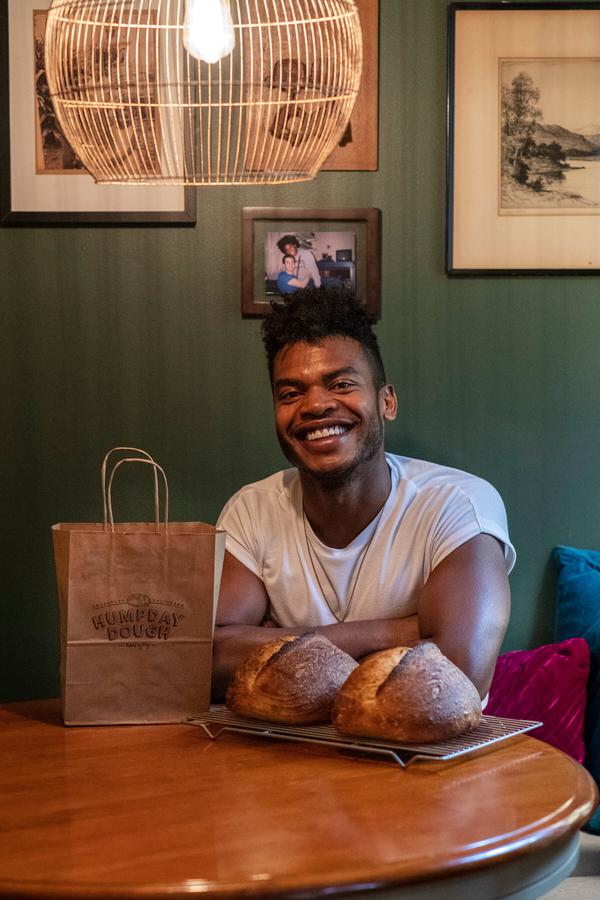 After a shift to video, Vice Media lays off writers.

The Education Department will wipe out $1.1 billion in debt for ITT students.

Forbes plans to go public in a $630 million SPAC deal.

“He noticed that I was needing something to continue that connection,” Mr. Kumangai said of his partner. Baking and delivering bread became the solution.

Over the coming months, they went from selling the occasional loaf of sourdough to a friend to delivering dozens of loaves a week — along with pancakes, crackers and focaccia — many to subscribers who found Humpday Dough though social media. Last month, the couple received 150 orders.

With the help of a couple in Brooklyn who had also started a pandemic bread operation, Mr. Lowney figured out how to become an L.L.C., meet health requirements and set up an online ordering system.

“I’ve realized I like making Google spreadsheets,” Mr. Lowney said. This was a shock.

Across the world, others were also seeing the potential to turn dough into dough.

While living with her parents in Boston, Leah Kahane, 23, began baking as an antidote to pandemic isolation. “Dropping cinnamon rolls off for my brothers and nieces was a way to feel connected to them,” she said.

It also reminded her that there was something she enjoyed more than executive recruiting for health care companies. She quit and enrolled in the Institute of Culinary Education’s baking and pastry arts program in New York.

Bakers who had long specialized in posting photos and videos of their creations were also finding a new potentially profitable audience. The self-taught Norwegian baker behind the sourdough-centric @breadbyelise Instagram account said she went from 10,000 to 67,000 followers during the pandemic.

The attention inspired her to launch a blog. When readers click a link and buy a product that she recommends, she makes a commission. The woman, who goes by Elise, said she hoped she would soon make enough to quit her other job. “It’s what I’m working toward,” she said.

This is not the first time a recession has spurred a new wave of bakers, said Mr. Stamm of the bread bakers’ guild.

“We saw a big uptick in the early 2000s when the markets failed and a lot of people who had large 401(k)s lost their jobs,” he said. “We saw a lot of them come into baking; a lot are still around.”

Ms. Stankiewicz was among those who found baking right around then. “For sure there was a feeling, ‘I hate my job, I hate my life, I’m going to wake up and follow my heart,’” she said. “I think the same thing has happened here.”

Jason Evans, dean of the College of Food Innovation & Technology at Johnson & Wales University, said that the 2007-9 recession also spurred “a bit of a renaissance” in the culinary arts.

But as the pandemic has been generating excitement among new bakers, it has also been wearing down old-timers.

“It has been a roller coaster,” said Celine Underwood, a founding baker at Brickmaiden Bakery in Point Reyes Station, Calif.

Many bakery owners have had to figure out how to stay afloat without allowing customers inside. Profits plummeted. Staff members fled.

“Then business suddenly boomed, even more than before, but with a fraction of the available staff,” she said. “Those we’ve tried to bring on during the pandemic have been unreliable, had personal chaos, or seem to just not be entirely stable or know what they want.”

Now it’s virtually impossible to get a qualified baker to answer a wanted ad, she and others said.

Cottage bakers like Mr. Kumangai don’t have to contend with such staffing challenges. Except, as life scoots toward normal, they are facing the temptations of jobs they knew before.

For months, Mr. Kumangai has been placing a cast iron skillet with lava rocks and a cup of water in his oven — among other tricks to make it function like a professional steamer oven. Just as he began looking into renting space in a commercial kitchen, he learned that “Jagged Little Pill” wanted him back in the fall.

He has convinced himself that he can do both: bake in the morning and perform on Broadway at night. He and Mr. Lowney will postpone scaling up the operation, however, for now.