Podcast | Editor's pick of the Day: How does India make her money?

It’s budget season already, and the big question on the collective Indian psyche is, Will this be an election budget? Ahead of April 2019, will Arun Jaitley rise in the lower house of the parliament to announce a bunch of schemes from the government’s exchequer – essentially your and my money – to appease the BJP’s votebank?

This budget is a crucial one for the sitting government, as PM Modi will seek to return to power a second time on the back of what analysts are already guessing will be a populist budget.

The Union Budget Union budget is the annual financial statement of expenditure and receipts of the government of India for the financial year from April, as required by the Article 112 of the Constitution. But like any budget – yours or mine – what we need to also understand is how much money there is, and how much of it can be spent and on what. And that first question is what we attempt to address today.

What is the source of income for the massive joint family that is India? How does India make its money? In our inaugural podcast ahead of the Union Budget (likely to be presented on the 1

of February), that is the question we will ask – a question Aunties and Uncles ask before making any marital alliance for their children – what is the source of your income? We will pose this question to the man of the hour, Mr India, on this Pick of the Day with me Rakesh Sharma on Moneycontrol.

Let’s show you the money:

The Indian government, like most others in the world, earns money, i.e., gets its revenues by collecting taxes from citizens and corporations, and on goods and services. The receipt budget, which lays down the details of the sources of earnings, is also part of the budget presentation.

As DNA reported last year, this is the source of our moneys:

>> 19 percent of the rupee comes from corporation tax

>> 10 percent from Service tax and other taxes

>> 19 percent from borrowing and other liabilities

If you bristled at the thought of a poorly maintained road, or irregular electricity supply, and screamed into the void, “I pay taxes! I deserve better!” you are right of course, you do deserve better. But know also that your taxes count for less than a fifth of the country’s collective income – 16 percent. 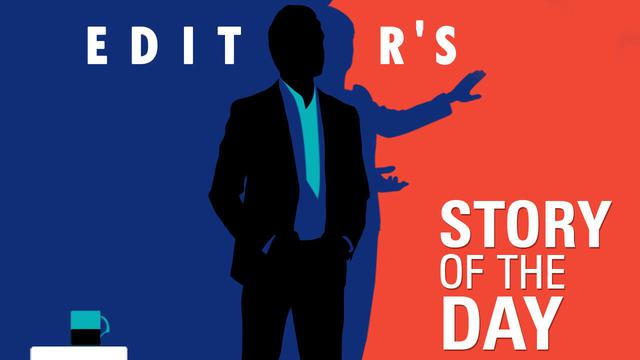 And then there are proceeds from divestment in public sector enterprises. The Economic Times reported last week that the government raised a record Rs 77,417 crore from sale of its stake in public sector units in 2018. The disinvestment programme is headed for another blockbuster year in 2019 with planned privatisation of national carrier Air India. “The BJP-led NDA, which in its previous stint privatised the most number of PSUs ever, continues to shy away from the outright sale of bluechip state firms to the private sector in the present regime and is instead pursuing a newfound strategy of merging companies to meet its revenue targets. While big-ticket disinvestments, including ONGC's acquisition of HPCL, CPSE ETF, Bharat-22 ETF, and Coal India stake sale, along with 6 initial public offerings (IPO) brought Rs 77,417 crore to the government coffers last year, the year was marred by botched attempt of the government to sell a 74 percent stake in Air India.”

Shares of the pie:

This joint family has several earning members contributing the coffers. But who is the top earner? As a useful sidenote, let’s take a look at the contributions of various sectors in the country to its GDP.

Agriculture, predictably, was the highest earner, but the contribution from agriculture has come down over the years – 17 percent of the country’s GDP was contributed by agriculture in 2017.

Chemicals are big business in the country. Reliance, one of the country’s largest companies, has a petrochemical refinery as one of its most important components. The chemical sector contributes about 2.11 percent to the Indian GDP in 2016. The petrochemical industry contributes approximately 30 percent to India's chemical industry, which is expected to become a $250 billion industry by 2020.

The star of the show, however, since the economic reforms of 1992, is the services industry. As Investopedia noted, “Over the past 60 years, the service industry in India has increased from a fraction of the GDP to over 55 percent in 2018. India, with its high population of low-cost, skilled, English-speaking, educated people, is a great place for doing business. IT companies contributed almost 8 percent of the country’s GDP in 2016.”

What goes into making the Budget – a behind-the-scenes account:

It stands to reason that the making of a magnum opus such as the Union Budget is a long drawn one. Rome wasn’t built in a day; Lagaan wasn’t made in a day. Don’t we all know that the Making of Lagaan is in itself a feature-film length documentary? The budget is also essentially the making of Lagaan – it is all about taxes, isn’t it!

It takes a village to raise a child, said Hillary Clinton in her book. What does it take to raise the Union Budget? Seemingly a ballet company and a juggling act. It juggles political pressures, the economy’s priorities, and the needs and wants of the most important component of the budget – the people of the Republic.

Act one: A circular is sent

Act One begins as early as August. A circular is sent to the various ministries and departments. Think of it as a large joint family, and the matriarch, the finance minister, sending the grocery book to the rest of the family. Pintu wants almonds because he thinks they will make smarter and Bunty wants whey protein because he thinks it will make him hotter. Different priorities; different needs. Different ministries; different requirements of cash. These ministries and departments fill the circular with details of the funds they need and the circular returns to the mother, Mr Arun Jaitley. That ends Act One.

Act two: Consultations are made

Consultations. If you’ve seen Game of Thrones or any show with palace intrigue and courtier dealings, then you get a sense of Act Two of the making of the budget. Ministry officials meet industrialists, farmers, labour unions, and other groups that have a contribution to make to the drafting of the document, the details of which affect all walks of society. The finance minister then chairs final meetings with stakeholders.

If we want parallels from history or entertainment, or historical entertainment, think Lord Varys or Oliver Cromwell. And you start getting an idea of who the main players of Act Two are. But, it’s not just the protagonist of the show Mr Jaitley, it’s all the officials in the ministry and the powers that be in the country. In my wild imagination, Act Two involves dark rooms with mahogany furniture covered in smoke. But it probably is more like the conference room you and I know and involves the Excel Sheets you and I loathe. A lot of Excel sheets.

The details of this act could put any political thriller to shame. This is the act of the Quarantine. You may have encountered the term Quarantine only in relation to diseases like bird flu or swine flu, but here we are, enforcing quarantine in the Union Budget.

Officials, stenographers, technicians – anyone who may have access to the details of the document are quarantined at North Block’s basement. They are cut off from the outside world for seven whole days. It’s a sort of Bigg Boss situation. And funnily enough, these officials will have to wait seven whole days to find out what happened on the actual Bigg Boss. No Facebook, no Instagram, no Snapchat. All I imagine now are horrified faces of twenty-somethings. The intrigue gets even more intriguing. Intelligence Bureau officials monitor movements and phone calls of these members. A phone jammer is installed to block calls and prevent leakages.

The background music for Act Three is an almost Hans Zimmer score. It’s tense, it’s hectic, and you are cut off from the world.

The final act: Printing of the speech

The Finance Minister’s Speech – it doesn’t quite have the ring of The King’s Speech, does it? Nevertheless, this speech, the climactic act of the Making of the Budget is among the most closely guarded documents in Indian politics. It is a culmination of the months of work by hundreds of people. The printing of the speech starts at midnight, two days before the Budget. It’s printed in the basement of North Block on Raisina Hill. The same North Block where so many officials were quarantined for seven days. The background score to this final act? A lot of sighs of relief and hopefully some champagne bottles being popped. There was blood, there was sweat, there were tears. There will hopefully be some champagne. Not just for the people behind the making of the Budget, but also to all us, the common men and women, the payer of the Lagaan.

We have learnt today the sources of the government’s income, and naturally, we need to move on to how it is spent, who gets the most, and what trends seem to be at work in the way budgets allocate money. These and other stories will feature in our run up to the budget over the course of January.