'Psychonauts 2' Review: Combining Sharp Humor and Pathos, It's Well Worth The 15-Year Wait

Psychonauts 2 comes burdened with over 15 years' worth of expectation and build up.

Its now-beloved predecessor was released all the way back in 2005 and, while it earned rave reviews straight out of the gate, it did underperform financially and only managed to attract a criminally small playerbase. As such, the odds of Razputin Aquato's story ever getting an official continuation looked rather doubtful for a long time.

Following the commercial let-down, developer Double Fine Productions moved on to experiment with other (equally underappreciated) ideas, such as 2009's Brutal Legend, and the prospect of another Psychonauts seeing the light of day was almost entirely written off.

Then, much to the surprise of everbody, it was announced in 2015 that a sequel was actually in the works, due to how the first title had gone on to attain cult status. What's more, it was also revealed that original creator (and industry legend) Tim Schaferwould once again be taking the helm.

Yet, in the intervening years, fans have only been treated to occasional glimpses of Psychonauts 2 and it was starting to feel like the project would never actually be released.

Given how these long-awaited sequels usually turn out, many fans started to wonder if this was perhaps for the best. After all, you only have to think of notorious misfires like Duke Nukem Forever or Shenmue 3 to realize just how badly these things can end up when they have spent too long languishing in development hell.

However, the launch of Psychonauts 2 is now finally upon us and it is a pleasure to report that it more than justifies the extraordinary hype. In fact, it might just be a game of the year contender.

Once again you are thrust into the shoes of Razputin "Raz" Aquato, a former circus performer and aspiring member of the titular Psychonauts organization. With a comprehensive recap video, the game catches you up on the core events of its forbear (as well as the 2017 VR exclusive, In the Rhombus of Ruin), so you do not need to worry about being at a disadvantage if you never played the original.

In short, the Psychonauts is a specialist government bureau that trains its agents in the use of telepathic powers, so that they can defeat evildoers across the globe. At the start of the sequel, Raz is investigating the disappearance of the organization's leader, Truman Zanotto, who was recently kidnapped for unknown reasons.

During our prologue, the 10-year-old recruit discovers that one of Zanotto's old nemeses, the long-presumed dead Maligula, has somehow returned from the grave and is now waging war against the spy faction. With the help of his fellow interns, Raz embarks on a quest to get to the bottom of this enduring grudge and to uncover the identity of a suspected mole that has been embedded within the Psychonauts.

To accomplish his mission, Raz will have to use his powers to enter the brains of friend and foe alike. From within these personalized little worlds, he can explore the geography of other people's minds, resolve any emotional hang-ups they may have, and gain crucial insights that will help him figure out exactly why Maligula is so hell-bent on destruction. Think of it as a mix between the subconscious espionage of Inception and the creative interpretations of the psyche shown in Inside Out.

From a gameplay perspective, these expeditions into the mind are depicted as fairly routine platforming levels, with players needing to gather collectibles, solve rudimentary puzzles and fend off enemies using Raz's physic powers.

Indeed, the vast majority of the mechanics in Psychonauts 2 will be instantly familiar to anyone who has ever played a Jak and Daxter or Ratchet & Clank instalment. The game hardly breaks new ground in this respect, yet the tried-and-tested design is pleasingly old-school, making it feel like a lost relic of the PS2 era (in the best way possible).

Enemies in "Psychonauts 2" are physical representations of emotions like regret, anxiety and judgement. 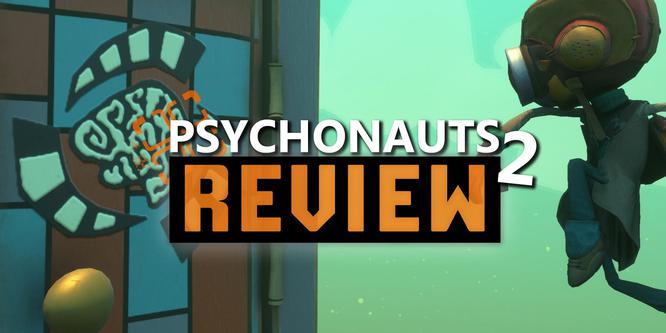 You will jump, climb, bounce between walls, balance on tightropes: all those standard Mario interactions. They might be basic conventions of the platforming genre, but they are executed exceedingly well here and it is always incredibly satisfying to traverse the environment. It helps that the controls are air-tight and precise as well, meaning that you will never once succumb to frustration.

On a related note, the game is surprisingly forgiving with its difficulty, only removing a portion of your health if you fall out of bounds and the combat encounters are easy to overcome. There is a generous suite of accessibility options for you to fiddle around with too, so that you can tailor an experience that best suits you. For instance, you can significantly decrease enemy damage if you are not bothered about challenge and just want to experience the engrossing story without being interrupted by a sudden difficulty spike.

Speaking of the narrative, Psychonauts 2's writing is blatantly its greatest asset, overflowing with creativity, sharp humor and pathos. Schafer and co. live up to their reputation for crafting memorable characters and funny dialogue, making this game a firm shoo-in for any storytelling accolades come this year's awards season. Everyone you meet has their own idiosyncratic quirks, honest emotional issues and well-defined arcs that evolve organically as the plot unravels.

Meanwhile, there are some unforgettable conversations that you choose to participate in with the various psychological constructs. Particular highlights include a moment in which you arbiter a dispute between a laid-back dragon and a bloodthirsty knight intent on slaying it, as well as a disturbing chat about existentialism with a sentient textbook illustration. There are so many of these fantastic dialogue exchanges that can be missed if you are not on the lookout for them.

Although the platforming mechanics are fairly standard, they are creatively implemented into the psychological theming. For instance, Raz can connect loose concepts into ideas by zipping between thought bubbles.

In addition to the pitch-perfect comedy, the central mystery is also legitimately enthralling and culminates with a number of shocking twists. There is a late-game revelation that will genuinely take you by surprise, and it leads to some unexpectedly cathartic moments as you defeat your enemies not with violence, but with understanding.

On that note, Psychonauts 2 is very ambitious in terms of the subjects it chooses to broach—with entire levels dedicated to issues like addiction, clinical depression and anxiety—yet it handles each of them with the utmost delicacy. It would be so easy for a game to botch these serious topics and fall flat on its face, but the team at Double Fine manage to handle everything with their signature subtly and cleverness.

Every time you reach the end of an area, there is an extraordinary sense of accomplishment because the game does such a good job at making you feel as though you have actually healed the mind in question. You are not just completing video game platforming stages here but are instead resolving other people's pain in a highly rewarding loop.

If that makes Psychonauts 2 sound a little too heavy for your liking, then rest assured that it is all executed with a light-hearted approach, again reminiscent of Inside Out. Internal struggles are represented in exceptionally imaginative ways here, with concepts like regret, panic and judgement all manifesting as different creature types for you to dispatch. Meanwhile, emotional baggage and nuggets of wisdom are physical items that you will have to track down in the levels.

Another level in "Psychonauts 2" transports you into the deranged mind of an would-be dentist.

Similarly, the landscapes of certain minds are among the most inventive ever committed to the video game medium, including a casino-themed hospital (that symbolizes the outlook of a doctor-turned-gambling addict) and a psychedelic tour through the perspective of somebody currently experiencing a sensory overload.

These levels, which all have their own unique visuals and gimmicky mechanics, are accompanied by some truly phenomenal music. In addition to the evocative orchestral score—that cycles through countless genres and styles to match each person's brain—there are some earworm songs that will linger in your memory until long after you have put the controller down.

If there is a downside to Psychonauts 2 it is that not every mind is up to the same standard. While there some are jaw-droppingly creative instances of level design here (another one deserving of mention is a surreal cooking show scenario) other worlds feel a bit lacklustre in comparison, especially towards the back half of the game. For example, one library-themed level is quite drab and uninteresting, apart from when it lets you interact with some bizarre interpretations of literary icons.

A few weaker levels aside, Psychonauts 2 is a truly special offering. The storytelling is top-notch, the characters are universally lovable and the environments are among some of the best in gaming. Let's hope that this time the franchise is able to find the audience that it so obviously deserves, because it would be a real shame to have to wait another 15 years for a trilogy-capper.

Psychonauts 2 is available now on Xbox One, Xbox Series S, Xbox Series X, PC, PS4 and PS5. As announced at this year's E3 conference, it is also one of many new releases that is heading straight to the Xbox Game Pass service at launch.

Psychonauts 2 is a testament to how good video game storytelling can be when left to creative people who have been allowed to let their imaginations run wild. It is a must-play experience.