Sedition a 'colonial' law, is it needed after 75 years of independence: Supreme Court asks Centre

The Supreme Court of India

The Supreme Court (SC) on July 15 while calling the British-era sedition law as "colonial", asked the Centre to respond to a former army officer's petition and questioning its "misuse."

The apex court while observing that law was used by the British against freedom fighters, including Mahatma Gandhi, asked the Centre if this law was needed even after 75 years of independence.

The top court said it would examine the law's validity and asked the Centre to respond to the plea which claimed that the law causes a "chilling effect" on speech and is an unreasonable restriction on free expression -- a fundamental right.

The court was hearing of the petition to strike down the sedition law as unconstitutional and quash all proceedings under Section 124A of the Indian Penal Code (IPC) pending with police and courts across the country. 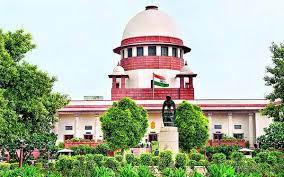 Read | Sedition Law: Sensitivity and trepidations of the State

Section 124A of the IPC makes any speech or expression that “brings or attempts to bring into hatred or contempt or excites or attempts to excite disaffection towards the Government established by law in India” a criminal offence punishable with a maximum sentence of life imprisonment.

On June 14, the SC had sought assistance of the attorney general on army veteran SG Vombatkere’s plea.

The CJI observed that the history of this section, has shown that the conviction rates are very low and there is “enormous scope for misuse of this section”, which, he said, is worrying.

“There is no accountability of executive agencies, much like cases being filed under Sec 66A, which was struck down by SC in 2015,” he said.

The Court called the law "a serious threat" to the functioning of institutions. "There is enormous power of misuse. We can compare it to the carpenter, instead of cutting wood, cutting the forest itself. That is the effect of this law," the CJI said.

The court observed that since the petitioner is a retired Major-General of the Indian Army and has served the country, hence it can’t be said that it is motivated. The court also said that several petitions have challenged the law and all will be heard together.

“These are all issues to be looked into. Our concern is misuse or law and no accountability of executive agencies. Let us see. I’ll look into the other petition,” the CJI observed.

The petition filed through advocate S Prasanna and heard by the bench comprising CJI Ramana, Justice AS Bopanna and Justice Hrishikesh Roy, said that “no authority including any state or central police must take any step in furtherance of investigation or prosecution of any cases in respect of and to the extent that the accusation is of an offence under Section 124A of the IPC.”