Sick of freemium? Here are 20 paid iOS and Android games worth supporting

et's get one thing clear from the start: I'm not a hater of free-to-play mobile games. Yes, there are some bad examples: over-aggressive under-crafted monetisation systems that pull every psychological lever they can to make you buy virtual items.

There are also lots of good ones, which are being played and enjoyed by a huge number of gamers of all stripes. Blame the bad game, not the financial model that it chooses to use.

What I do worry about, though, is the pressure that many developers feel to adopt the free-to-play model: the concern that if they don't ditch the idea of charging up front, their games will sink like stones on the app stores, and they'll go out of business.

Actually, paid games can make money still, even if – Minecraft aside – you usually won't find them in the upper reaches of the app store Top Grossing charts. They need support though: reviews and personal recommendations to help people get over that hump of having to pay before you play.

With that in mind, then... Here are 20 of the best paid mobile games in recent times: the kind I bang on about to friends who are reluctant to pay up front to play on their smartphones and/or tablets.

There are a couple of self-imposed restrictions. First, all these games are available for both iOS and Android, which leaves out some excellent iOS-only titles – recent stars like Kiwanuka, FTL: Faster Than Light and Leo's Fortune, for example, as well as the bewitching Year Walk and Device 6.

Second, no in-app purchases allowed, which chucks out some "paymium" (yes, ugh at that word!) games like Baldur's Gate Enhanced Edition, Football Manager Handheld 2014 and many more. Oh, and everything's recent, which is why there's no space for Minecraft: Pocket Edition.

The descriptions are adapted from my weekly best-new-apps columns for iOS and for Android, where paid, freemium and paymium games are all given a fair shout.

Read on, and please do make your own recommendations in the comments section. And one last reminder: NOT a free-to-play hater! I could (and likely will) happily compile a list of 20 freemium favourites that won't leave you feeling cheated.

The word “beautiful” is hugely overused in connection with apps: usually it means “has nice menus”. Monument Valley really is beautiful though, almost as much an artwork as it is a game. It’s a really good game, mind: inspired by the art of M.C. Escher, it’s a collection of impossible-architecture puzzles, which you twist to explore.Android: £2.49 / iOS: £2.49

Threes! is another mobile game guaranteed to make you go deep down the rabbit-hole of just-one-more-go addiction. It involves swiping number tiles to make matches: adding 1s and 2s together, then 3s and upwards. It’s brutally simple, yet once you’re in, you’ll find it hard to put your phone down.Android: £1.20 / iOS: £1.49

The original The Room was one of the best puzzlers on mobile devices, and its sequel continues the quality. “A physical puzzler, wrapped in a mystery game, inside a beautifully tactile 3D world,” as its developer puts it, this is carefully-crafted 3D puzzling posing a considerable challenge to your logic skills.Android: £1.99 / iOS: £1.99

One of the bargains on the app stores in terms of entertainment-per-quid, as this classic sci-fi strategy game makes its way to mobile. Your job is to fend off an alien invasion with a squad of tooled-up soldiers, with an emphasis on tension and careful tactics rather than simply blundering around shooting anything that moves.Android: £7.14 / iOS: £6.99

The Broken Sword games are marvellous: engrossing adventures that have navigated the path from PC to mobile with aplomb. This latest game continues developer Revolution Software’s run, sending you on the hunt for a stolen painting with puzzles and a well-worked storyline to hold your attention.Android: £4.99 / iOS: £4.99

Super Hexagon may just be one of the most hardcore mobile games ever: a "minimal action" arcade game with a punishing difficulty level – yet intensely rewarding once you got to grips with it. Its pulsating chiptune music is also a standout mobile-game soundtrack.Android: £1.99 / iOS: £1.99

Ridiculous Fishing is, yes, ridiculous: you lower your bait down as far as possible while avoiding a variety of creatures, then haul it back up again catching as many as possible along the way, hurl them into the air, and blast them to bits with a shotgun. Bad in real life, but fun virtually.Android: £1.99 / iOS: £1.99

Circular puzzle game Hundreds sees you tapping on circles in each level to make them (and the numbers inside them) bigger – adding at least 100 points overall without them touching. Which sounds slightly tortuous written down, but the game's genius is its stripped-down simplicity.Android: £3.25 / iOS: £2.99 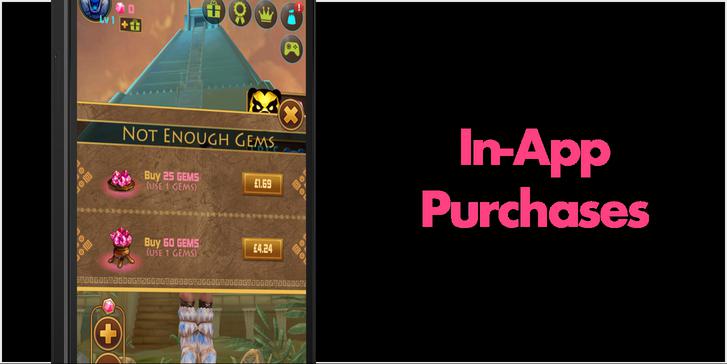 If you like a real challenge with your mobile games, then Frozen Synapse is an essential purchase. It's a turn-based strategy game originally released for computers, as you guide your squad through a succession of levels. 55 missions to play by yourself plus five multiplayer modes. That Android price may be a short-term promotion, by the way: it's excellent value for under a couple of quid.Android: £1.80 / iOS: £6.99

Braveland is great fun: a turn-based strategy game in a fantasy setting, as you work your way up from "humble warrior's son" to an army chief. The gameplay includes building your force and developing your character, with neat graphics and simple controls adding to the appeal.Android: £1.49 / iOS: £1.99

This is unusual: a game in a genre (card battling) that’s almost always freemium, but which uses no in-app purchases at all. More importantly, it’s really good: a mix of adventure-style storytelling and card battles, with 180 cards to collect as you play. The combo system, where you connect cards up, is a nice twist on similar games too.Android: £1.49 / iOS: £1.49

An addictive, accessible game that offers a sci-fi twist on the real-time strategy genre. The emphasis is on building a space-base through Tetris-like block-placement, while fending off waves of enemies. It's simple in all the best ways, yet soon gets incredibly challenging: but not to the point of frustration.Android: £3.29 / iOS: £2.49

Developer Lucky Frame has been bagging awards and critical acclaim all over the world for this game, and justifiably so. It sees you running your own hotel, defending it from rats, yetis and other invading critters in a tower defence style, but with the music (brilliantly) synchronising with your actions. An indie classic.Android: £1.49 / iOS: £1.49

“Procedural atmospheric mining” is a new genre to me, but Mines of Mars makes it very appealing. Claiming inspiration from Metroid and Motherload, it sees you exploring an underground world (well, planet: Mars) picking up weapons and items as you go. It’s got lots of depth (sorry).Android: £2.98 / iOS: £2.99

Minimalist racing game Impossible Road sees you zooming down an undulating track, with a pitch-perfect control system giving you plenty of latitude to find the best path (or, more likely, to mess up and crash embarrassingly). It's hypnotic, and challenging in the best possible ways.Android: £1.49 / iOS: £1.49

Hazumino is a great idea: part endless-runner game and part Tetris-style block puzzler, where you have to run, jump AND build. Cutesy graphics and a nagging chiptune soundtrack make it memorable, with simple gameplay but a big just-one-more-go factor to keep you playing.Android: £0.55 / iOS: £0.69

Japanese developer Kairosoft’s Ninja Village sees you building a ninja clan and sending them into battle, while also building their village into a prosperous settlement. If you’ve loved other Kairosoft games, you’ll love this. If not, it may make the perfect introduction to their charms. Android: £2.99 / iOS: £2.99

I was the world's worst transport mogul in the original Transport Tycoon game on PC, with a prodigious talent for messing up buses, trains and ships alike. I'm just as bad on mobile, but there's no doubt that Transport Tycoon is impressively faithful to the original game, as you build routes, buy vehicles and stations, and try to master 49 scenarios.Android: £4.99 / iOS: £4.99

The trivia genre is another area where in-app purchases are common, but ITV's Tipping Point is a paid app. Up to four people can play on a single device. It includes rounds like On The Buzzer, Against The Clock, Head To Head and Jackpot Push from the show, with more than 1,000 trivia questions to answer. Fun for fans.Android: £1.49 / iOS: £1.49

The latest GTA game to be re-released for smartphones and tablets is San Andreas, which came out in 2013. Developer Rockstar promises 70 hours of gameplay – if my memory's correct from the original console version, that's about right – with the usual gangster high-jinks in store.Android: £4.99 / iOS: £4.99