Six changes in computing that changed gaming industry for ever

Today technology lies at the very heart of what we consider gaming. Whether you’re imagining a fantasy world, experiencing a lush narrative or looking for something to play on the go, chances are you’re going to be interfacing with some sort of technology.

Here we’re going to dive into six of the largest technological shifts which caused tectonic shifts in the gaming industry. Let’s dive in.

While our conception of gaming in the 21st century may be centred on computers, that certainly hasn’t always been the case. From Go and Chess to Tabula and the incredible amount of card games, the concept of technological gaming is relatively new. Sure, many games have required players to interface with standardised boards, pieces or sets of items, but these games were very much analogue.

Thus, it can’t be understated how much influence the first computer had on quite literally allowing video games to exist.

This first digital computer known as ENIAC (Electronic Numerical Integrator and Computer) began construction in 1943, during the height of World War II, in the United States helmed by physicist John Mauchly and engineer J. Presper Eckert Jr. After its construction it wasn’t long until similar machines were used to play simple games— for example Bertie the Brain was constructed in 1950 to play tic tac toe and Nimrod learnt to play Nim in 1951.

While it took a while for these early computers to play anything notably complex, 1961 saw the completion of Spacewar! which is widely recognised as one of the first video games. Spacewar! was developed at MIT (Massachusetts Institute of Technology) by a group of students for the institute’s PDP-1 mainframe computer.

Ten years after Spacewar!, video games had begun gaining some traction and were read for larger-scale consumption. This came in the form of arcade machines, each equipped with all the tools to play a specific game over and over, provided players would cough up their small change.

The first commercial arcade game came in 1971, and was in fact a derivative of Spacewar!, entitled Computer Space. It saw players, controlling a rocket-propelled fighter, take on flying saucers against a starfield backdrop. It also served to immediately popularise high scores, which became a mainstay of arcade machines, with players earning free rounds of play if they could destroy enough of the UFOs.

Computer Space, however, isn’t one of the titles we all think about when we think of arcade machines. Those are classics like Pac-Man, Space Invaders and Donkey Kong, which came about in the following decade-long explosion of the arcade box.

While we may think of online games as a relatively new phenomenon, their history begins in the heart of the arcade machine-era. In this period the internet, obviously, looked a whole lot different. It used a system known as “packet switching” where data was transmitted in packets before being extracted and used by an application.

Given the slow speed of the 1970s internet, online games looked quite different than they do today. Realtime actions were virtually impossible, forcing the first online games took the form of MUDs (multi-user dungeons)—the most popular of which was the inventively titled MUD1.

Over the following decade internet gaming progressed at a snail’s pace, hindered by the lack of widespread internet, resulting in low commercial appeal. However, games like Islands of Kesmai, Air Warrior and Famicom Modem’s port of Go did come into existence.

But thanks to the rapid uptake of the internet throughout the 1990s, online games began to explode resulting in a tonne of legendary titles such as Quakeworld, Starcraft and Counterstrike. It’s also worth noting that at this point many home consoles also began supporting online play.

From its earliest days, computer gaming was tied to the big, behemoth-like structures that were computers. However, as computer parts became smaller and more efficient gaming became much more widespread—first fitting into arcade machines, then personal computers then handheld devices. 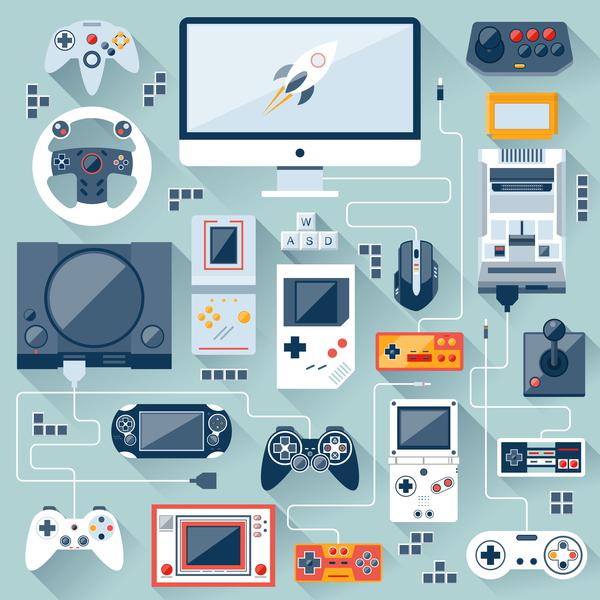 This facet of the gaming industry can be seen in many ways. It can be read for the PC and Console market which to this day continue to see more and more powerful components being produced on smaller scales requiring less energy. But more it can be seen most clearly in the move to handheld gaming.

In 1976 the toy company Mattel released the world’s first handheld electronic game - Auto Race. It was a fairly rudimentary game where you would switch between three lanes to overtake other vehicles on a Formula-1 track. Soon after this many companies scrambled to make similar handheld devices, but few progressed past similar simple and singular formulas.

By the late 1980s, handheld consoles began to be a mainstay of the gaming market—the most successful of which, of course, being Nintendo’s Game Boy and its many follow-ups.

As mobile phones exploded in popularity in the late 1990s, many users found a now iconic version of Snake in their pockets—the most popular version originating from Nokia’s 1997 devices. While this wasn’t the first mobile game, in fact the Hagenuk MT-2000 came with a variant of Tetris, it certainly made the most waves with estimates placing that the game has since been found on 350 million devices worldwide.

But as smartphones quickly powered-up, the touch screen became a mainstay—providing one of the best interfaces for gaming in small form factors. And soon, we all had devices packed with games stuffed into our pockets.

Today, mobile gaming dominates the market, taking up 51 per cent of the industry’s revenue. And with cloud gaming quickly finding its feet, it’s not unfeasible that we may all be making the move to mobile sometime soon.

Considering the stellar explosion of nostalgic games Old School RuneScape, we have also been shown that mobile gaming can rival the popularity of games found on other devices. Speaking of Old School RuneScape, if you’re picking it up for the first time or are looking to get ahead consider heading over to Eldorado, where you can purchase high-level OSRS accounts. There you can also find currency, items and boosting for many other games whether they be on mobile, PC or consoles.

While XR has caught wind in the last few years, it has been a long time coming. In the 1950s, Morton Heilig conceived of Experience Theatre which could encompass all the senses, drawing viewers into the onscreen action. Soon he created a prototype of the Sensorama, which he unveiled in 1962.

But it wasn’t until Palmer Luckey designed the first prototype of the Oculus Rift that VR began to break through in a meaningful way. Since then, the explosion of headsets - PSVR, VIVE, the Valve Index, google cardboard, smartphone VR and Oculus’ many offering—have forced the VR market into the limelight allowing users to experience the glory of fully immersive and affordable virtual worlds.

Yet, what is most exciting about VR is that it is still evolving year on year. It is predicted that the global VR market will grow to $62.1 billion by 2027 - a truly formidable almost six-fold rise.

Technology continues to be an essential part of gaming, pushing us to experience ever-more complex and graphically impressive worlds in more ways than ever before. And one of the most exciting parts about this partnership is the fact that this means that gaming will continue to evolve alongside technology for decades to come - if not for ever.

Independent journalism costs money. Support Times of Malta for the

price of a coffee.