Simon Amstell is sitting in his office. Behind him, on the wall, are dozens of coloured post-it notes – which, one suspects, is the backbone of his new show, Spirit Hole. This autumn, the curly-haired comic is heading back out on the road for a 39-gig nationwide stand-up tour, and the relief is palpable. After 18 months of pandemic-disrupted live events, Amstell is simply happy to be in front of an audience again.

In the early days, before he first started touring for shows like What Is This and To Be Free, he felt it a rather silly thing to do, schlepping around the country from venue to venue. But as soon as he did it, he got hooked. “Once I started touring, I got to see the joy of it,” he admits. “And then when it wasn’t possible, that was very challenging to my sense of self. And my mortgage, I suppose!”

Dubbed “a blissful, spiritual, sensational exploration of love, sex, shame, mushrooms and more”, Amstell’s Spirit Hole tour will likely pick up where his 2019 Netflix special Set Free left off. On TV, Amstell is a genial, boyish presence, as anyone who has seen him host pop quiz show Never Mind the Buzzcocks will attest. On stage, it’s different. He frequently takes audiences through surreal digressions drawing from his own often highly personal — and revealing — experiences.

This is very much Amstell’s methodology, skating over the thin ice of his own life. His BBC2 sitcom Grandma’s House, set in which he co-wrote and starred in, cast him as a former television presenter seeking out meaning — in the setting of a Jewish family home in Ilford.He again ploughed this semi-autobiographical furrow with 2018’s feature film Benjamin, which he wrote and directed. This time he got someone else — Colin Morgan — to play the lead, but the parallels were clear in this story about a rising film director.

Nothing is held back, either. In Set Free, he talks about going to an orgy — and the acute embarrassment that entails. “In this show, there is another sex party!” he pipes up. “Actually a sex club in Berlin. I’m even more a fish-out-of-water than I was in the previous story. The problem with sex parties is you can’t control who’s there. So you think it’s gonna be a fun ...oh, wow, great, a big party full of naked people! But it’s not the specific naked people that you might find attractive. It’s just naked people. And that’s not necessarily a great party.”

As for the “mushrooms”, of the magic variety, Amstell is very much into smashing down the doors of perception. In the past, he’s visited Peru and taken the hallucinogenic herbal drink ayahuasca, in the Peruvian rain forest, which he experienced across four ritualised ceremonies. Similarly, he imbibes magic mushrooms for their medicinal qualities. They are said to alleviate depression, something Amstell was diagnosed with in his thirties (he’s 41 now).

“What I like about it...in a similar way to getting yourself a therapist, what you’re doing in that moment is you are accepting the fact that you can’t help yourself,” he explains. “You can’t do whatever you need to do on your own. You need a therapist to talk to, you need the mushroom to expand your mind beyond the limited ideas it currently has so that you can let go of the anxiety and depression and just be a more flowy, spontaneous, joyful, little animal.”

Amstell is clearly not in it to sit around and get high. “I’m very lucky to know people who have mushrooms! And I’m lucky to have been taught how to use them responsibly for healing. I think I’m healthy enough to know that I’m not able to cope with everything on my own. At some point, I need something to clear away the mud that’s in my head that’s built up. Otherwise ...all that noise eventually just becomes very loud. And you need something as powerful as the magic mushroom — or a good therapist — to just tell you that everything you’re thinking is quite silly!”

From the outside it sounds like Amstell’s life is one long sex party-magic mushroom freak out, I suggest, semi-jokingly. “I wish it was that! The only thing problem with having really incredible experiences occasionally is that you can’t be constantly having them! At some point you need to sleep! I’ve heard some guru say: ‘First enlightenment, and then the laundry.’ You can attain these profound realisations. But then you’ve still got to wash your socks.” 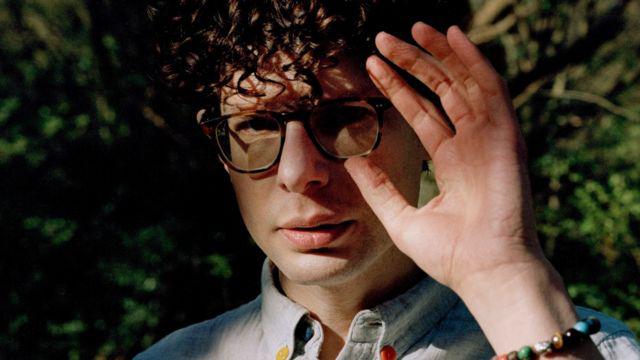 Getting older is another prime topic of his new show. “Once I was 40 it was fine. But from around 38...I just couldn’t cope with it.” Now he’s come to accept the inevitable. “Nothing can be done about it. And we’re in a culture where it’s seen as a real problem. But this is what happens: you’re born, you get older, you die and decompose. When I think about decomposing I feel very calm about it now. Because I think of course I’m going to decompose. I’m a bit of the Earth!”

Since then, like everyone, he’s been in eternal lockdown, but it’s seemingly been good for him. “At first I was feeling very frustrated and angry. And then I thought, ‘Oh, this is an opportunity to really practice what I’ve been trying to learn all these years’, which is patience, trust, surrender, to just let go of any idea that you’re in control of everything. It was quite healing in a way and also it brought up a lot of stuff to come up that I hadn’t really addressed before or touched on...various childhood traumas, which I’ll be turning into comedy and bringing to the show, I imagine!”

Today, he doesn’t specify what those traumas are, but you can take your pick. His mother and father divorced when he was 13 (and his father remarried a decade later). And he’s previously talked about coming out when he was 21 and being summoned to his aunt and uncle’s house. His aunt didn’t stop crying. His uncle, an accountant, gave him a book written by one of his clients, A Gay Man’s Guide to Safer Sex. And his father suggested he needed therapy. “He denies it was electroshock therapy,” Amstell wrote in The Guardian. “But he definitely gave me a flyer for something,”

Childhood traumas aside, Amstell speaks warmly about his upbringing. He was born in Gants Hill, in East London, the eldest of four children. What about his Jewish identity? Was he very connected? “I grew up culturally Jewish, so there wasn’t much religious stuff, but it was definitely quite a Jewy upbringing,” he says. “My mum and my grandma, the way they speak...and how funny they are. It was all pretty Jewish! I didn’t realise at the time!”

While he admits that Woody Allen was a big influence on his film Benjamin, does he believe in what is notionally referred to as a Jewish humour? “I suppose it must exist. But I feel like all American comedy, like all the sitcoms, like everything...it’s likely there’ll be more than one Jewish creator. Even if it’s a sitcom about people who are not Jewish. So those rhythms are there. I feel it’s hard to separate it from just humour generally.”

He first appeared on TV when he was 14 as a contestant on popular video game show Gamesmaster, the same year he started performing stand-up. Five years later, he landed a gig on a Nickleodeon show before he scored the motherload —presenting Channel 4’s teen show Popworld, aged 21. His folks were “thrilled”, he remembers. “I had tried to calm them down most of the time. Once I was on the stage, it so exciting for them. I had to remind them that I was still a person!”

You can imagine the delight in the household at his sudden rise to fame. “I have a cousin who’s a doctor. And suddenly that was just irrelevant. Whereas before, that had been the big thing that had happened to the family. One of us has become a doctor. And then all I had to do was present a pop show very early on Sunday morning on Channel 4. And suddenly, it was like I had gone to university for five years and learned how to save people’s lives!”

Still, making people laugh is a pretty healthy thing to do. After the Spirit Hole tour concludes at the London Palladium in November, Amstell will turn his attention to directing another feature from a new script he’s written. “The character isn’t as close to me as Benjamin was. For one thing, the character is a woman. So that’s exciting. She’s like bits of me and bits of a couple of friends of mine.” Somehow you suspect most of it will be dredged from Amstell’s endlessly fascinating psyche.