Like any child of the internet, I am quite good at conducting reconnaissance missions online. But while others may track the relationship status of their acquaintances through Venmo or cross-reference LinkedIn and Twitter to locate a dating app match, I tend to use my powers for one very specific purpose: to determine whether or not a restaurant is going to serve me a decent plate of hash browns.

If hash browns are a top-five food for you (as they are for me), being a spy online is the only way to guarantee you won’t get burned at the table. Diners and brunch establishments across the country play fast and loose with the phrase, placing it on their menus with abandon, and then, to my total devastation, serving breakfast potatoes instead. When going out to eat was still on the agenda, I would dive deep into a restaurant’s geo-tagged photos on Instagram and user-submitted pictures on Google Maps in advance of my visit, looking for any clue that I would get hash browns—actual, beautiful, shredded hash browns—and not a scoop of cubed, sometimes herby, sometimes pepper-and-onion-studded chunks. A totally fine food, but they’re not hash browns. Not even close.

Perhaps you’re thinking that the solution to my problem is to get my fix in my own kitchen, which is a reasonable idea! But making hash browns at home is—I’ll just say it—so annoying. Most recipes require soaking your raw, shredded potato in cold water to rinse off the excess starch, then squeezing every last bit of moisture out before tossing it in a pan. If you don’t eliminate enough liquid (from the potatoes that you, again, just soaked in water), they will get soggy instead of crispy, a.k.a. a total bummer. It wasn’t until I experimented with a few boiled potatoes left over from some other project, cold and straight from the fridge, that Cheater’s Hash Browns came into my life—and they aren’t going anywhere.

Hash browns made from partially boiled potatoes are softer and creamier on the inside than your average diner hash browns (I consider this a good thing) and also get extremely crispy on the outside. The key is to cook your spuds just long enough that you can easily stab them with a utensil but not so long that you can crush them with your fingers; you want the shreds to hold their shape while you fry. This means that if you’re boiling potatoes for some other purpose (mashed? crispy smashed?) and want to throw in a few extra for hash browns at a later date, you need to pull them before the rest of the batch is ready to go. I often boil potatoes—Yukon Golds, which I find work best for this technique—specifically to become hash browns. Once cool enough to handle, you can grate them right away, or cover and refrigerate them for up to three days, for hash browns at a moment’s notice. 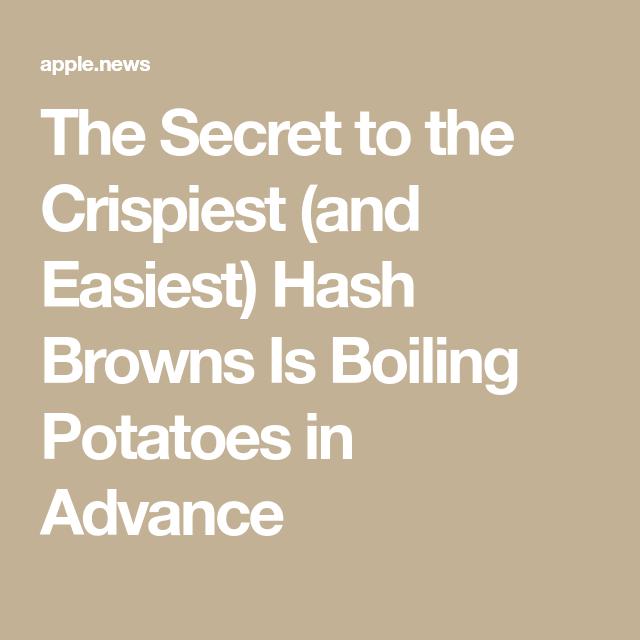 Here’s how to make easy, crispy hash browns at home: Start by boiling two pounds of Yukon Gold potatoes, which is about six medium-size spuds, until just barely fork-tender, 15 to 20 minutes depending on the size of your potatoes. Drain and set aside to cool.

When you’re ready to get your HB on, grate the cooked potatoes on the large side of a box grater into a bowl. The skins will peel off as you grate, but if you get some pieces in the final mixture, that’s okay. Add lots of black pepper, one teaspoon of kosher salt, and a pinch of whatever else you feel like—garlic or onion powder is good, cayenne is classic, but I always use about 1⁄4 teaspoon of smoked paprika. Gently toss with a fork to coat.

Next melt four tablespoons of unsalted butter with one tablespoon of olive oil in a large nonstick pan over medium-high heat. Using your hands, sprinkle the seasoned potatoes across the surface of the pan in a relatively even layer. Cook, undisturbed (seriously, don’t touch them!), until deeply browned on the bottom, 5 to 7 minutes.

Using a flexible heatproof spatula, gently break the potatoes apart and toss in the pan. A scooping and flipping motion is best; resist the urge to chop-chop-chop up the hash browns as they cook as par-boiled shards are less sturdy than raw ones and you want them to generally hold their shape. Cook, tossing sections with the spatula, about 8 minutes more (if at any point the pan looks dry, drizzle in a teaspoon or two of olive oil). The finished product should be well-browned and delightfully crisp in spots with tender shreds throughout. Transfer to a plate and immediately season with salt.

My guess is that after your first audibly crunchy bite, you’ll be Team Cheater hash browns for life—with the social media to prove it.