This looks like an unsafe place to hang out.

Why does this thing want to take over my planet and capture my friends?

A variety of "super" aliens can either throw special attacks at your crew or power up its weaker allies.

Expect this thing to spit at you.

I think it's going to smash a wall.

Should anyone on your squad go down, you'll need to free them from a "stasis foam" lockdown to save their lives.

Destroy walls to peek at foes, but beware that foes can do the same to you.

Use your precious ammo to clear the "sprawl," or destroy certain nests for greater effect.

A look at how dangerous an arena can get.

We should probably kill it before anyone gets immobilized.

On Saturday, Ubisoft joined the E3-timed announcement fray with its latest Ubisoft Forward video presentation, complete with a mix of familiar and brand-new game announcements.

The showcase kicked off with Rainbow Six: Extraction, a three-player co-op battling game that drops an alien invasion on top of Tom Clancy's tactical-combat universe. (Did I miss that particular subgenre of Clancy books? No matter.) The game will launch on PC and most consoles on September 16.

A meaty gameplay preview video showed a three-player squad moving through one of the game's combat levels, which will combine bespoke architecture with random alien placements—and Ubisoft's reps hinted to the aliens being able to create walls, gates, and restrictions to randomly redefine your descent into each level's belly. The resulting gameplay resembles Left 4 Dead, with a mix of weak and superpowered aliens (dubbed "Archies") potentially splitting squads up as they battle and survive.

Ubisoft didn't clearly answer how the game's ongoing experience and ability systems will work, but Ubisoft's reps hinted to this including a severe risk/reward structure. If you progress more deeply into a particular level, you'll be able to score more rewards, but if any player in a squad is left behind in a mission, that player will lose progress. And these levels are even tougher thanks to the fact that you'll need to melee-kill certain enemies to extract "tissue data," instead of merely killing from afar and running away.

Exactly how much progress will players lose upon death? And how much will this resemble permadeath and thus result in stressful online griefing opportunities for strangers? Those issues remain unclear. But Extraction does look like a potentially interesting twist on co-op alien battling, especially with R6: Siege's gadgets and destructible walls figuring into the genre in seemingly unique ways. Plus, announced cross-play support has us thinking this game might have significant online-play legs.

This announcement image went live roughly 12 hours before the game was formally announced, thanks to Nintendo uploading the game's info page ahead of schedule.

Some sort of painting-based puzzle. 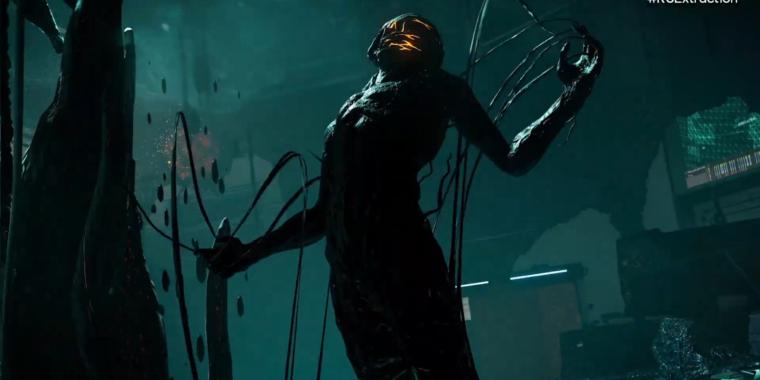 Before you finish your turn, you can activate attacks that immediately trigger and do significant damage.

"Sparks" are a cross between Lumas and Rabbids, and they power up Mario and his friends.

One of the event's biggest (albeit unsurprising) stories leaked hours before the conference: next year, Ubisoft will continue its partnership with Nintendo and will release a sequel in the Mario + Rabbids crossover franchise. The new game, titled Mario + Rabbids: Sparks of Hope, sticks to the series' weird premise of original Super Mario characters joining forces with Rabbids, giving them all guns and making them fight bad guys using turn-based, XCOM-like tactics.

This time, the crossover universe borrows from Super Mario Galaxy's canon by sending the combined battling forces across multiple planets and introducing Rabbid-ized versions of Rosalina and Luna. Unsurprisingly, the sequel will continue the crossover series' streak of remaining a Nintendo Switch exclusive.

Ubisoft pledges to include more musical genres in Rocksmith+, particularly "subgenres of metal."

The service will include its own built-in chart creator... but only for songs that Ubisoft has formally licensed. Hence, you'll probably want to stick to the 2014 original if you want access to a fully open song library.

Another Saturday morning leak revolved around today's announcement of Rocksmith+, a new "live" version of Ubisoft's "Guitar Hero, but with real guitars" series. Like last time, you can connect your favorite real-life guitar to your console or computer to enable a mix of guitar-playing tutorials and rhythm-gaming strums through familiar songs... only this time, you'll pay a subscription-service fee for the privilege. This follows Ubisoft's decision last year to sunset the existing Rocksmith service, which had revolved around individual DLC purchases of add-on songs.

If you've never bothered with Rocksmith before, a subscription service may ultimately make more sense than lump-sum purchases of individual songs to strum to. But it's unclear whether Ubisoft will maintain enough content and variety to make the new game's version worth investing in for the longterm, especially for those who already dumped plenty of cash into Rocksmith's seven-year-old last-gen structure (or prefer the older PC version's support for user-made add-ons). Today's announcement of a free beta will at least let those with compatible guitars try before they might one day subscribe—and see whether the new game's mobile app version holds up in terms of using your phone's mic to track your guitar strumming accurately.

Riders Republic will launch on September 2, though we don't know exactly which platforms yet.

A hint to how big RR's sweeping outdoor environments will be.

Exactly how the game plays out, however, remains unclear, since it appears to include a ridiculous number of vehicles, modes, and single player and multiplayer challenges.

Score points to claim sections of a level.

Chill out by yourself and skydive wherever you want.

Bicycling will switch between first-person and third-person modes.

The camera will pan to third person when you're pulling tricks.

Wingsuit with dozens of others.

A wingsuit with a rocket? Sure, why not.

We now know that Riders Republic, announced during an E3-timed event last year, will launch later this year on September 2. But its newest trailer did more to obfuscate and confuse than it did to clarify exactly how this extreme sporting smorgasbord will play out on our own PCs and consoles.

On one hand, it includes 64-player races where everyone can pick between wingsuits, bikes, snowboards, and more. On another, it includes team-based score-control online modes that resemble turf acquisition modes in older Tony Hawk games. And beyond that, it lets players switch between first-person and third-person bicycling on top of massive mountains, or parachute and glide over the top of its massive worlds, or even attach a rocket-powered backpack to a glider and ride wherever players please.

Hence, it clearly follows the DNA of "ride as you see fit" in 2018's The Crew 2—and thus you should probably set your expectations accordingly.

This is technically Ubisoft's second Avatar game, following the one they made in 2009.

You'll need more than one dragon to have a fighting chance.

Lush Avatar-caliber environments to romp around.

After showing off footage of existing and previously revealed games, Ubisoft teased a Far Cry 6 season pass that will put players in control of various series villains, all connected in a new, wacky metaverse. The show then concluded with a peek at Ubisoft's upcoming game based on the Avatar film franchise, titled Avatar: Frontiers of Pandora. The game is slated to launch in "2022," which could very well place it alongside Avatar 2's theatrical launch, and it will apparently include a mix of Avatar's alien creatures facing off against aggressive human invaders while riding dragons. But it only appeared as an apparently pre-rendered sequence (labeled "powered by Snowdrop," as if to imply it was made inside a real game engine, but if that's real gameplay, then my name is James Cameron).