Licensed and available blocks in the Gulf of Tonkin.

Vietnam's government is attempting to regenerate exploration in the Gulf of Tonkin, following presentations by state oil company PetroVietnam in London and Houston late last year. Eleven offshore blocks have been offered, some of which were only recently relinquished due to unsatisfactory drilling results.

However, since these disappointments, the geology of the region has been reappraised. In 1993, Geco-Prakla acquired 3,173 km of seismic, gravity, and magnetic data, mainly along the Song Hong (Red River) Basin, and also covering six already licensed blocks. The 80-fold survey, extending from blocks 106 to 118, was compiled using a 4,000-metre streamer and 25-metre shotpoint intervals.

Geco-Prakla has also reprocessed 2,954 km of seismic originally acquired by Iskatel in 1983 for Vietsovpetro, in order to improve the resolution of the data. Interested block bidders must purchase the two datasets, then present a technical evaluation report and PSC proposal for their preferred block(s) to PetroVietnam by March 31.

To date, 13 exploratory wells have been drilled in the Song Hong Basin. The original proprietor of Block 106, Total, encountered gas and condensate shows in a 1988 drilling programme. (This block is currently available again in a modified form.) At the southern end of the basin, BP found gas which was contaminated by carbon dioxide.

Most recently, OMV picked up block 104 on the Thanh Nghe Moncline, also extending into the Central Depocentre. OMV has acquired seismic and is evaluating the acreage. Other current Song Hong blockholders are Idemitsu, IPL, Sceptre, and BP.

Song Hong, at 200,000 sq km, is the largest of several Tertiary sedimentary basins in the Gulf of Tonkin. According to Geco-Prakla's evaluation report summary, it is roughly rhomboidal in shape and may contain 20,000 metres of Tertiary sediment at its depocentre. 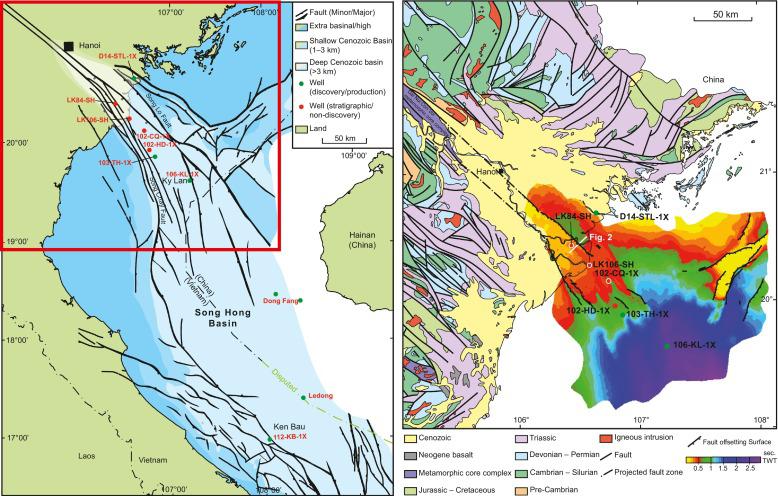 The basin itself is divided into a number of subbasins or grabens with intervening highs, most of them formed in the Eocene and Oligocene. At its southern end are a series of narrow, high relief, north-northwest to south-southeast trending horsts and grabens: the Danang High, Quang Ngai graben, and the Triton Horst. Due to the piecemeal well coverage over Song Hong, understanding of the stratigraphy is as yet restricted, although the sequences drilled in the basin's southern part are clearly contiguous with those known in the north, says Geco-Prakla.

Good quality source rocks have been proven within the Oligocene, dominated by Type II/III Kerogen with gas potential in particular. In the Beibu Wan Basin to the north and the Mekong Basin to the south, organic rich lacustrine shales are known to have generated hydrocarbons, and similar features may be common in the deeper parts of Song Hong. Oil samples from Miocene carbonates on the Triton Horst probably derive from yet to be identified marine source rocks.

According to Geco-Prakla, an attractive but to date untested play in the Gulf of Tonkin is submarine fans in the basin's central section. Numerous examples are identifiable on the regional seismic, many of which lie within the hydrocarbon window. These have the potential to be sourced and sealed by adjacent basinal shades.

Around the flanks of the Song Hong Basin and on intrabasin highs, Lower and Middle Miocene carbonates have been found which suggest promising reservoir characteristics, and this may turn out to be one of the basin's most attractive plays. The CO2(-heavy gas found on the Triton Horst may prove to be a local rather than a regional problem.

Vietnam's authorities will be hoping that interest in these blocks has revived following the discovery of 3.5 tcf of gas at Yacheng on the Chinese side of Song Hong. China will be hoping it doesn't.

The Chinese Foreign Ministry reportedly criticized Vietnam for holding the Gulf of Tonkin presentations, and including in the license bidding process waters next to China's Hainan Island. It claimed this move ran counter to the agreement on how to solve the boundary dispute between the two countries, which extends to the potential oil zones of the Paracel and Spratly Islands.

News of further speculative and exclusive geophysical surveys offshore Vietnam has been muted, although it is understood that European and American geophysical contractors are discussing marine seismic and aeromagnetic surveys around the Mekong and Con Son Deltas and elsewhere. Canadian Occidental has reportedly commissioned a 900 km, 2D seismic survey for Block 12 (West).

Recently, Geco-Prakla established a centre in Ho Chi Minh City to process 2D and 3D seismic marine and land data using the company's worldwide common software package. It will support onboard processing activities of Geco-Prakla's seismic vessels working off Vietnam, and will also be linked to all the company's other centres worldwide through Schlumberger's internal network system. Hitherto, all Vietnamese geological data has had to be sent overseas for analysis and interpretation.