Want to get out on the water? Here's a beginner's guide to kayaking the delta

Out of Antioch, a popular trip involves renting a kayak for a three-hour sunset paddle to Kimball and Sherman islands, where a nesting pair of bald eagles has taken up residence.

“They have a little baby now and that’s really cool,” said Kathy Bunton, owner of Delta Kayak Adventures out of Antioch Marina. “Every trip there in the last three months, we’ve seen at least one of the bald eagles every time.”

Five boat rental services out of Antioch and nearby Bethel Island, starting at $18 for a single kayak, are your passports to wide-open spaces and miles of water.

Between the pandemic and fall wildfire smoke, last year was rough for many outdoor tour operators. Bunton said she had to shut down for four months. But with restrictions across the Bay Area beginning to ease heading into summer, pent-up demand is driving kayak reservations through the roof, she said.

“Now it’s the busiest I’ve ever seen. I ended up hiring four people,” Bunton said. “To get out on the water, even if just for a little bit, is a great way to get away.”

On weekends, kayak rentals are selling out by reservation so fast that Bunton is not allowing walk-ups or all-day rentals. “We want to give everybody a chance to go,” Bunton said. For all-day rentals, book on a weekday, she said.

Marilyn Low of Martinez raises her arms in excitement while trying on life jackets during a beginner's kayaking lesson with Kathy Bunton of Delta Kayak Adventures in Antioch, Calif. Friday, May 21, 2021. Kayaking season is upon us and there's no better place in the Bay Area to learn while getting away from the city and crowds than the delta.

For new kayakers, the paddle to Dow Wetlands or Browns Island is a great place to start. Launch from Antioch and you can enjoy bird-watching and long-distance scenic views across to Mount Diablo. Those trips take about two hours. It takes another hour, round trip, to venture to Sherman Lake.

For most in the Bay Area, the closest rental service for the San Joaquin Delta is Delta Kayak Adventures out of Antioch Marina, 42 miles from San Francisco. When you first arrive at the marina, you’ll discover the “rental shop” is actually a sailboat at the dock with a nearby fleet of kayaks, 23 singles, 7 tandems, plus Stand Up Paddleboards and a Pescador pedal fishing kayak.

Newcomers will get an orientation, and then with calm water and no high winds in the forecast, be set free.

It’s a short paddle downstream to the Dow Wetlands Preserve, a rich habitat for resident shorebirds, with egrets and herons common, as well as migrants, including avocets and stilts. The occasional river otter is always a happy shock. With calm water when the wind is down, you can extend to New York Slough and the edge of Winter Island and Browns Island, also excellent for a variety of shorebirds.

There are other boat and kayak services at Bethel Island, located another 20 minutes or so past Antioch. If you’re leaving from Bethel Island, the best destinations are Frank’s Tract and Old River, with excellent birdwatching and fishing for bass. 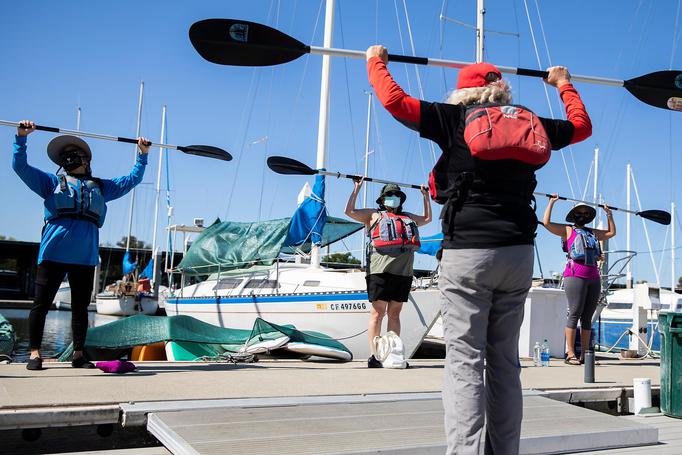 Which California lakes are best to visit this summer?...

The case for visiting Loch Lomond in Santa Cruz...

Guide to trout fishing in Northern California in the...

The delta, of course, is filled with a matrix of rivers, sloughs, cuts and coves. To take advantage of this, Delta Kayak Adventures also offers trips in other areas: Out of Wimpy’s Marina on the Mokelumne River to Delta Meadows Lost Slough; out of Brannan Island State Recreation Area at Decker Island; out of Hogback Island for Steamboat Slough and out of Tiki Lagoon to Spud Island.

One trick is to time your departure so you are paddling with the tide. Leave at the bottom of the outgoing tide, so you will be paddling the same direction as the tide downstream. Then, on the return trip, you will either face slack water during the tide change or get a push from the start of the incoming tide.

For those looking to escape traffic jams on highways — or major recreation lakes with low water levels — look no further than the miles of wide-open space on the delta.