Warhammer 40,000: Battlesector review — We fight and die for the Imperium

We will never have a Warhammer 40,000 RTS as good (or, God-Emperor forbid, better than) Dawn of War 1. However, Slitherine has tirelessly published TBSs set in Games Workshop’s premiere franchise for some time now, and its shown its skill in choosing which good small devs to take aboard. That’s how we have Black Lab Games, the creator of absolutely awesome Battlestar Galactica: Deadlock, presenting us with Warhammer 40,000: Battlesector.

The time? Somewhere around 999.M41. The place? Baal, the home world of the noble yet vampiric Space Marine chapter of Blood Angels. Countless space locusts of the Tyranid Hive Fleet Leviathan assaulted the system, held back by the super human strength and sacrifice of Angels and their successive Chapters. Even then, the galaxy split in half and a massive demonic gate had to spawn with legions that attacked both Angels and bugs for this to end. And now, an Indomitus Crusade fleet with newly crafted Primaris Blood Angels is here. It’s up to veteran Sergeant Carleon to both test his new brothers and eradicate the last traces of the star-borne swarm.

The swarm has no right to live

So, that’s the story you’ll explore in the single-player campaign of Warhammer 40,000: Battlesector. On the more mechanical side of things, it’s a turn-based game where you control up to 20 units at a time. The unit stats go pretty deep, and each member of a squad has their own HP track. All units have separate movement and action point pools, plus a Momentum pool. Though, outside of heroes, units have only a single AP.

The Momentum pool is a fun new addition to the formula. Each faction has a different way of gaining Momentum, but once the bar is full, the unit can launch either an empowered version of an ability they have or gain an AP to spend. Take the Blood Angels, for example. They gain Momentum from kills (counting individual members of enemy squad). The closer they are to the target, the better. This means that you want to get close and stuck in. Another impetus to play aggressively is that you lose 10 Momentum if you go on overwatch and 20 if you end your turn with AP remaining. Luckily, AP can be spent to move an extra square. Do you see what I mean about game motivating aggressive action? Getting that sweet momentum juice flowing got me out of some sticky situations, so you can’t really ignore it.

Sisters of Battle gain momentum from kills like everyone else, but their focus on martyrdom means that momentum flows while being attacked as well.

Outside of Momentum, Warhammer 40,000: Battlesector has you contend with armor values, optimal ranges for your guns, overwatch, special pistol overwatch, zones of control, melee engagements, cover, environmental modifiers, and more. However, it is never overwhelming (coincidentally, that’s what a melee effect where an attacking unit pushes the defender out of their hex is called), and the game gives you only the data you need and when you need it.

Good mechanics all around

Oh, and since the folks at Black Lab Games made Battlestar Galactica: Deadlock into a fantastic turn-based/resolution game, in the more traditionally TBS Battlesector you don’t have to wait for one unit to finish their actions before telling another one what to do. It’s a great benefit both for moving a large amount of troops around and for looking cool when multiple attacks go off at the same time.

Having discovered Genestealers – who lack any ranged capability – locked in a room they can’t escape from, the Astartes and allied Sororitas employ the ancient “Fish in a barrel” protocol

Something that I enjoyed immensely in Battlsector is how often the firing ranges for Marine infantry would reach across the screen. Hellblasters, the plasma spam unit, basically want to be as far away from the enemy as possible. Sure, some units come armed with woefully short-ranged pistols, but, that’s how pistols are in real life, and those are usually melee units who are slavering for someone to dare and come close.

How can I describe the play style of the Blood Angels? Well, most of their units are quite tough and adept at ranged combat. Even the basic Intercessor unit can threaten pretty much anything outside of the fattest bug heroes. Tyranids, on the other hand, are more melee oriented, squishy, and have poisonous tricks up their sleeves. Their troops are either trash chaff or really meaty monsters.

I’ve been reading the rulebooks since 4E, I have opinions

My greatest complaints when it comes to faction design are two-fold. First, Warhammer 40,000 is famous for allowing you to kit out units like you want. And while you can change the primary weapon for some of the units, that’s the end of customization. You don’t have sergeants leading the unit, and you don’t have special weapons mixed into the squad, which is a flaw that many TBS games carry. At least the lack of special weapons is understandable, as that’s how Primaris Marines operate on the tabletop (not that it’s any less dumb there).

The range on those madlads!

The other bit requires a bit more of a Warhammer 40,000 nerd touch, but bear with me. The ranged units are absolutely incapable of melee, to the point where they can’t even initiate it. Typical TBS stuff, to be sure, but we’re talking about Space Marines and specifically the Blood Angels, here. Each Space Marine is a superhuman killing machine, equally adept at shooting as well as punching. But if a squad of Termagants is to charge some Intercessors, the Marine counter attacks would be mere slaps.

This was the same criticism I leveled at the much earlier Warhammer 40,000: Sanctus Reach, where bolter-armed, mono-weapon Grey Slayer squads (veterans of Space Wolves, another Space Marine Chapter enthusiastic about rip and tear) couldn’t even punch a Grot. 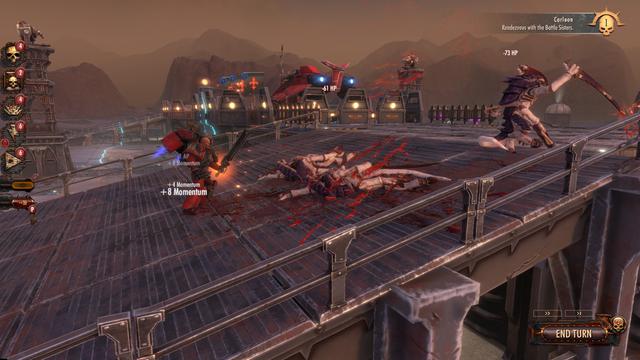 Saint Sebastian Thor, save us from dynamic map campaigns

Ah, but if we’re comparing these two titles, I’d say that Warhammer 40,000: Battlesector is a much more polished version of Sanctus Reach, save for one thing: campaign progression. Allow me to explain. In Sanctus Reach, individual unit survival mattered because units collected XP and earned upgrades. In Battlesector, upgrades are bought army wide, and getting replacements costs nothing. The only way to track which units were with you for the longest time is to look at which missions they were present for.

But in mechanical terms, it doesn’t matter. Sometimes the game itself will boot old units from your rosters, essentially deleting them to free space for the new types unlocked in the mission. And while the upgrade trees are flavorful and open up a lot of options, this means that a fresh Intercessor squad and the one that you kept alive through the entire campaign will be entirely identical once they’re on the field for the final boss battle.

That’s the biggest flaw in the otherwise excellent campaign. Warhammer 40,000: Battlesector follows in the footsteps of Dawn of War 1 and not its shameful progeny. There’s only a campaign for a single faction, no RISK maps, and you have character musings before the mission, dialogues during it, and some comments afterwards. Instead of the “freedom” to dynamically retread skirmish maps endlessly with the barest thread of plot holding it together, you have bespoke missions with bonus goals that gift you more points to unlock upgrades. Even better: there’s a smattering of Sisters of Battle that joins you partway through the campaign, reminiscent of the Imperial Guard you saw in some of the Dawn of War 1 missions!

I love it! This makes the campaign a lot more intimate, gives me more investment in the heroes and the story, and shows that the developer put in the work. In fact, it didn’t even waste our time with dumb boss fights (I will never forgive Dawn of War 2 for the “random infantryman in a light tank” boss fight, nor will I forgive the ending battle of Retribution). If you need to whack a specific unit, it will act under all the usual rules for it, and the difficulty isn’t to chip through its health bar while learning the attack sequence, but to get close to it through the swarms of Tyranids.

Tyranids are stupid, and the AI may be as well

That said, I have to wonder about the balance of the game. In the campaign, the biggest issue was with some of the shooty Nid monsters that can almost erase a squad per turn (remove “almost” when the squad in question is Sisters), which is very rude. Meanwhile, in the Skirmish mode (or multiplayer), nothing is stopping you from taking 12 Tyranofexes and a single Hive Tyrant of the Flyrant variety (so loathed in 7E) to a 2,000-point game and absolutely demolishing an opposing combined arms force. You also take 14 Hellblasters to destroy that previously mentioned force without losing a single Marine (that’s right, not a unit — a Marine). Of course, that list can probably countered by having a lot of chaff unit where using five squad members a turn isn’t that much of a big deal.

Units don’t magic away their melee weapons when shooting, so the devs had to get creative with bolter-armed Sister Verity here, and I love it.

This may also be an AI issue, though, not as big as Gargoyles using their flight ability to cross as many Zones of Control as possible and getting shredded on their own turn.

On the third hand that will get me in trouble with the Inquisition, what I really care about is the single-player campaign. And if Deadlock is anything to go by, we’re looking into years of quality DLCs.

The beauty of Warhammer 40,000: Battlesector

Getting to the artsy-fartsy side of things, Warhammer 40,000: Battlesector looks great. Some of the environments of Baal Secundus can look a little sparse, but overall the levels look atmospheric and very ‘Hams. If their presence is anything to go by, the Goliath truck has been a boon to any level artist wanting to put civilian vehicles on the table. Aside from that, the models are fairly detailed, even if Carleon himself displays how weirdly proportioned GW’s Space Marines have been since before the introduction of Primaris. There are plenty of combat animations to go around, rounds missing a target may be striking plausible obstacles and in the way, and there’s plenty of blood. Shame about no synch-kills like in Dawn of War 1, especially when you have plenty of time to enjoy them up-close, but even that series abandoned them.

I used this beautiful bridge map for the Tyranofexes Rule The Day play test. Note that my score is 31:0, meaning I have destroyed a third of the enemy force without suffering any casualties.

The audio in game is great as well. Its music may be the weakest link, but only because the soundtrack is unremarkable. I absolutely love the fact that all dialogue in the game is voiced. It’s a level of craftsmanship strategy games don’t always receive. Another thing most non-AAA titles lack? Unit barks. While Warhammer 40,000: Gladius – Relics of War (I get tired even thinking about typing that out) eventually made do with text ones, Battlesector has voiced lines in spades. My favorite? Inceptors shouting “Only Angels have the right to fly,” while gunning down a swarm of Gargoyles. Imagine that, a game that made me say a nice thing about goddamn Inceptors. Now that is something to behold!

Recommended to any faithful servant of the God-Emperor

All things considered, Warhammer 40,000: Battlesector is a good game. Sure, there are some quibbles here and there, but I don’t see other developers delivering anything better. And if a small minority of voices say this is but an upgraded Sactus Reach? Good, Sanctus Reach is a great game, and this one improves on it in many ways. You’re just proving me right when I say that Black Lab Games should have been given the Battlefleet Gothic license.