What are Heirlooms in Apex Legends?

While playing Apex Legends, you may have come across customization options known as Heirlooms. You may have also seen streamers or professional players sporting unique melee items while they play. These stylish upgrades are some of the most exclusive items in the game and they come at a high price.

Here’s everything you need to know about Heirlooms and how to get them in Apex.

As described by the game, Heirlooms are “unique cosmetic melee weapons” for the game’s legends. Each one can only be equipped by the particular legend it was designed for and it replaces the appearance of that character’s fists in-game. Heirlooms also replace the usual melee punch animation of each legend. Caustic’s Death Hammer Heirloom, for example, causes him to swing his hammer while melee attacking, while Bangalore’s Cold Steel Heirloom causes her to slash her knife out in front of her.

Some Heirlooms are lore-based. Lifeline’s Shock Sticks look like drumsticks, which is a reference to her history as a drummer in a band, while Pathfinder’s Boxing Gloves reference his boxing prowess and the Pathfinder’s Fight Night area on the Olympus map. Others are simply there for design or simple character references, like Octane’s Butterfly Knife.

How do I get an Heirloom?

Each Heirloom costs 150 Heirloom Shards to unlock and includes an exclusive stance and intro quip for that character. While this sounds relatively simple, Heirloom Shards can only be found in loot crates—and they have a one in 500 chance of dropping from a crate, according to EA’s Apex Legends FAQ page. This means that you’re guaranteed one set of Heirloom Shards in every 500 loot crates. But when crates go for $1 apiece, it can get expensive to purchase them. The drop rate remains the same regardless of whether a loot crate was purchased or earned through progression.

If a loot crate contains Heirloom Shards, the total amount in the loot crate is enough to purchase one legend’s set. The reason why so many pros and streamers seem to have them is simply that they play the game more than most fans, which maximizes the number of loot crates they get through progression. Some players have also gotten frustrated enough that they’ve spent ample amounts of money on loot crates to get their favorite legend’s Heirloom.

Does every legend have an Heirloom?

No. Right now, only a handful of legends have a corresponding Heirloom. While more are added each season (like Revenant’s Dead Man’s Curve from season nine), Respawn hasn’t gotten to every legend yet, particularly since the number of legends in the game continues to grow. Right now, the following 10 legends have their own Heirloom: 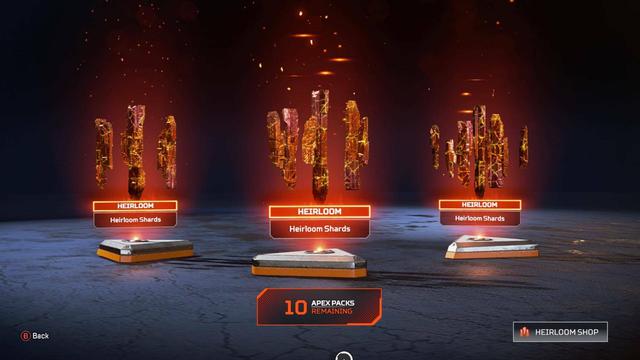 Mirage: Too Much Witt

It’s unclear which legend will be getting their own Heirloom in season 10, but since the season just started, there’s plenty of time for the surprise to be revealed. Right now, the best way to get an Heirloom is to cross your fingers and clutch your lucky charm of choice the next time you open a loot crate.