This week has been a painfully tumultuous one for World of Warcraft's Horde players. On Tuesday, Blizzard released

that filled in a critical but missing plot detail in who was responsible for razing the night elf stronghold of Teldrassil. Horde players expected a big twist but were instead treated to the horror of watching their own warchief Sylvanas Windrunner order the burning in a seemingly hotheaded, last-minute decision.

While Horde players aren't exactly a friendly bunch, the faction takes honor seriously and burning thousands of innocents to death didn't go over well with the players. For days, the World of Warcraft subreddit and forums were alight with posts viciously criticizing Blizzard, with some players going so far as

to the game in protest. It was a bit ugly. Then, late last night, Blizzard released a stunning six-minute cinematic that has changed everything.

Called "Old Soldier" (embedded above), this gorgeous CG cinematic is a quietly contemplative and heavily character-driven cutscene that finally gave Horde players some context for what was happening to their faction. Though World of Warcraft has a reputation for amazing cinematics, this one in particular stands above the rest. In it, orcish high overlord and veteran of the First, Second, and Third War

stands on the walls of the Undercity contemplating why he fights, while just a short distance away, Alliance siege towers loom in the darkness. The Siege of Undercity is the final chapter of the controversial The War of the Thorns pre-expansion questline that players will fight through early next week. And, as those already in the beta know, it ends on a rather disturbing note.

Even if you don't fully understand the motivations of each character, this cinematic is bursting with the context that Horde players were dying for when they stood on the shores of Darkshore and watched Teldrassil burn earlier this week. A large part of their complaints with that moment was how none of the other Horde leaders seemed to question Sylvanas' rash decision to murder countless night elf innocents. For many Horde players, it felt like they were the only ones with any sort of conscience or sense of honor—they suddenly felt ideologically opposed to their own faction. It was a jarring, upsetting moment that players reacted to with scathing vitriol.

Old Soldier, however, acknowledges and gives voice those feelings. While on the walls of the Undercity, Varok Saurfang speaks with a lowly troll shaman (whom players have lovingly taken to calling 'Zappyboi') and slowly reveals his disillusionment with the Horde and Windrunner's leadership. He validates the discontent Horde players have felt during the prologue for Battle for Azeroth. As key moments from his past—like the death of his son—come back to haunt him, Saurfang strips off his pauldrons to show his unwillingness to fight for Sylvanas.

And now, Horde players are doing the same. It's obvious that most Horde players despise Sylvanas and believe she is unfit to rule as warchief. Though no one knows exactly what Blizzard has planned for the overarching story of Battle for Azeroth, Horde players are keen to have a leader that actually represents core values of honor that binds the faction together. Someone like Varok Saurfang.

Over on the World of Warcraft

encouraging Horde players to take off their shoulder armor as a sign of solidarity for Varok Saurfang.

in particular breaks down the protest in an easy to understand way.

World of Warcraft's 'transmog' system lets players use the stats of one piece of armor but have the appearance of another so they have total control over they look. And, using that system, these players can also hide a piece of gear entirely. It's a rather silly way to protest but it's the only way disenfranchised Horde players can express themselves in-game short of organizing actual protests (which would be awesome). "As players, we really don't have any action in the story," 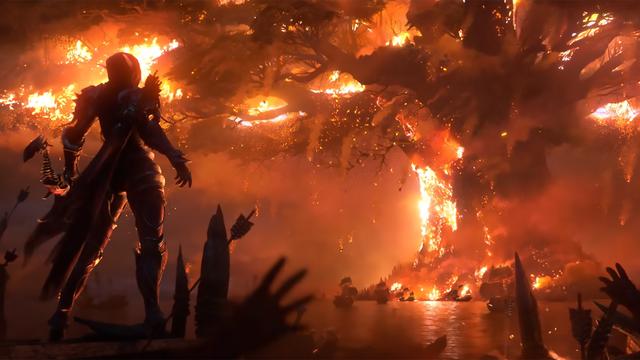 . "We accept the quests, go where it points us, and kill what it tells us to kill. There aren't many ways to express our characters through gameplay—transmog is one of them. Having an actual movement to hide shoulderpads as a way of showing support for Saurfang and his ideals would be absolutely fantastic."

Even Alliance players are getting in on the fun. "I will honor fair fights against Horde who hide shoulders and not gank them if already engaged in a fair fight,"

. "The rest don't deserve that honor."

"As an Alliance [PvP] player, I'll be avoiding fights with any shoulderless hordies,"

One of the chief leaders of the movement, a redditor by the hilarious name of Fresh_Pancake, is using World of Warcraft's

to organize the event. Added in the recent 8.0 update, Communities are similar to guilds but aren't as structured and players can be in several of them at once. If you're on the Thrall-US server, you could also join Fresh_Pancake's new guild which also champions Saurfang as the new Warchief. There's even a Discord channel called Shoulders for Saurfang 2018 that already has over 60 protesting Horde players involved.

If you're not a World of Warcraft fan, this all might seem rather silly—and it definitely is. But World of Warcraft is first and foremost a roleplaying game and I love that players are responding in-character to their issues with Blizzard's storytelling. It also shows how passionate players are about the Warcraft story even after 14 years. Battle for Azeroth wants to reignite the conflict between the Alliance and Horde, but until recently one side didn't seem to have much pride (or honor) in that fight. Players were concerned Blizzard was merely painting the Horde as the bad guys of Battle for Azeroth but the Old Soldier cinematic shows there's more nuance to find here. I'm deeply invested in seeing how all this comes together in Battle for Azeroth and beyond.

Since its release last night, the tone of the subreddit and forums has changed considerably. The outrage has subsided and some

players are even telling others to apologize

for how they reacted to Sylvanas' Warbringers cinematic. People seem happy again and

Zappyboi memes are taking over

. It's fascinating how six minutes of an old orc talking to a young troll can seemingly change everything.

The Old Soldier cinematic is excellent but it also shows how inconsistent Blizzard's storytelling has been in the lead up to Battle for Azeroth. By going from animated shorts to fully computer-generated cinematics—not to mention related books and novellas

—Blizzard is making it exceptionally tough to understand the nature of this war and the motivations of its chief characters. It's been an emotional roller coaster for World of Warcraft players but the ups and downs don't necessarily feel like the result of masterful storytelling. It feels like whiplash.

Steven enjoys nothing more than a long grind, which is precisely why his specialty is on investigative feature reporting on China's PC games scene, weird stories that upset his parents, and MMOs. He's Canadian but can't ice skate. Embarrassing.