While some argue they ruin the authenticity of Classic, for others it makes the game playable. Addons might not seem a divisive issue but that’s gaming in 2021 for you.

Addons changed the game in Classic. With key addons from Retail WoW making the transition over to Classic and other addons springing up to plug gaps in the quality of life. With Classic being out for nearly two years now, we head into TBC with a diverse selection of addons to look at.

In this guide, we’ll look at some key areas of focus. From questing and maps to professions and UI and most things in between. We’ll focus on one main selection and give some details while offering up at least one alternative.

Picture the scene; you load up Classic ready to go on your first big adventure. You speak to that quest giver who sends you off to kill some Kobolds. But, you’re not 100% sure what way north is or what a cave looks like. So you quickly check your map for a rough location, maybe a few dots to see where to go. But wait... there’s nothing there, you’re alone without guidance. Thankfully, Questie has your back and is here to save the day.

It’s a good job I had this addon, as I have no idea what a Golem is.

Thankfully, Questie fixes all that reading quest text nonsense (don’t worry, you’ll still do a lot wrong even with Questie if you don’t read quests). But by providing you with some of those missing map features, Questie gives you a lot of the functionality you’re missing from retail. Questie isn’t perfect, it might not play well with some other addons (looking at you Azeroth Auto Pilot) and it can be a little misleading at times.

Alternative - QuestHelper - Basically the same thing, some people may prefer the UI.

Essentially an on-the-fly boss mechanic addon. BigWigs, and its dungeon counterpart LittleWigs, will display boss fight information during the fight. This includes timers, warnings, and even create in-game markers on important mobs. While a lot of boss fights in Classic were very short, and often the need for such addons became redundant, towards the end of the expansion, and into TBC boss mechanics got a little more tricky. Regardless, if you plan to raid, you’ll need this addon or one like it.

Atlas Loot is an essential addon for those of us who dream of getting all those shiny purple items from raids. We can look longingly into the future and proclaim “I will have that hat”. While Atlas Loot won’t increase your drop rate, it will help you decide what dungeons to prioritize. If you’re a tank, it can even help you avoid bosses that don’t drop tanking loot, because you’re the tank and people have to do what you say after all.

If you just look at the Judgement Crown long enough, you might just get it.

The addon isn’t just for dungeons, either. It will list all loot from factions, crafting sets, PvP, and all raid tier sets. There’s not really an alternative to Atlas Loot, either. Honestly, that’s it. It does exactly what it says on the tin.

We’ve included these two together because it’s a case of one addon doing both jobs. Over the years Details! has gone ahead of its damage meter competition, which is good because that’s what the addon is for. Addons like Recount used to be the most popular, but after dropping support in retails, Details! has come out swinging. With the release of Classic, Details! made the move and has become a firm favorite of the scene.

If you use this in Classic TBC you’ll mostly be seeing purple and green. Don’t worry that’s not a bug; those classes are just that good.

As for TinyThreat, this is one where you might prefer a specific addon rather than a plugin. But for ease of use, by using the TinyThreat plugin, you can simply make a new details window, as the TinyThreat addon comes with Details!

Alternative - Recount for damage meters and Omen for threat. 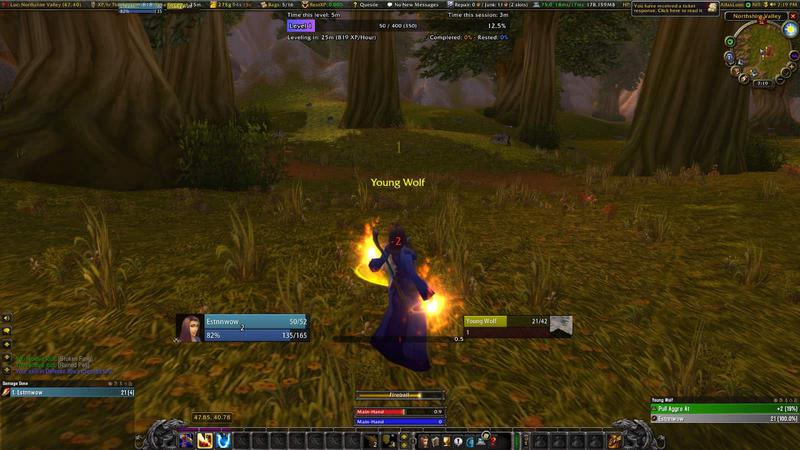 Unit frames are a popular part of World of Warcraft, and Z-Perl is probably the most popular, especially if we look back at Vanilla. Originally called X-Perl, the new addon came back for Classic and has been downloaded over 10 million times already. Another popular addon in this section, and it deserves special mention, is ElvUI. Z-Perl is more an alternative to the standard UI (see below) whereas ElvUI is more like a full rework of the entire WoW design.

For Unit Frames, you’ll need to find what fits you. Some people like something much more simple, personally I use Shadowed Unit Frames, which much like Z-Perl is a much more minor change to the overall look, mostly just tidying up the standard look.

Alternatives - Unit Frames on CurseForge. It’s best to just look through everything here and make up your own mind.

Map addons are another common in Classic due to the aforementioned Questie addon. Atlas, and its many variations, are near essential when it comes to displaying things in Classic. Dungeons and Battlegrounds are major exceptions for maps in Classic, with the areas completely hidden with the exception of the minimap.

The addon isn’t quite as good as what the retail client map is able to show, Atlas, alongside Atlas Loot gives you a fantastic look at dungeons, battlegrounds, and world locations. It’s a crucial addon for some, especially those coming from retail WoW and needing to feel a little more at home.

One of the most powerful addons in Classic, Titan Panel adds a small bar to the top of your screen but it displays so much useful information. The addon can display lots of information such as your location, gold, repair status, and how many bag slots you’re using. Another aspect is that Titan Panel will move addons from clustering your minimap and put them onto the bar instead.

A simple bar that adds a lot of power.

A sign of a required addon is normally when Blizzard merges it into the live game. Atlas Loot, Atlas Map, and Titan Panel are all addons that saw use in the live client. While Titan Panel was only used for one expansion (WoD) for the Garrison, it proves how simple that little information bar was. The other way of knowing you’re using a good addon is when an entire category on Curseforge is named after it.

Auctionator is one of the most popular addons to make the very clunky auction house in Classic a lot more usable. The standard UI for auctions is... less than ideal, and if you’re used to the now improved retail version then Classic is a tough ask. As you can see below, Auctionator is a great fix for this and allows you to list auctions quickly as well as tracking historic data.

A simple Alt + Left Click will place your item or stack it into the left window and scan the auction house for other listings. You can also search for an item and rather than listing it, instead buy the listings (the large bottom box). It’s not perfect, and the addon is a fan edit of the retail version, but while it’s still supported it remains the most usable.

Alternative - TradeSkillMaster - A much more powerful alternative to Auctionator but one that requires a lot more understanding to use and come to terms with.

Attune - Probably one of the most useful addons in Classic. It has an amazing in-game UI that allows you to track exactly what part of the quest chain or unlock you’re at. Of course, if you want to read a detailed guide on how to attune to Karazhan or Dungeons, you can check our guides.

Prat 3.0 - Prat is a powerful addon that helps to filter out some of the spam you see in chat.

Postal - Postal does a lot of things, but it basically makes your interactions with the mailbox a lot easier. Better bulk mail opening, logging your past mail interactions and making sure you’re not mailing the wrong person.

OneBag3 - The addon does basically what it suggests. It consolidated your bags down into one giant bag, allowing you to search your bags and color your items based on their rarity.

GatherMate2 - GatherMate tracks all your Ore and Herb pickups and displays them on your map. If you want some extra help, you can also download a GatherMate data pack, the one from Wowhead is a good start.

WeaponSwingTimer - An addon that is crucial for anyone playing melee or hunter. Making sure not to clip your auto-attacks and ranged casts. While the addon is less useful for casters it’s a very powerful little bar.

WeakAuras - One of the biggest game-changers for Classic was WeakAuras. An addon that’s almost a defining part of retail WoW the addon came to Classic and changed the game. We’ve decided to put it at the bottom because the addon itself has no power without Wago.io and the thousands of custom strings made by the community.