www.thegamer.com Destiny 2: Every Weapon In Season Of The Chosen

Updated February 10, 2021, by Sean Murray: With Season of the Chosen's arrival, we now actually know what some of these mystery weapons are. This article has been updated with that information.

Season of the Chosen is shaping up to be a rather large season for Destiny 2. A new game mode was added, Adept weapons were added to Grandmaster Nightfalls, and new loot was made available for Guardians to chase.

RELATED: Destiny 2: 10 Ways To Prepare For Season Of The Chosen

Unlike Season of the Hunt, Bungie went out of their way to include as many new weapons as possible. Guardians now have 35 new guns to chase, 41 if you include Adept variants. Some of these guns are completely new, while others are reprisals from vanilla Destiny 2. Let's go over every weapon Bungie has added in Season of the Chosen.

Season Of The Chosen Weapons

Ticcu's Divination: A Solar Bow that fires three arrows with each attack. Each arrow tracks targets independently of one another.

Ticcu's Divination is obtained at rank 35 of the Season Pass for all players, rank 1 if you purchased Season of the Chosen. Season owners will obtain the mystery Tex Mechanica Exotic in a questline at a later date. It is currently unknown if a third, hidden Exotic is tied to this season.

Taking inspiration from the now-sunset Leviathan weapons, Season of the Chosen features Cabal-themed weapons that have a more rugged take on the regal arsenal fans are familiar with. Out of the six weapons tied with this aesthetic, only four are from the new Battleground game type. They are the following:

Code Duello: A High-Impact Solar Rocket Launcher with a shockingly similar appearance to Sins of the Past.

Browsing the Season Pass rewards on the Bungie.net website, we can deduce the two seasonal weapons that will be in the Season Pass: a Linear Fusion Rifle and Sidearm.

Threaded Needle: This Linear Fusion Rifle is Season of the Chosen's replacement for Line in the Sand, albeit with Void damage instead of Arc.

Instead of a vendor refresh every expansion, Bungie are refreshing the core loot pool slowly with every season, starting with Season of the Chosen. Players can expect two new weapons in each core activity—Strikes, Crucible, and Gambit—alongside a new Ritual weapon. Four weapons from Destiny 2's Year 1 period have also been added into the Umbral Engram system.

As a complete surprise to most players, Bungie have brought back four weapons from Year 1 of Destiny 2. These weapons can be obtained from Umbral Engrams focused on providing world loot.

Retrofuturist: A Lightweight Frame Void Energy Shotgun that can roll with the Dual Loader perk.

One Ritual weapon has been added in Season of the Chosen:

Salvager's Salvo comes with Quick Launch and Spike Grenades for consistent damage, and your choice of either Ambitious Assassin or Demolitionist in the first perk slot or Vorpal or Chain Reaction in the second perk slot. Any combination you choose will be fantastic on this weapon.

RELATED: Eyes Of Tomorrow Gets Massive Stealth Nerf In Destiny 2: Season Of The Chosen

Acquisition is the through either a Strike, Gambit, or Crucible quest similar to last season's Adored Sniper Rifle, and just like Adored, you'll later be able to get three playlist-themed ornaments.

Two weapons have been added to the Strike loot pool in Season of the Chosen:

The Third Axiom: An Adaptive Frame Arc Pulse Rifle. Curiously, this weapon is the same archetype and energy type as the Jian 7 Rifle.

Royal Entry: A Precision Frame Void Rocket Launcher, this weapon comes with a deep perk pool for some interesting possibilities.

Three weapons from the original Destiny will be obtainable as Nightfall-exclusive weapons in Season of the Chosen.

All three of these weapons also have Adept variants that have a chance to drop in Grandmaster Nightfall completions. Technically, this means Nightfalls are receiving six weapons.

Crucible has introduced a new Sniper Rifle and Sidearm for Guardians to earn and master. 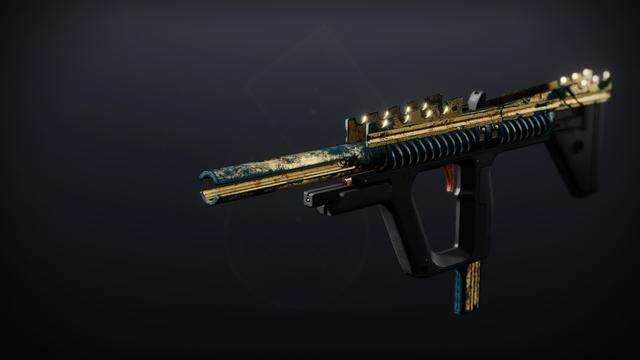 Gambit has also received two new weapons this season. Guardians can expect to find a Void 120 RPM Hand Cannon and Solar Fusion Rifle in this playlist.

Three new Trials of Osiris weapons have been confirmed for Season of the Chosen:

The Messenger: A reprised version of the same gun from Destiny 1, The Messenger is a High-Impact Frame Kinetic Pulse Rifle.

Caster Frame Sword: This is a Solar version of Temptation's Hook, featuring the same heavy attack and overall appearance.

Similar to the Nightfall weapons, these have Adept variants you can obtain from going flawless in Trials of Osiris.

It's also worth noting that all previous Trials of Osiris weapons (Astral Horizon, Exile's Curse, et cetera) also have new perk pools and an updated infusion cap. Even if you have all of these weapons, farming for duplicates will now yield new perk combinations. Any currently owned Trials gear from previous seasons were not changed to reflect these alterations.

Note that the last time we've seen a Rapid-Fire Frame Pulse Rifle in the Kinetic Slot was Autumn Wind back in Curse of Osiris! Everyone should farm for a good roll of The Time-Worn Spire when Iron Banner is active.

Four Dreaming City weapons have been reprised this season with a higher infusion cap:

RELATED: Everything You Need To Know About Destiny 2: Season Of The Chosen

In addition to the reprised weapons, completing encounters in the Shattered Throne dungeon will drop versions of these weapons that can roll with perks unavailable from other reward sources.

Similar to the Dreaming City, four Moon weapons have returned in Season of the Chosen. They are the following:

Premonition: A High-Impact Frame Kinetic Pulse Rifle. This weapon can only be obtained from the Pit of Heresy dungeon.

Just as with the Dreaming City reissued gear, completing encounters in the Pit of Heresy dungeon will drop versions of these weapons that can roll with perks unavailable from other reward sources.

Next: Destiny 2: Beyond Light Complete Guide And Walkthrough

Charles Burgar is an expert on all things tech and gaming. Graduating from Pikes Peak Community College in 2018 with an Associate of Science, Charles has spent his time dissecting popular video games, movies, and technology. With an understanding of games for as long as he can remember, Charles has a large interest in understanding what makes things fun. He is currently a Freelance writer for TheGamer and Game Rant.